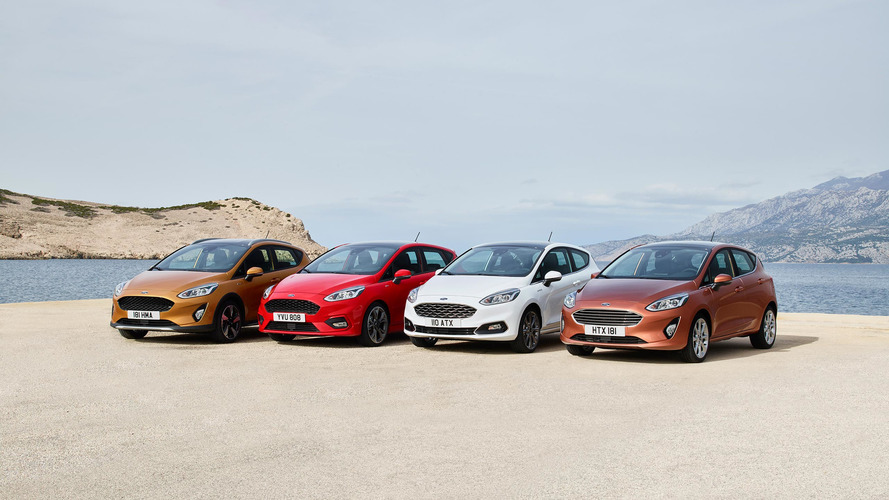 Ford is still holding back a lot of details about the little car.

Ford threw quite a party in Cologne, Germany, for the big debut of the new Fiesta. Unfortunately, the company is keeping details about the next-generation of its popular hatchback a secret for now.

So far, Ford will only confirm that the new Fiesta will be available in four versions in Europe. The Vignale will be the luxury trim; the ST-Line will be sporty; Titanium will go for style; and Active will take some utilitarian cues from crossovers.

Ford’s designers soften the Fiesta’s design slightly for the latest generation. The shape is clearly an evolution of the current model, but some of the edges now become somewhat rounder. The supermini looks a little bigger than its predecessor, but Ford doesn’t have info about the dimensions for us to confirm that yet. Photos show the availability of a massive moonroof that covers both rows of seats, and it looks like the Active gets a slightly higher ride height than the rest of the lineup.

Inside, the new model shows major improvements. The current Fiesta has a nice enough cabin, but the latest version has better styling and high-end materials. The eight-inch infotainment screen seems to float in front of the center stack. The system runs on Ford’s Sync 3 tech. According to Ford, Fiesta buyers will be able to choose more personalization options than ever before, including a high-end B&O Play stereo.

Ford has not yet released any official powertrain details about the new Fiesta. A range of small three- and four-cylinder diesel- and gasoline-fueled engines likely still comprises the lineup, though.

At this time, Ford is also not talking about a specific release date for the new Fiesta in any region, but we expect some markets to have it in the first half of 2017.

Multi-award-winning 1.0-litre EcoBoost petrol engine will be the first three-cylinder engine in the world to enhance fuel efficiency with innovative cylinder deactivation technology

Supported by members of the Ford teams from around Europe who have helped to transform the company, Ford at Go Further also:

Announced new cylinder deactivation technology for the the multi-award-winning 1.0-litre EcoBoost – an industry first for a three-cylinder engine

“Four years ago, at the first Go Further event, Ford promised a leaner, smarter business in Europe with great products and new technologies – and we’ve over-delivered through the talent, ingenuity and passion of our people,” Farley said. “We have delivered an all-new SUV line-up; set the performance car segment alight with our Focus RS and Ford Mustang; strengthened the backbone of our business with our award-winning commercial vehicle range; and re-written the rulebook on compact engines with our 1.0-litre EcoBoost – and that’s before we get to the next generation Fiesta.”

Not one, not two, but four fun to drive Fiestas
Ford revealed four distinctive production variants of the next generation Fiesta: the stylish Fiesta Titanium, the Ford Performance-inspired Fiesta ST-Line, the upscale Fiesta Vignale and the Fiesta Active crossover.

The expanded Fiesta range will offer more personalisation options to customers than ever before, and enhances the sporty, fun to drive character that has delighted generations of customers.

The next generation Ford Fiesta debuted with a spectacular unveil to music performed by the award-winning DJ Yoda assisted by a “YuMi” collaborative robot. Ford is among first auto makers to develop a new, closely integrated approach to car workers and collaborative robots working together on the assembly line. DJ Yoda and “YuMi” performed a setlist of tracks from 1976 onward in celebration of Fiesta’s 40th anniversary this year.