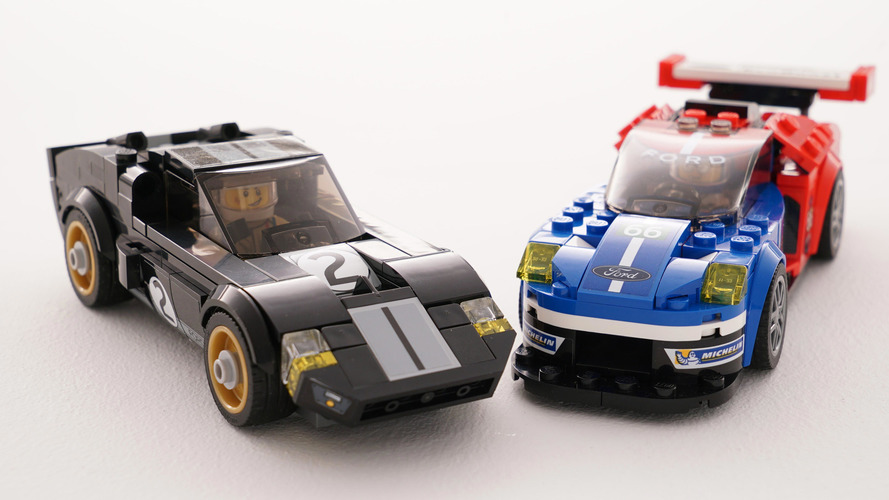 You won't need weeks of nightly work to put together these little cars, but they'll still look great on a shelf.

If you’re looking for a fun way to introduce someone to a pair of Le Mans legends, then check out Lego’s new kit in its Speed Champions line that offers models of the 1966 Ford GT40 and the 2016 Ford GT. It’s 50 years of racing glory in one package.

Lego aims these little rides at younger builders, but adult Ford fans would probably like them, too. Where many of the company’s auto models include over a thousand blocks and require hundreds of pages of instructions, someone could build these racers during a lunch break. In addition to the two Le Mans class winners, the set also includes a racing driver minifigures, a checkered flag, and a trophy.

The kit goes on sale in Europe on March 1, 2017, for 34.99 euros or 29.99 pounds ($38). There’s no word on availability or pricing for the United States yet, but Lego generally has similar release dates for the two regions. Motor1 has reached out to the company for exact details.

If this pair of racers are too small, you could always start collecting tens of thousands of bricks and recreate Ford’s 1:3 scale models of the GT40 and GT from last year’s 24 Hours of Le Mans. A team needed three weeks to build them, so the undertaking would probably keep a single person busy for the whole winter.

It’s too bad this kit isn’t available in time for the holidays, but Lego has plenty of other kits that would make great gifts. At $79.99, the company’s Caterham 620R is a fantastic look recreation of the sports car. The $99.99 Volkswagen Beetle is a cool scale model of the classic vehicle. At $299.99, the Lego Technic 911 GT3 RS packs a massive 2,704 parts and measures 22 inches (57 centimeters) long when complete.

Designing the exclusive kit was a “dream project” for LEGO design lead Craig Callum, a former car designer who races Fords in his spare time

The new LEGO Speed Champions set will include both cars as well as racing driver figures, a chequered flag and even a trophy to recreate those history-making victories.

“Many people in my team grew up with the legend of Ford’s history-making 1966 victory – and experienced the excitement of building and design for the first time through LEGO bricks,” said Dave Pericak, global director, Ford Performance. “This kit is a powerful way to tell our Le Mans story, and will hopefully inspire the race drivers, engineers, and designers of the future.”

Ford won at Le Mans earlier this year after returning to the scene of what was a historic 1-2-3 clean sweep 50 years previously. The LEGO Group worked closely with Ford’s design and licensing teams on every detail of the 1966 winning car, and the new Ford GT race car.

“This was a dream project – with a lot of pressure. The Ford GT40 is one of the most iconic race cars of all time, and the new Ford GT is just incredible,” said Craig Callum, head of design, LEGO Speed Champions. “Designed for children, but with grown-ups fans in mind too, we know these models will be closely scrutinized for authenticity.”

Callum, who in his spare time races a Ford Model A hot-rod, and started out as a designer of full-sized cars, helped develop ten prototypes before the final versions of each model were selected, all created from existing LEGO bricks.

You can watch Callum assemble the new kit in record time here: https://youtu.be/lauf-iym1zM