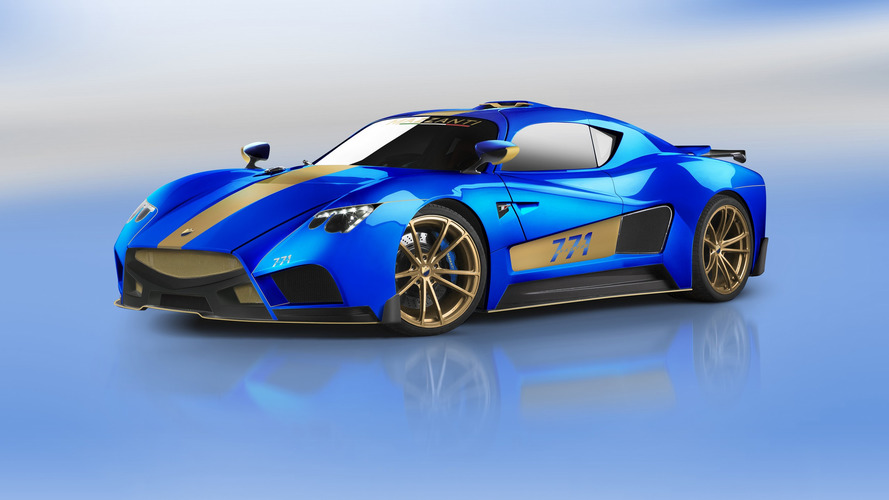 As you might have guessed already, it has 771 horsepower. Without turbo or electric boost.

Although it doesn’t look like it, the Mazzanti Evantra 771 comes from Italy where it will receive its proper launch this weekend at the 2016 Bologna Motor Show. Basically an evolution of the regular Evantra (not Elantra), the new version brings an extra 20 horsepower generated by the naturally-aspirated 7.0-liter, V8 engine for a grand total of 771 hp (575 kW), hence the model’s newly attributed suffix. There’s no word just yet about torque, but the standard variant generates 634 pound-feet (860 Newton-meters) at 5,000 rpm.

Performance details are shrouded in mystery at this point, although the extra punch might have slashed a tenth of a second from the sprint to 60 mph (96 kph), which in the case of the standard Evantra takes three seconds before the car maxes out at more than 224 mph (360 kph).

Besides getting more power, the new Evantra 771 also takes advantage of an upgraded aerodynamic package, including a reworked front splitter, different roof scoop, along with modified side mirrors and an updated rear wing. It’s also wearing a new two-tone livery and comes with some tweaks on the inside, although Mazzanti hasn’t released any images of the cabin so far.

Mazzanti mentions existing Evantras can be retrotiffted to the 771 specification, which is only a taste of things to come as the Italian marque says additional versions will be launched next year. The Evantra serves as the company’s entry-level model, if we can call a 771-hp car as being entry level.

The flagship model is the Evantra Millecavalli pictured above with 1,000 hp from an enlarged 7.2-liter engine with two turbochargers, prompting Mazzanti to say it’s the “most powerful street-legal hypercar ever built in Italy.” However, it’s not a regular model as production is capped at 25 units. It runs to 60 mph in a mere 2.7 seconds and can reach 250 mph (402 kph), at least that’s what the official specs are saying.

After the great success for the world premiere of the Hypercar “Evantra Millecavalli”, the Atelier of Luca Mazzanti is working on a new pack for the Evantra, called “771” which will be available from spring 2017.

Evantra Millecavalli is a totally brand new project and Mazzanti Automobili’s team was challenged to work and  develop every aspect; starting from the mechanics, focusing on the aerodynamics and designing a new interior with a dedicated digital dashboard and infotainment system.

Thanks to all the gained experience, an important update for the Supercar Evantra was developed. The pack “771” remarks the muscular lines of the Supercar. The new aerodynamic developments are present all over the body: the new splitter in the front, the renewed air intake on the roof, the design of the mirrors and the rear wing which improves the aerodynamic efficiency, also refreshing the style.

The interiors reflect the personality and the exigencies of each client; the design is updated too, making this version “771” looking more similar to the Hypercar Evantra Millecavalli. The choice of adopting new digital elements as well as more simple styles, underlines the unique characteristic of all the Mazzanti cars to be extremely customizable, appearing as blank portraits on which the client is guided in drawing his or her own wishes.

The pack “771” interests also the mechanics: the 7.0 L V8 naturally aspirated engine gets and increase up to 771hp (from which the pack gets the name) with the aim of making the driving experience of this Supercar even more unique.

“The new pack 771 brings Evantra one step ahead” Luca Mazzanti Explains “we increased our resources to bring this project to life and the inspiration came directly from the project of the Hypercar Evantra Millecavalli which is now facing the advance stage of development. The pack 771 interests all the aspects of the Supercar, from the increase of 20 hp to the actual power of 751 hp, to an important development of the aerodynamics and the aesthetics of the interiors. This is another step forward for the most exigent clients who desire an Evantra far from its classic design and closer to a race project. Moreover, this solution allows also the current owners to update their own Supercars. The pack 771 will be available for the Supercar realized from 2017 on, or customizable for the previous versions. This is just the beginning; in the next months there will be several news on which we will keep you informed regularly..”