Chevy Corvette ZR1 gets spied from the sky 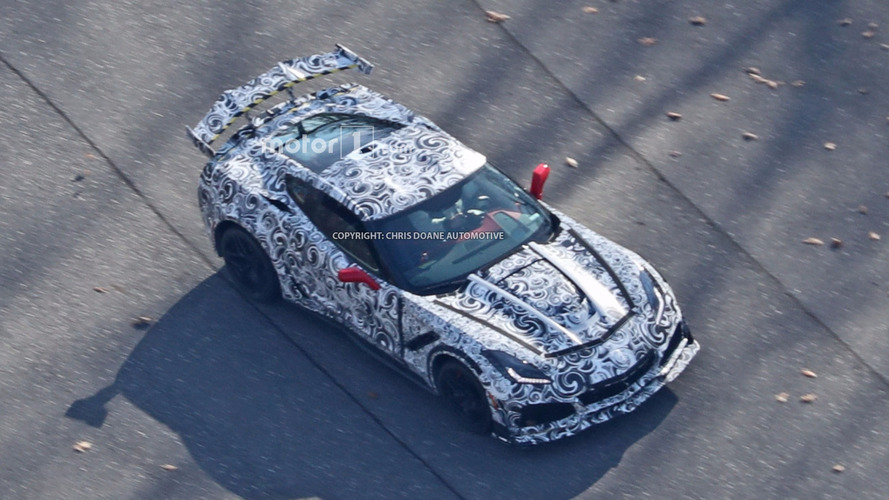 The meanest C7 of them all looks absolutely fierce.

While it’s working on a mid-engine Corvette C8, Chevy is also putting the finishing touches on the hardcore ZR1 version based on the current, front-engine model. Seen here are a couple of prototypes with less disguise than ever giving us the opportunity to check out the extreme aerodynamic package. As you can easily notice, the range-topping C7 will likely be available with two types of rear wings, with the taller one likely to be offered through an optional package bringing other aero upgrades. Also visible is the abundance of testing equipment installed behind the seats, signaling some big changes are in tow for the ZR1.

Moving at the front, there’s an aggressive bumper with large air intakes to provide cooling for the uprated engine. Speaking of which, the hood’s big bulge likely means there’s a supercharger lurking underneath, although some reports are indicating the Corvette ZR1 will feature an all-new biturbo “LT5” engine also bound to be used by the mid-engine C8.

If it will stick with the supercharged 6.2-liter V8 LT4 from the Z06, chances are the Chevy’s engineers will throw in a larger supercharger to bump power. Regardless of the engine it will use, rumor has it output will easily exceed 700 horsepower (522 kilowatts).

Besides the aero pack and beefier engine, the ZR1 will host an assortment of other upgrades, including larger alloy wheels backed by bigger brakes to match the extra grunt. Some tweaks inside the cabin are expected as well, but obviously the hardware revisions will be the model’s key selling points.

General Motors trademarked the “ZR1” moniker earlier this year with the US Patent and Trademark Office, thus indicating the ultimate Corvette C7 will indeed revive the nameplate attributed to the top-spec ‘Vette.

Expect the Chevy Corvette ZR1 to make an appearance as early as January at the North American International Auto Show in Detroit.