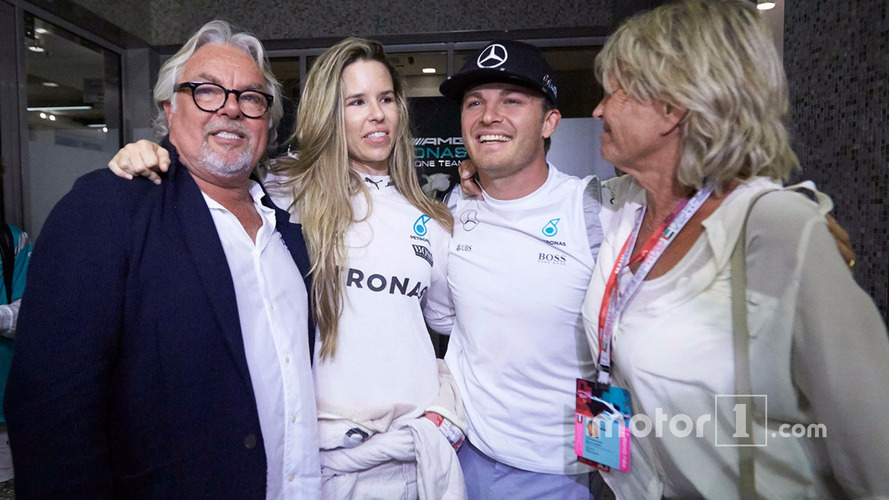 It has taken him six years and for his son to win the championship for him to speak to the media again, but 1982 Formula 1 champion Keke Rosberg was back in the spotlight on Sunday in Abu Dhabi.

While Nico Rosberg followed in the footsteps of Damon Hill to become the second son of a world champion to win the title, it was his father Keke who actually made a bit of history as he watched the race a few hundred kilometres away.

For Rosberg Sr., who has deliberately kept a low profile in recent years to not interfere in his son's career, became the first champion to actually be alive to watch his son triumph.

With the title in the bag, Rosberg made the swift trip down to Abu Dhabi to join the celebrations with his son – and end a self-imposed ban on interviews that had been in place for quite some time.

"My role is one of private support," he said speaking to media in the paddock. "What you forget is that I haven't made one interview since six years – since Jan 1, 2010. This is the first time – and it was hard to avoid today."

Motorsport.com heard then what Rosberg had to say.

Q. Where were you these last few days?

KR: A hotel and partially at a friends' house today.

KR: I think the time had come to take a step back. There was no choice to come here, because if I was to come here for three days doing nothing, there would not have been a peaceful minute for me. So we discussed with Nico and said: 'Look, I can't come. It doesn't work.' So that is why I didn't come.

Q. Did Nico know where you were?

KR: Yes. Nico knew all the time. I don't think he knew exactly where I was, but he knew I was in Dubai.

Q. How did you react to the race when Lewis was backing Nico up in those final laps?

KR: I took a deep sip from my beer and thought this was going to get hot.

Q. What did you make of the Verstappen moment?

KR: He sorted it out himself in the first corner, didn't he? But maybe they will start educating him one day. He is a very talented guy but he needs a little bit of guidance. He is throwing away great results all the time. And F1 is all about results.

Q. Is it hard watching Nico? Do you feel the same emotions as him?

KR: Of course. Wouldn't you as a father?

Q. You are of course the only world champion to have seen his son win the title...

KR: Yes as someone said, the only alive one. Just!

Q. Did you imagine that this day would ever come?

KR: I thought it would come. But, I had a rule when I came to F1 that there are three things you want to achieve. You have to win your first race, you have to win Monaco and you have to win the championship. And that is what I said to Nico. Now you can sort of put a cross on it and say it is done – I've been there and done that.

Q. Is his driving style different to yours?

KR: He has a better car.

Q. How do you think he has become so psychologically strong?

KR: I don't know. It is remarkable. I admire him for his mental strength and his commitment. You have to remember that the commitment of someone like Nico, I don't know how the others do that, is like 110 percent. It has nothing to do with how we went about being an F1 driver. Absolutely nothing.

Q. Does Mercedes having two champions in the team change the dynamics there now?

KR: I don't know if it changes, but a happy man performs always better than an unhappy man. I think he will raise the game a little bit next year like everybody does. Jenson [Button] did it when he won the championship. I did it. That will probably happen. It goes with the game.

Q. Nico seemed to get very emotional talking about you?

Q. What matters more to you – your wins or Nico's?

Q. Nico talking about you sending him text messages every Saturday night saying 'pedal to the metal'...

KR: It is a bit difficult because you have to say something, but what do you say? Don't spin at the first corner? You can't do that. So you try to keep spirits up and enjoy. It is a sport and it has to be enjoyed. The pressure should always be less than the enjoyment.

Q. Do you think he has had a tough time in F1 going up against so many great drivers?

KR: It goes with the game. In 2014 he could have won the championship here already. He has been there or thereabouts. Of course the last three years have been tremendous, under tremendous pressure, because you are fighting for the win every weekend.

And you are fighting for a championship every year and DNFs hurt you really big time. A steering wheel in Singapore sitting on pole doesn't go down well. But that is the nature of this sport.

When I was racing we used to say one less when you saw a guy standing on the roadside with a blown engine – more points. That is how it was those days. Now of course the cars are so reliable that every DNF is like a big disaster. In our days it was normal every day life.

Q. Is it easier to win the title nowadays than it was in your day?

KR: No. It is not easier nor more difficult. It is just a completely different game. If you take tennis today, it has nothing to do with how tennis was 30 years ago. Today it's a precision game and you need to be tall and have power and this and that – it is the same thing here.

Q: In your title year, you won one race and the championship. Lewis has won 10 races and lost the title...

KR: That is correct. But Lewis' difference is that to the next best, he has plus 50bhp, I had a deficit of 250bhp at that time….so you cannot really compare the eggs. The eggs looked the same but they were quite different in those days.

Q: What do you say to people who claim that Nico is a lucky champion?

KR: I thought Lewis was lucky twice already, so why shouldn't he [Nico] be once. If you want to win the championship in F1 you cannot have a lot of bad luck. I could have won the championship in Monza, I needed to finish fifth but the rear wing fell off – from a Williams. Can you imagine?