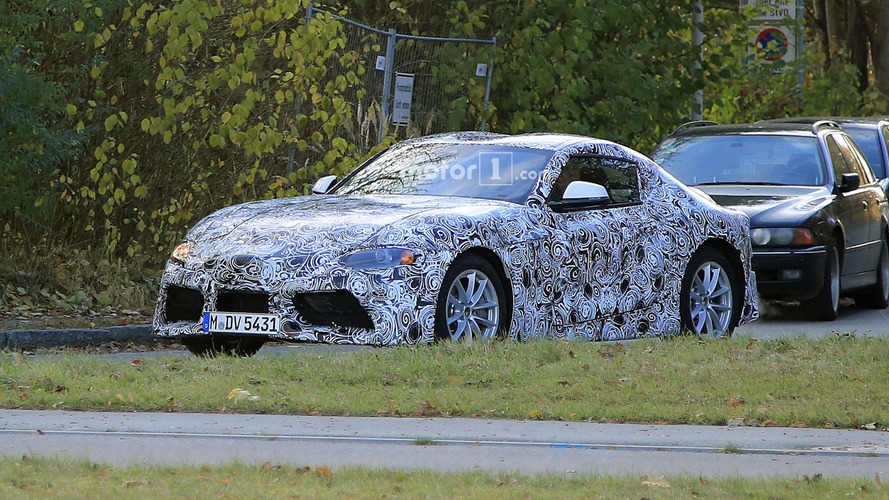 Massive vents up front, large spoiler at the back. Double-bubble roof in-between.

The much-awaited Toyota Supra revival has made a comeback in a fresh batch of spy images showing a slightly less disguised prototype. It now has more production bits than ever, such as the front bumper with its large side air vents flanked by a smaller central vent to aid cooling of the engine. It looks like the double-bubble roof is here to stay and we are also able to observe the car is considerably smaller than the BMW Z5 roadster.

Either the wheels were small or there was something going on with the test vehicle’s suspension setup since from the side profile it doesn’t look quite right with that gap around the tires. Moving at the back, you will immediately notice the the dual exhaust tips and the prominent trunk lid spoiler. For the first time, it seems the resurrected Supra has the production model’s horizontal taillights, although that’s probably not the final design.

Overall, the exterior design will likely resemble the FT-1 concept introduced almost three years ago at the North American International Auto Show in Detroit. The similarities between the two are already showing up, but obviously the production car won’t look as exciting as the concept before it.

The high-performance coupe will allegedly use BMW engines and will receive a range-topping version with an electrified powertrain taking advantage of Toyota’s hybrid know-how.

Magna Steyr’s factory in Graz, Austria will take care of production, following the “Boyota’s” double debut likely to occur in the second half of next year. Combined annual production is expected to stand at approximately 60,000 units and it is believed the Z5 will eventually receive a coupe derivative later on.

Bear in mind that Toyota hasn’t actually confirmed plans to bring back to life the “Supra” moniker, so there’s a distinct possibility it is going to be called something else. It's the same story with BMW and its new roadster.