Hamilton insists he did nothing unfair in Rosberg battle 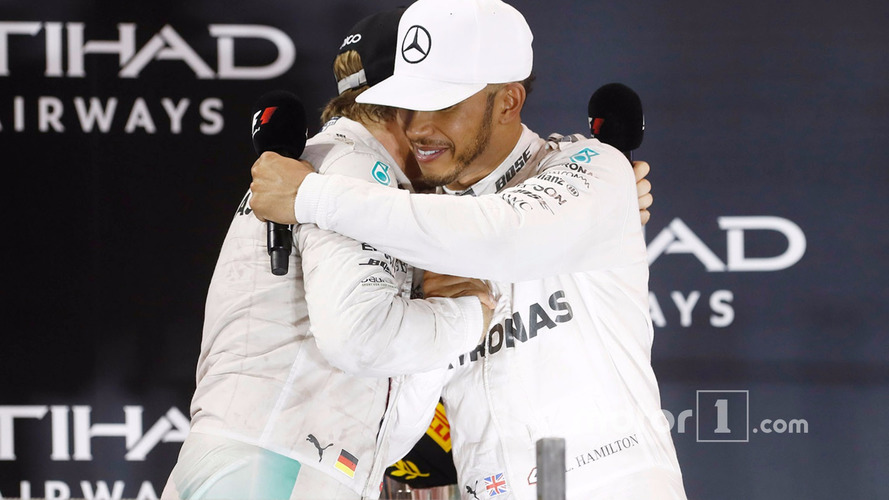 Lewis Hamilton insists he did nothing unfair when trying to back teammate Nico Rosberg up into his rivals during the Abu Dhabi Grand Prix.

The British driver was asked by his Mercedes team to pick up the pace several times during the race as he drove slowly to try to get his rivals closer to Rosberg, who was running second behind him.

Hamilton, who needed Rosberg to finish in fourth to beat him to the title, appeared annoyed on the radio after he was instructed to drive faster, saying "right now I'm losing the world championship so I'm not bothered if I win or lose this race."

In the end, the tactics did not work, and Hamilton lost the title by five points despite winning his 10th race of the year.

Despite defying Mercedes' orders, the three-time champion felt he did nothing wrong.

"We were fighting for the championship, I was in the lead so I control the pace. That is the rules."

Hamilton said that, despite Mercedes' warnings about Sebastian Vettel being a threat unless he picked up the pace, he had the race under control all the time.

When asked if he was annoyed by the instructions, he said: "Not really. I don't know why they didn't just let us race.

"There was never a moment where I feel I was going to lose the race. It is a shame that it is quite clear their thought process... and I don't have much to say to be honest.

"I was hoping he [Vettel] would close up but his tyres were going off towards the end and Nico drove well to not make mistakes.

"It was pretty chilled at the end. It may have been intense for you but not intense for me. For me, I am in a position where I had a lot of points lost during the season so for me I am out there fighting and generally never try to do anything to harm the team or the brand.

"But we won the constructors' championship so it was down to me and Nico today. However they felt they still needed to make comments. We will discuss it afterwards as we all do."

The Briton praised Rosberg's job this season, saying the German had done a "fantastic job."

"I did everything I could," added Hamilton. "Obviously Nico had a very clean year without any real issues to be honest. That is why we sit in this position right now.

"He did a fantastic job, congratulations to him. It's a great feeling to win the championship."

Gallery: Hamilton insists he did nothing unfair in Rosberg battle