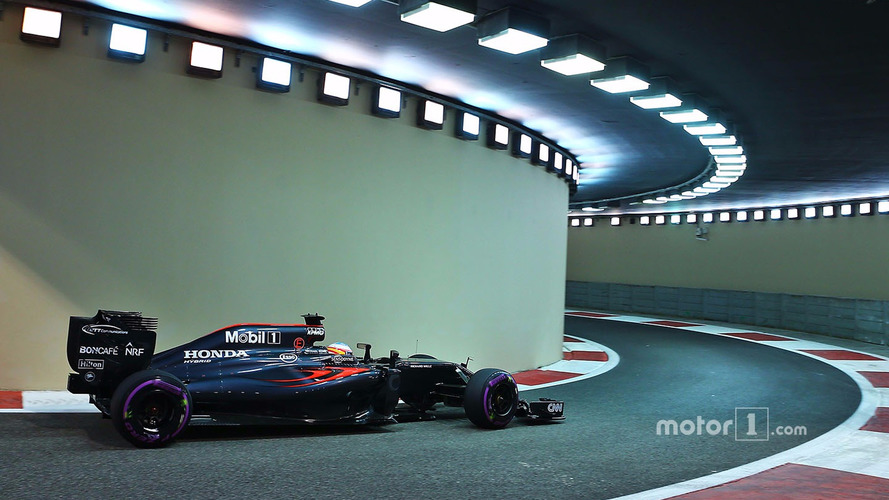 Sunday's F1 race at Yas Marina Circuit comes to an end. Here are the results.

Lewis Hamilton won the Abu Dhabi Grand Prix, despite trying to back up his Mercedes teammate Nico Rosberg into the chasing pack, but it wasn't enough to deny the German his first world title.

Rosberg only had to finish third to clinch the championship, as the pair entered their second title showdown in three seasons. In winning the title, he matched his father Keke's feat 34 years ago.

Hamilton tried all he could in the closing stages to back Rosberg up into the chasing Ferrari of Sebastian Vettel and Red Bull of Max Verstappen – who made a remarkable comeback from a first-corner spin – but to no avail.

In their final F1 races, Williams's Felipe Massa and McLaren's Jenson Button suffered contrasting fortunes. Massa finished in the points in ninth, Button was forced out with a suspension failure after he hit a kerb too hard.

Story of the race

Hamilton led Rosberg through Turn 1, with Kimi Raikkonen's Ferrari taking third from the supersoft-shod Daniel Ricciardo (Red Bull) and Vettel, as Verstappen spun at the first corner and down to last after making contact with the Force India of Nico Hulkenberg.

Hulkenberg passed Force India teammate Sergio Perez for sixth at Turn 1 at the start of lap two. In the battle between the Williams, Valtteri Bottas passed Massa for ninth on lap three.

Hamilton eased out of DRS range of Rosberg by lap five, while Ricciardo remained in Raikkonen's DRS but didn't have the top speed to make an attack.

Bottas reported: "Something is wrong in the rear damper, car is jumping like hell."

Massa repassed Bottas at Turn 14, with the Finn pitting on lap seven.

Meantime, the recovering Verstappen regained his place in the top 10 on lap seven.

Hamilton pitted to ditch his ultrasofts for softs at the start of lap eight, as did Raikkonen – which held up Hamilton's departure. Hamilton rejoined in front Verstappen.

Rosberg pitted a lap later, allowing Ricciardo to lead on his supersofts, and this time it was Vettel coming into the pits which held Rosberg's release.

Rosberg rejoined just ahead of Raikkonen, but behind Verstappen.

Ricciardo pitted at the start of lap 10, switching his supersofts for softs, and rejoined right behind Raikkonen. Ricciardo attacked at Turn 8, while Verstappen defended second hard from Rosberg.

By lap 11, the top five were covered by 5s. Rosberg was warned to not fight with Verstappen, and to look after his right-front tyre.

As the dusk descended, Hamilton was warned his tyres were losing temperature and could suffer from graining. He stayed well clear of Verstappen, however, with Rosberg clear of the battling Raikkonen and Ricciardo, with Vettel holding on in sixth.

Ricciardo launched a huge attack on Raikkonen into Turn 11, briefly getting ahead but overshooting, and allowing Vettel to get right on his tail.

Rosberg attacked Verstappen from a long way back at Turn 8, and then outpowered him through the second DRS zone to seal the deal by Turn 11.

Verstappen pitted on lap 22, switching to softs from the supersofts he started on. Rosberg soon started setting a string of fastest laps, pulling clear of the Raikkonen, Ricciardo and Vettel battle, as Mercedes realised Verstappen had switched to a one-stop strategy.

Ricciardo pitted to try and undercut past Raikkonen on lap 25, with the Finn responding to the threat a lap later – but Ricciardo's pace got him track position on the Ferrari.

Verstappen had to overtake Perez on track, which delayed him in his race against Rosberg – whose string of fastest laps saw him pull well clear.

Ricciardo then passed Perez, which helped him stay clear of Raikkonen.

Hamilton made his second stop with a 3s lead over Rosberg, which briefly gifted Rosberg the lead for a lap before he too pitted.

Vettel, who decided to run a long second stint, now led from Hamilton and Rosberg, with Verstappen fourth ahead of Ricciardo – who set a string of fastest laps during this phase to pull clear of Raikkonen.

Hamilton slowed his pace at this point, allowing Rosberg to get within a second. His engineer asked, "Question: Just wondering why you're so slow. Currently unsafe to Vettel."

After his glory run at the front, Vettel pitted on lap 38 for his final stop, rejoining on supersofts, dropping him back to sixth.

Ricciardo caught Verstappen for third, while Raikkonen let Vettel past for fifth with 13 laps remaining. Vettel was lapping 2s quicker than the leaders at this point, and Hamilton was again told to up his pace.

Vettel caught Ricciardo, and DRSed past him with nine laps to go.

At this point, Rosberg complained of Hamilton: "This is a slow pace. He is very fast in Sector 1 so it is hard to pass."

Hamilton was told: "This is an instruction: We need 45.1s to win this race."

"I suggest you guys let us race," he replied.

Verstappen was catching Rosberg by over half a second a lap, with Vettel right behind him.

With five laps to go, Hamilton led Rosberg by 0.8s, with Verstappen and Vettel now in range.

Vettel passed Verstappen with four laps remaining, and set his sights on Rosberg.

Paddy Lowe then radioed Hamilton: "We need you to pick up this pace, that's an instruction." But Hamilton pointed out he was leading and was comfortable with his pace.

Vettel got into Rosberg's DRS range with three laps to go.

"Right now I'm losing the world championship so I'm not bothered if I win or lose this race," said Hamilton, as Vettel attacked Rosberg behind him.

The top four were within a second at the start of the final lap, but Rosberg got DRS off Hamilton – which helped him stay ahead of Vettel.

Hamilton won the race, with Rosberg, Vettel and Verstappen right behind.

Ricciardo was fifth, ahead of Raikkonen, Hulkenberg, Perez, Massa and Alonso – the latter having made a crucial move on Haas's Romain Grosjean on lap 18.

Grosjean had a wheel-banging session with Toro Rosso's Carlos Sainz at Turn 11, which left the Frenchman "fed up" with the Spaniard's tactics.

In other collisions, Manor's Esteban Ocon hit Felipe Nasr's Sauber at Turn 12, sending a piece of Nasr's wing flying, and Ocon and Manor teammate Pascal Wehrlein got together in the closing stages.

As well as Bottas's problems, Kevin Magnussen needed a new front wing on his Renault after the opening lap, and he was forced to retire with a front suspension issue.

Button was forced out on lap 13: "Something feels wrong with the steering… We've got a failure guys," he reported following a front-right suspension failure. "I don't think we've ever had a failure like this."

Daniil Kvyat put the seal on a wretched weekend for Toro Rosso, when he pulled off on lap 16 with a gearbox problem.

Palmer punted Sainz into a spin at Turn 17 with 12 laps to go, and Sainz had to retire with a broken gearbox soon after. Palmer was given a 5s time penalty for causing the clash.