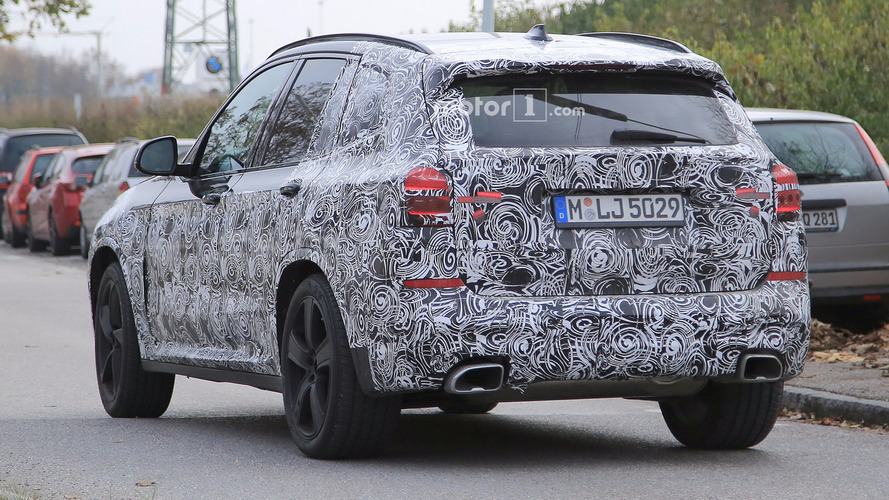 A standard prototype has been caught on camera as well.

Even though the two test vehicles are wearing a substantial amount of swirly camouflage, it’s easy to notice the beefier variant equipped with the M Sport Package thanks to its blue brake calipers and those two menacing exhaust tips. In addition, the prototype rides on larger wheels and up front it has a more aggressive bumper with larger vents.

By the looks of it, the third-generation BMW X3 will grow in size and so far it is giving us the impression that it’s almost as big as the previous X5, although we’re not entirely sure about that. One thing is certain, the kidney grille will grow in size a little bit. Despite the enlarged body, Bavaria’s next compact crossover will lose a few as a result of switching to the CLAR platform making more extensive use of lightweight materials.

Should the X3 fitted with the optional M Sport Package not suffice, you’ll be happy to hear there’s going to be an X3 M for the very first time in the model’s existence. It has already been spotted stretching out on the Nürburgring (where else?) and some say it will have as much as 500 horsepower, so it should be able to put up a good fight against the Mercedes-AMG GLC 63.

Sitting right below the X3 M is going to be an M40i version, but we all know the bread and butter of the range will be the diesels, topped by a possible M40d model. A plug-in hybrid derivative is likely on the agenda as well, ahead of a full electric variant coming out in 2020.

It’s going to take a while until the M version will be out since BMW will wait about a year or so following the standard model’s introduction towards the end of 2017. Production will take place not only in United States at the Spartanburg factory, but also in South Africa.