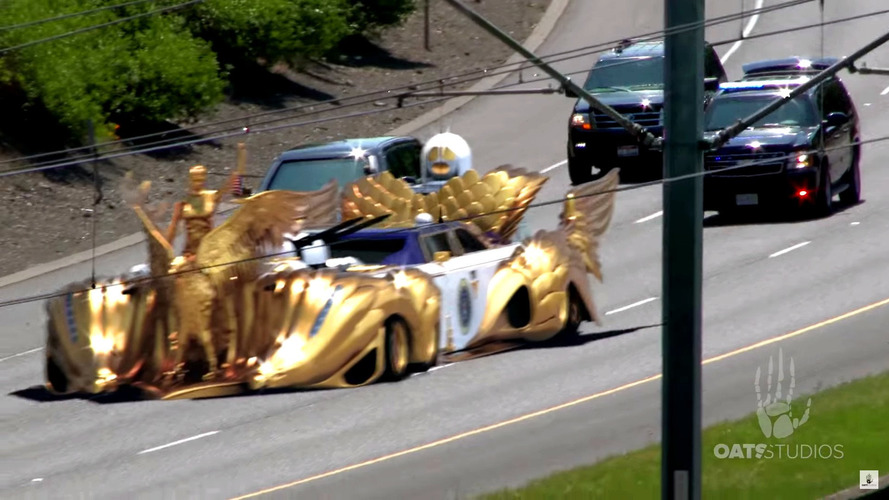 Hopefully the President-elect won't take any ideas from these clips.

President-elect Trump’s taste in design is a bit… sudden. Brash, if you will. Some would even say tacky. After all, this is a man whose penthouse home is almost entirely lined with gold leaf. Even his bed sheets. Probably.

Not doubt Trump will think the White House is rather drab in comparison. The presidential transportation, too. Only time will tell if he turns Air Force One into Bling Force One, but in the meantime, a Hollywood movie director has offered a couple of ideas for how President Trump might, err, switch up his official rides.

Trump probably wouldn’t be too happy about rocking a plane built in Europe, but the massive guns and caterpillar tracks on this Airbus A380 give off a “don’t mess with me” vibe he would definitely approve of. Plus, as it is the biggest plane in the world, he could fit in all those essential things that there is simply no space for on the current, tiny Boeing 747. Like, err, an arboretum.

Then there is the limo. Which is part stretched sedan, part Batmobile, and part casino fountain. No doubt that statue at the front, stood astride an eagle, bears Trump's own face. The tableau is rather reminiscent of a Roman emperor, riding into Rome in triumph at the head of his army.

There is no armament no view, but the eagle’s breast probably conceals an enormous cannon.

The government has commissioned a new Air Force One and limo - which was recently spotted testing - but it is not known when they will enter service.

Blomkamp first posted the clips on his Instagram account, then added these hi-res versions to Youtube. His films depict a dystopian future in which a small elite oppresses large sections of society that eventually fight back. Read into that what you will.