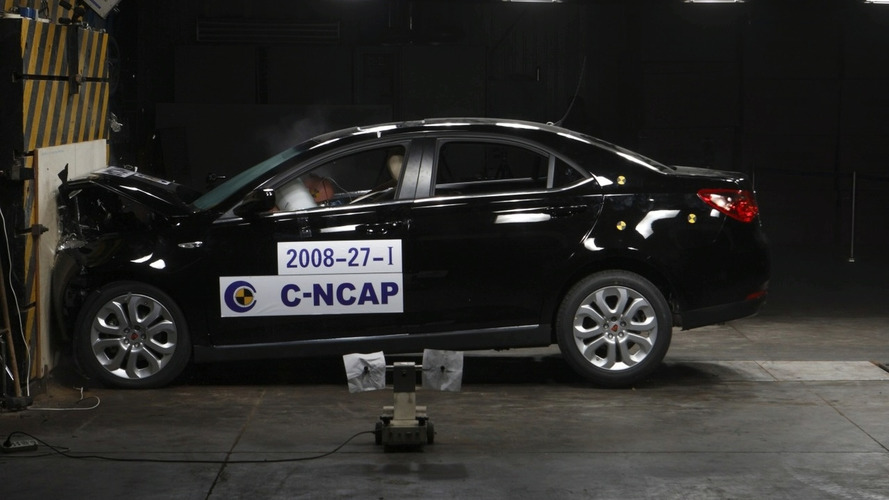 Video of the Chinese made SAIC Roewe 550 being smashed up in crash testing has surfaced. The car has received a five-star crash rating, tied for the highest of any Chinese-made car.

The SAIC Roewe 550 has received a five-star crash rating from the Chinese arm of the European New Car Assessment Programme (EuroNCAP). C-NCAP, in conjunction with the China Automotive Technology and Research Center in Tianjin, China, gave the rating on six-star scale.

Here you can see video of the Roewe 550 being tested in front of journalists and photographers. Within one minute and 14 seconds, you see the Roewe 550 smashed up in three different tests, with a normal speed and slow-motion shot of each impact.

This ties the mark for the safest rated Chinese car. The Chinese-made Chery A3 and a car by Hongqi have also been awarded the ranking. Foreign autos Mercedes-Benz C200, produced by a joint venture called Beijing Benz-DaimlerChrysler Automotive, and the FAW-Volkswagen Bora have also received rankings at that level, according to an English-language newspaper in China.

C-NCAP tested 28 cars this year, in four batches of seven models. The safety rankings have drastically improved over the last two years, with 46 percent of vehicles receiving a five-star rating in 2008. That is an increase of 10 percent on 2007 figures, and a 38 percent increase over 2006.

Such dramatic increases leads one to speculate on the integrity of the tests. Still, over thirty percent of models tested in 2008 got two- or three-star rankings, according to the China Daily. The China Daily is a state-run newspaper in the People's Republic of China.

The Roewe 550 is based on the Rover 75, using a chassis with reduced length.