An American truck for a very American record.

Yesterday wasn’t Independence Day nor was it Flag Day, but even so Ford decided Saturday morning would be the appropriate time for the 2017 Ford F-450 Super Duty to establish a new and very patriotic Guinness World Record for the “World’s Largest Flag Pulled by a Moving Vehicle.” It was a successful attempt after pulling a 45 by 92 foot (4,124 square feet) U.S. flag. The record-breaking attempt took place at Homestead-Miami Speedway’s 1.5-mile track in Florida and it took down the previous record established on September 28 by a Chevrolet with a 3,203 square feet flag at Texas Motor Speedway.

The torquetastic V8 6.7-liter Power Stroke turbodiesel engine with its 925 pound-feet (1,254 Newton-meters) and 440 horsepower (328 kilowatts) enables the truck to tow a maximum of 32,500 pounds (14,741 kilograms), so you can imagine it had no problems whatsoever towing the immense U.S. flag.

There were a few conditions the F-450 Super Duty had to meet in order to establish a new record, one of which was to travel beyond the 328 feet (100 meters) previous record mark and it had to do it without the flag touching the ground at all. That it did by covering a certified distance of 360 feet (109 meters) without the flag every hitting the track. The truck actually covered four full laps around the circuit where the Ford Championship Weekend takes place and where the truck is going to put on a show this afternoon as part of the festivities organized before the start of the Ford EcoBoost 400 NASCAR Sprint Cup Series championship race.

In order to make it all happen, Ford had to build 45-foot riggings from eyelet to eyelet to enable the 2017 F-450 Super Duty haul the U.S. flag, which was launched and retrieved by a team of 20 people. 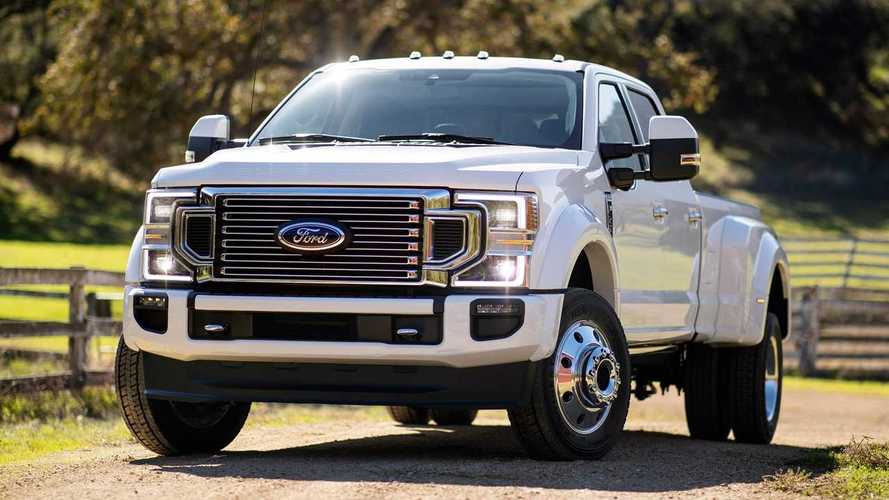 The record eclipses the previous mark set earlier this year by Chevrolet with a 40 by 80-foot flag at Texas Motor Speedway on September 28th.

With its 6.7-liter Power Stroke® turbo diesel V8 producing a best-in-class 925 lb.-ft. of torque and 440 horsepower, the F-450 displayed an exceptional level of towing power that Ford truck owners have come to expect from the top-selling truck series in America.

“At Ford and with Ford trucks in particular we are used to being number one,” said Doug Scott, Ford Truck Group Marketing Manager.

Towing the largest banner here today and setting the Guinness World Record in the category certainly fits with our DNA and what we are all about when we talk about Ford trucks and their towing power. This is a great accomplishment, another to add to the list of distinctions. Earlier this week we received the 2017 Motor Trend Truck of the Year award so we will add this to the list.”

Ford is no stranger to patriotic displays at Ford Championship weekend, utilizing the F-Series line of trucks to fly the U.S. flag as part of pre-race activities since 2003. However, Saturday’s practice session for Sunday was special, as the United States flag flown by the F-450 Super Duty for the record-setting drive measured 45’ by 92’ feet.

To set the record, the truck had to travel beyond the 100 meters (328 feet) previous record mark, without the flag touching the ground. The F-450 more than exceeded that requirement, officially covering a verified distance of 109 meters (360 feet) and also completing four full laps around the Homestead-Miami Speedway 1.5-mile oval, site of NASCAR’s championship event, Ford Championship Weekend.

To accommodate the record setting flag, 45-foot riggings from eyelet to eyelet were constructed

enabling the F-450 a driving roll-out of the massive flag. A team of 20 launched and retrieved the flag, ensuring it did not touch the ground.

The F-450 will put on an encore performance on Sunday afternoon as part of the pre-race festivities prior to the Ford EcoBoost 400 NASCAR Sprint Cup Series championship race live on NBC at 2:30 pm (ET).