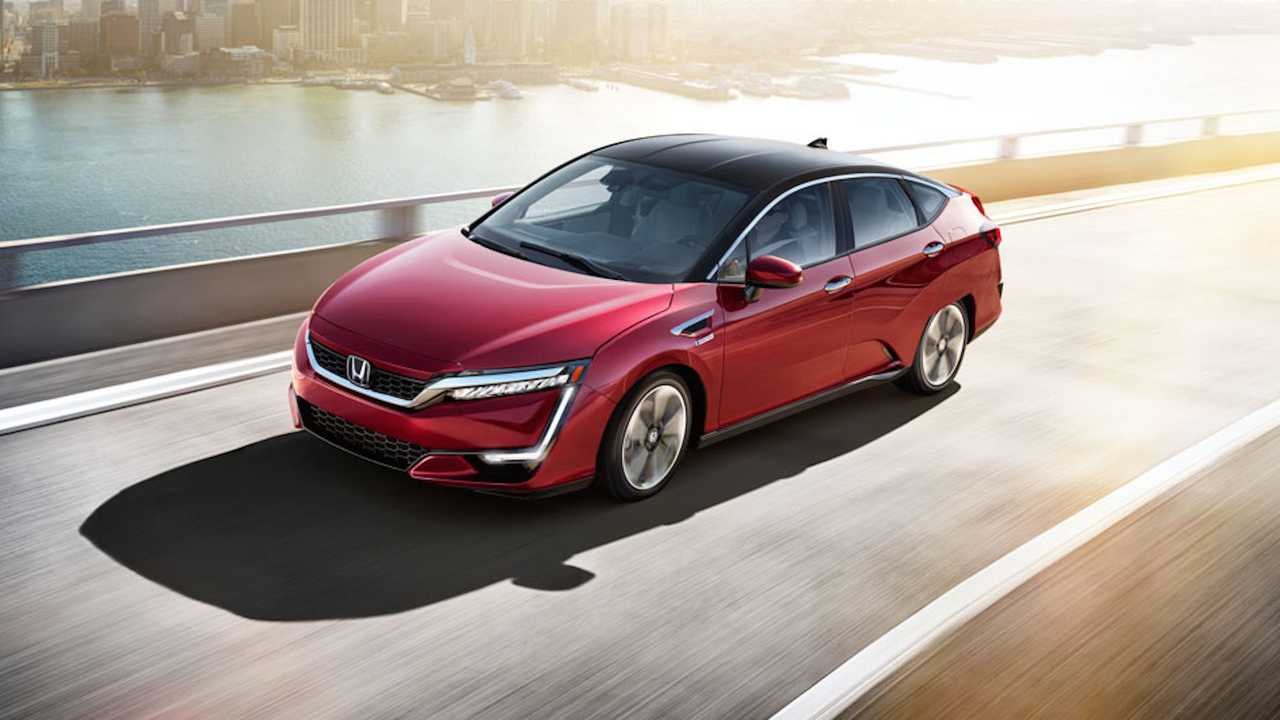 Honda's hydrogen-fueled sedan arrives in California before the end of the year to challenge the Toyota Mirai and Hyundai Tucson Fuel Cell. Which one would you pick?

Honda’s fuel-cell-powered 2017 Clarity sedan arrives at dealers in California before the end of the year, and the automaker is now announcing very competitive lease rates and amenities against the other FCEVs already on the market there. Honda is offering its zero-emissions sedan for a $369 a month plus $2,499 due at signing for a 36-month lease. For that price, customers get an allowance of 20,000 miles a year, $15,000 of free H2 fill-ups over the length of the contract, and 21 days of luxury car rentals in California.

Because of the lack of hydrogen infrastructure, the Clarity is only available to customers who live or work near one of Honda’s 12 approved FCEV dealers. There are six locations in Southern California, five in the Bay Area, and one in Sacramento. As the refueling network improves, the company plans to sell the sedan in more areas.

The Clarity looks futuristic with its low-slung design and prominent LEDs at the front. It comes with the full suite of Honda Sensing driver-assistance tech and seating for five inside. The EPA estimates the EV can go 366 miles (589 kilometers) on a full tank of hydrogen and refuel in around five minutes.

Honda has been offering fuel-cell vehicles since the FCX in 2002 and FCX Clarity in 2008. However, the company was somewhat late to the party for the latest generation of them like the Toyota Mirai and Hyundai Tucson Fuel Cell.

The Mirai is likely the Clarity’s nearest competitor, and their specs are quite close. Toyota offers a 36-month lease for it for $349 a month and $2,499 due at signing. Like the Honda, customers also get up to $15,000 of complimentary fuel over the term of the contract, and the company's comes with seven days of free rentals each year. The automaker has eight dealers offering model in the state. An EPA-estimated range of 312 miles means the Mirai can’t quite as far as the Clarity, though.

Alternatively, the Tucson Fuel Cell is also available in California for $499 a month for a 36-month lease and $2,999 due at signing. It also comes with free hydrogen refueling. With 265 miles of range, the crossover can’t go quite as far as the Toyota or Honda. However, Hyundai will add two more FCEVs to the lineup by 2020, and they’ll possibly compare better with the competitors.

Up to $15,000 of hydrogen fuel for the three-year lease duration

TORRANCE, Calif. –  Honda today announced a competitive introductory lease price of $369 a month for 36 months (plus tax) for the Clarity Fuel Cell sedan, which is coming to dealerships in California by the end of 2016.  The lease requires $2,499 plus first month's payment at lease signing (not including tax, registration or official fees). The lease terms include an attractive mileage allowance of 20,000 per year, up to $15,000 of hydrogen fuel, up to 21 days of an Avis Luxury Rental in California, and 24/7 roadside assistance.

Retail leasing will be available to residents who live or work near Honda's network of 12 approved fuel cell vehicle dealerships located in select California markets. This network includes six dealerships in Southern California, five in the Bay Area and one in Sacramento. Honda will further develop its dealer network as consumer friendly hydrogen fueling stations become available.

The Clarity Fuel Cell received an EPA driving range rating of 366 miles and fuel economy rating of 68 MPGe (miles per gallon of gasoline-equivalent) combined, giving it the best range rating of any zero-emission vehicle, which includes fuel cell and all-electric cars, in the United States.

Customers interested in the Clarity Fuel Cell are encouraged to visit http://automobiles.honda.com/clarity, where they can receive more information and sign up for the opportunity to become a Clarity Fuel Cell customer.

About the Honda Clarity Fuel Cell

Technological innovations to the Clarity Fuel Cell have created a fuel cell stack that is 33 percent more compact than its predecessor with a 60 percent increase in power density compared to the outgoing Honda FCX Clarity. The more compact fuel cell and integrated powertrain, comparable in size to a V-6 engine, now fits entirely under the hood of the car, allowing for a more spacious cabin with seating for five passengers. The Clarity Fuel Cell features a class-leading driving range rating for zero-emission vehicles with its EPA range rating of 366 miles, with a refueling time of approximately three to five minutes.

Honda has led the industry for nearly two decades in the development and deployment of fuel cell vehicle technology through extensive real-world testing and customer deployments, including the world's first government fleet customers and first-ever retail fuel cell vehicle consumer leasing program. Through this effort, Honda has collected valuable feedback concerning real-world use of both fuel cell vehicles and public hydrogen refueling stations.

Since the introduction of its first-generation fuel cell vehicle, the FCX, in 2002, Honda has made significant technological advancements in fuel cell vehicle operation in both hot and sub-freezing weather while meeting customer expectations and safety regulations.

Honda's second-generation fuel cell vehicle, the FCX Clarity, launched in July 2008 and was quickly heralded as a technological breakthrough in the areas of design, packaging and efficiency. As the world's first dedicated platform fuel cell vehicle, the FCX Clarity was powered by the smaller and lighter Honda V-flow fuel cell stack positioned in the center tunnel of the vehicle, with the smooth high torque front-wheel drive electric motor, providing performance on par with a gasoline powered sedan, including a 240 miles driving range rating.

Honda has deployed fuel cell vehicles in the U.S., Germany and Japan, including the FCX Clarity, which was named the 2009 World Green Car.

Honda Commitment to the Environment

Based on its vision of "Blue Skies for our Children," Honda is working to advance technologies that address society's environmental and energy concerns. Honda is targeting a 50 percent reduction in its total company CO2 emissions on a global basis by 2050, compared to 2000 levels.  Starting in 2016, Honda will begin introduction of a new generation of the Honda Clarity series of vehicles, with the hydrogen-powered Clarity Fuel Cell vehicle, followed by a new Clarity Electric and Clarity Plug-In Hybrid in 2017, as the company strives to realize significant growth in sales of electrified vehicles.