Hyundai’s first 200-mile electric vehicle will be a crossover 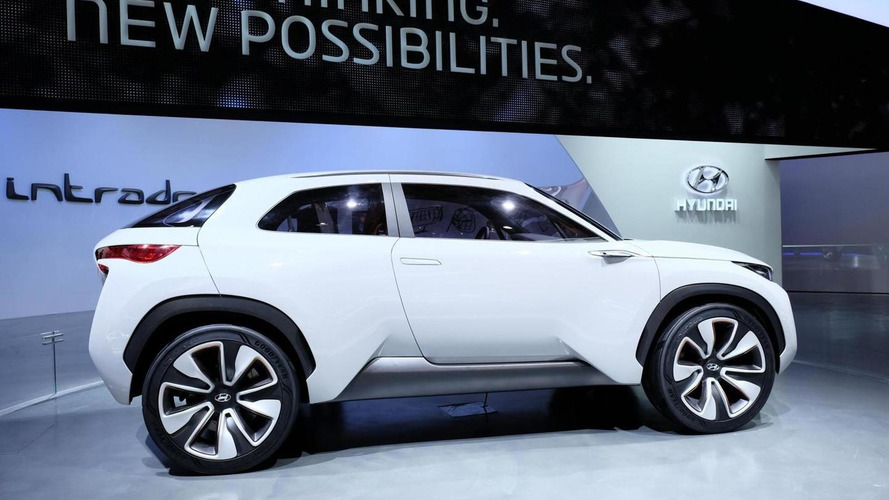 When Hyundai launches its first 200-mile electric vehicle, it will be a crossover. Hyundai vice president of corporate and product planning Mike O’Brien told Motor Trend that the 200-mile EV would not be based on an existing model.

Hyundai said last week that its new Ioniq Electric will be able to drive about 124 miles on a fully charged battery. But engineers said that the car’s battery will be air-cooled, and that liquid cooling would be necessary for longer driving ranges. The company said it would launch a 200-mile EV by 2018, which is probably the timing we could expect for this EV crossover. The Ioniq Electric goes on sale in the U.S. before the end of this year. Hyundai says that by 2020, it will offer an electric car with 250 miles of range.

We haven’t yet seen any indications of what an electric Hyundai crossover might look like, though the Intrado concept shown at the 2014 Geneva Auto Show (and pictured here) had a fuel-cell powertrain and might hint at a future alternative-fuel model. Hyundai already sells a version of its Tucson crossover with a fuel-cell powertrain.

Hyundai also revealed at the Los Angeles Auto Show a subscription-based model for purchasing the Ioniq Electric. Available in California starting in 2017, the “Ioniq Unlimited” scheme would let customers pay for the car payment, maintenance, charging costs, and other ownership fees all in one lump sum. It’s unclear whether that model might be offered for the company’s next electric car.

“This new ownership experience adds to the satisfaction of driving a no-compromise, clean vehicle with unlimited mileage and zero hidden costs,” Hyundai vice president of marketing Dean Evans said in a statement. “It was time to make clean vehicle ownership easy for everyone.”