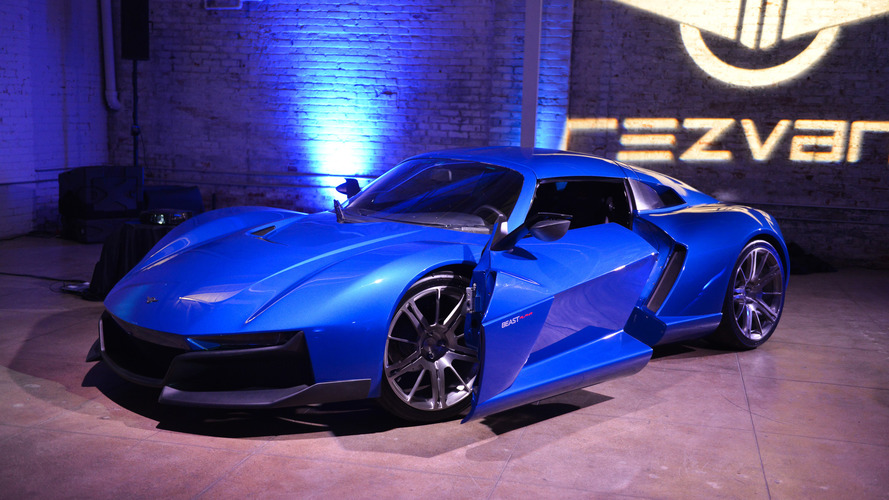 After a ton of teasing, Rezvani is finally officially opening up the 2017 Beast Alpha’s forward-sliding Sidewinder doors for a full reveal of the brand’s new, somewhat more luxurious supercar. This animal isn’t a boulevard cruiser, though. With 500 horsepower on tap from a turbocharged Honda K24 2.4-liter four-cylinder, the roadster can still leap to 60 miles per hour (97 kilometers per hour) in 3.2 seconds when equipped with the optional sequential automatic gearbox and a top speed of 175 mph (282 kph). The standard six-speed manual requires just a blink of an eye longer to get there in 3.5 seconds.

The Alpha has a strong resemblance to the regular Beast, especially at the front end. However, the new model features an A-pillar that leads to a removable hardtop roof panel that lets occupants enjoy open-air motoring or have some protection from the elements. The change makes the twin nacelles at the rear a little less prominent in the updated design.

Inside, occupants find a high-end mix of leather and Alcantara in the cabin. Unlike the regular Beast, there are also amenities like an airbag, power windows, air conditioning, and a connection for Apple CarPlay and Android Auto.

The 2017 Beast Alpha starts at $200,000, and Rezvani is already taking orders for them. The company works with each customer on an individual basis to tailor the car. Buyers can also spec options for adjustable power settings, improved handling, and traction control, if they want a little more performance from the bespoke roadster.

A formidable addition to the Rezvani lineup, the Beast Alpha makes its world debut in Los
Angeles, California, and builds on the success laid out by the open-top, 500-horsepower Beast
that was unveiled in 2015. Designed to provide the ultimate, unfiltered driving experience, the
Beast Alpha introduces more features and more performance than ever before.

“We’ve upped the ante with the new Beast Alpha,” said CEO Ferris Rezvani. “After the success
of the Beast, we knew that customers wanted even more. Designed to stir emotions, the Beast
Alpha is that car… and then some, delivering a pure driving experience unparalleled in the
market."

Distinctive Design, Inside and Out
Under the direction of CEO Ferris Rezvani, Samir Sadikhov’s award-winning design style
evolves to include the hard top Beast Alpha, which integrates the aggressive, streamlined
approach used previously on a new, more mainstream vehicle in the Alpha.

New features like a removable targa-style top and patented SideWinder doors are the
centerpiece of the sports car. Up front, an aggressive fascia signifies the Beast Alpha’s on-road
presence and allows air to travel naturally over the body. Side vents provide cooling to the
engine bay, while a signature rear design pairs with a central exhaust port and dual overhead
vents on the rear hatch.

The interior of the Beast Alpha was developed with one thing in mind: the driver. A
performance-focused layout provides an experience unlike any other. Alcantara and leather
fitments provide more comfort while in the cabin, while a sporty steering wheel and a custom
shift knob seamlessly connect the driver to the road. Amenities like air conditioning, airbags,
Apple CarPlay, and Android Auto tame the Beast Alpha, but only slightly.

Pure Performance Characteristics
At its core sits a 500-horsepower racing engine built locally by the Rezvani Motors team.
Engineers start with a base Acura K24 block that is rebuilt from top to bottom specifically for
Beast Alpha. The upgrades include:

Drivers are also able to choose from a range of adjustable power settings that enhance
performance characteristics like throttle response and handling, with the ability to limit or remove
traction control when in a track setting. These settings also allow for alternative eco-friendly fuel
choices.

Pricing
With a starting price of $200,000, the Beast Alpha provides a sports cars experience unlike any
other. Hand built in Irvine, California, by a team of specialists, Rezvani works with customers in
development of each vehicle, allowing buyers to personalize the car, distinguishing it and
themselves from the crowd. The 2017 Rezvani Beast Alpha is now available for order.

About Rezvani Motors
Rezvani Motors was founded in 2014, in Orange County, California, with a mission to create the
purest sports car driving experience on the market. All vehicles are designed and developed in
the United States with suppliers and partners from around the world.