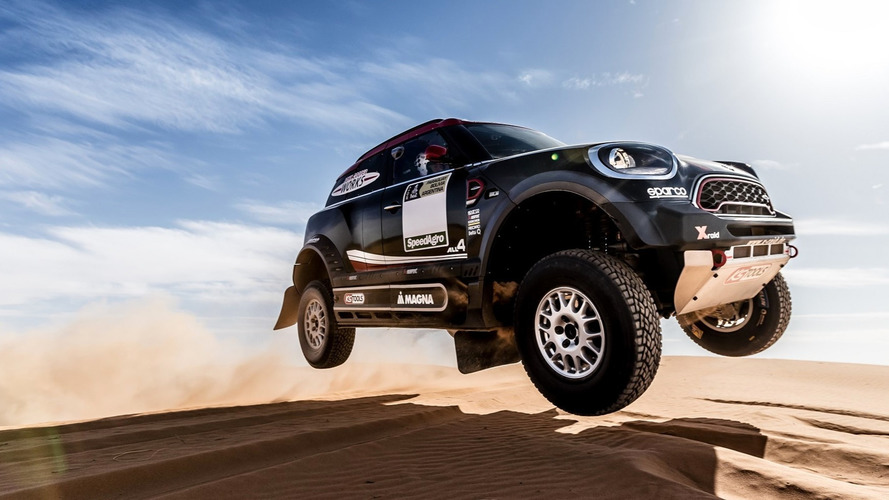 Can the all-new Mini JCW Rally reclaim the Dakar crown from Peugeot?

After four years of total domination, Mini lost its Dakar Rally crown to Peugeot in January. To fight back, Mini and partner X-raid have developed an all-new rally raid machine. And this is it, the Mini John Cooper Works Rally.

It’s loosely based on the all-new Mini Countryman, unveiled yesterday at the Los Angeles Auto Show. The carbon Kevlar bodywork quite closely resembles that of the Countryman and, being more or less the same size, doesn’t look quite as bloated as the old Mini All4 Racing. That looked like a Countryman that been scaled up 30 percent on a Xerox machine. Which it sort of was, actually.

Anyway, the similarities between the Countryman and the JCW Rally begin and end with the styling. Underneath the skin, the Dakar car is totally bespoke.

The power goes through a six-speed sequential gearbox to four-wheel-drive. That’s a little surprising. With its victory, Peugeot proved that two-wheel-drive does work and Toyota has followed their lead for 2017. The regulations allow 2WD cars to run lighter, with more power, and greater suspension travel.

To overcome the penalties - especially its considerable 4,300 pound (1,950 kilogram) bulk - the JCW Rally spent hundreds of hours in the wind tunnel, in an effort to find a bit more top-end speed. Mini quotes a top speed of 114 miles per hour (184 kilometers per hour), but it’s almost certainly quite a lot faster than that.

Attention has been paid to the handling, as well. All three spare wheels are now housed under the chassis, which lowers the center gravity. Suspension is by twin Reiger spring/shock units at each corner.

Mini and X-raid have stuck to what they know with the JCW Rally. But going with 4WD could be a bit of a gamble, when all the signs suggest that 2WD is the way to go. We'll find if the gamble pays off when the Mini JCW Rally fleet, led by Mikko Hirvonen, goes head to head with the updated Peugeot 3008 DKR and all-new Toytota Hilux on the 2017 Dakar Rally, which runs from January 2 to 14.