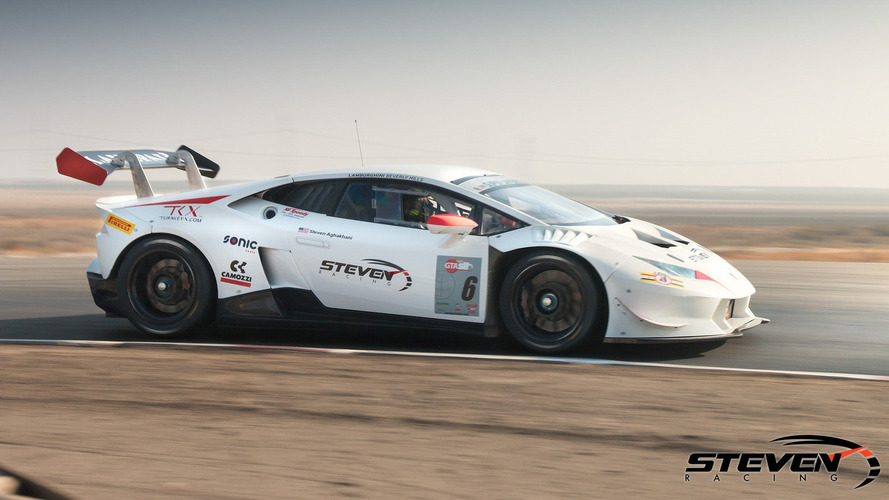 Steven Aghakhani came with in three seconds of winning in his Lamborghini Huracan Super Trofeo.

Steven Aghakhani has gone more than 200 miles per hour (320 kilometers per hour) in a Bugatti Veyron. He is training to take part in the Lamborghini Super Trofeo. He has just won his class in the Global Time Attack event at Burtonwillow Raceway in California. That would be an impressive resume for a 50-year old, but Steven is only 13.

He missed his goal of winning the event overall, but only by three tenths of a second. Mark Jager took victory with a time of 1:41.309 in his massively more powerful Unlimited AWD Subaru STi.

Steven started racing go-karts at the age of seven. He acquitted himself well enough to pick up a place on GT team US RaceTronic’s driver development program with a view to becoming a professional racer. With tuition from drift champion Michael Essa, he has been getting to grips with the Lamborghini Gallardo Super Trofeo machine and latterly the Huracan.

It no doubt helps that Steven’s dad Armik - himself a former racer - is a squillionaire. And very trusting, for it was his Veyron that Steven drove to 202 mph (325 km/h) earlier this year. Rumor has it there’s another one in the garage. Along with a Ford GT. And a McLaren 650S. And a Lamborghini Aventador.

Steven won’t be old enough to contest the Lamborghini Super Trofeo for another few years yet. On his evidence, it looks like he will be more than capable of running at the front when he finally makes the step. He said: “The Huracán is definitely one hell of a race car. There’s a lot that I need to learn about the car. It feels amazing behind the steering wheel.

"The biggest difference between the Huracán and the Gallardo is that the Huracán has so much more grip, downforce, and power. Everything feels much better in the Huracán. Personally, what I think about the car is that it’s so perfect on so many different levels and you can do so much more with this car. I can’t wait to get back in it.”

Keep an eye on him.