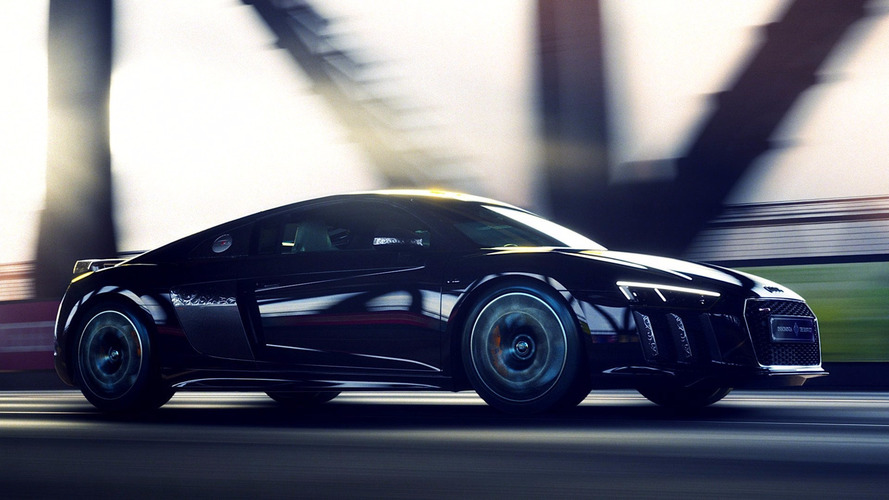 Built for Audi Japan, it's a bit of very expensive product placement for the latest installment in the fantasy juggernaut, Final Fantasy XV.

Audi can already count King Harald of Norway and Princess Diana among its royal patrons, past and present. Now it can add Prince Noctis of the Kingdom of Lucis to that list.

Audi has teamed up with the Royal Art Society of Lucis to create the one-off Star of Lucis R8 as a 20th birthday present to the Prince. It’s finished in a deep, dark shade of Ultrossic Black, mixed with just a hint of purple.

Carbon fiber elements including the front intake strakes, side blades, and rear wing are decorated with the traditional pattern of the Tenebrae oracle clan. The highly intricate wheels represent the symbol of the Kingdom.

The interior is swathed in white and black leather upholstery with orange stitching. Audi’s Virtual Cockpit instrument display and a Bang + Olufsen stereo mean the Prince can stay connected to the Kingdom, while enjoying his favorite tunes.

Here’s a promo for the car.

Gamers may have already realized, but for those that are scratching their heads at this point, we’re in the world of Final Fantasy. Specifically, the latest installment of the fantasy juggernaut, Final Fantasy XV: Kingsglaive. It’s a bit a product placement, the R8 appearing in the trailer, but not the game itself.

The Kingdom of Lucis may not exist, but the one-off R8 Star of Lucis does. Created at the behest of Audi Japan and Final Fantasy developer Square Enix. It’s based on the R8 Plus, with power from a 5.2-liter, naturally aspirated V10 engine that throws out 601 horsepower (448 kilowatts) and 413 pound-feet (560 Newton meters) of torque. Sent via a seven-speed, dual-clutch S-tronic gearbox to Quattro four-wheel-drive, that’s enough to propel the thing from 0 to 62 miles per hour (100 kilometers per hour) in 3.2 seconds, and a top speed of 205 mph (330 km/h).

The R8 Star of Lucis is available to buy, but getting hold of it won’t be easy. The eventual owner will be selected by raffle on November 21, but whoever holds the winning ticket will then have to come up with the asking price. Which is huge. $470,000, no less.