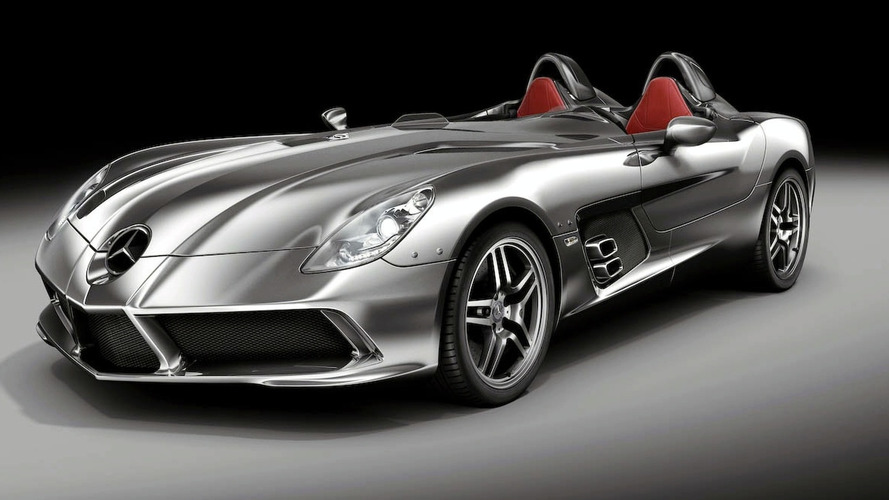 After a few official pictures leaked yesterday, Mercedes decided it was time to officially reveal pictures of the new SLR Stirling Moss.

After a few official pictures leaked yesterday, Mercedes decided it was time to officially reveal the new SLR Stirling Moss. Set to debut at the North American International Auto Show in Detroit, the new version marks the SLR's swan song and the end of McLaren's collaboration with Mercedes on high-end supercars.

Built in honor of the original 1955 Mercedes 300 SLR and its legendary driver Sir Stirling Moss, the new SLR bares a striking resemblance to the classic racer. In order to make the car as historically accurate as possible, Mercedes decided to create the retro-racer without a roof or side windows. The windshield is replaced by two small wind deflectors that measure only a few centimeters in height while at the rear two integrated air scoops serve as roll-over bars.

The interior also receives the racing treatment as many of the traditional luxuries are removed for purity's sake. In spite of this the cockpit is still trimmed with a mix of carbon fiber, aluminum, high-end leather and an aluminum plate that has been engraved with the signature of Sir Stirling Moss.

Power comes from a supercharged V8 engine that produces 650 hp (478 kW) allowing the roadster to run from 0-62 mph (100 km/h) in less than 3.5 seconds and reach a top speed of 217 mph (350 km/h). To help keep the car on the road at these speeds, the exterior has not only been reworked for historical design purposes but also in order to generate more downforce. One of the car's more interesting additions is an airbrake that rises when braking at speeds above 75mph (120 km/h) and can also be operated manually.

Production of the €750,000 SLR Stirling Moss will be limited to 75 units and the company is currently scheduled to begin building them in June 2009, just one month after the SLR roadster ceases production.