Why Hyundai is betting big on its Ioniq hybrids 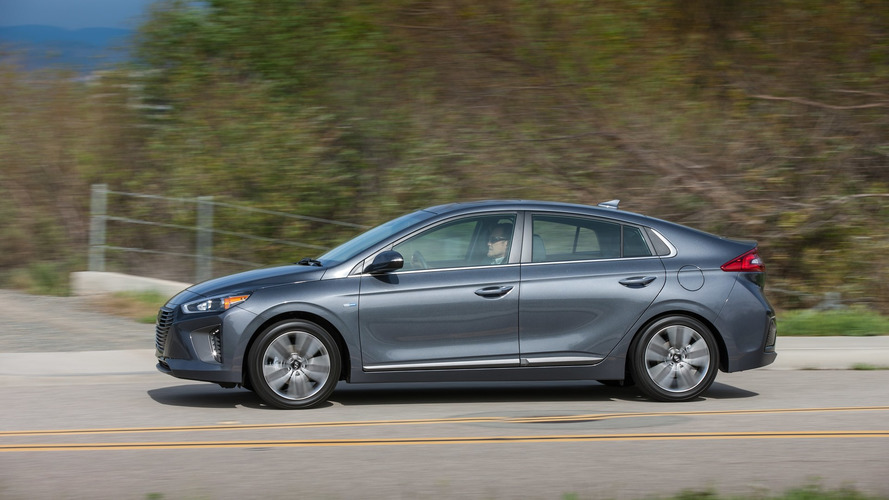 Selling alternative-fuel cars isn’t an easy business right now. Gas prices are cheap, and electrified cars – hybrids, plug-in hybrids, and full-electrics – make up just 2.8 percent of the new-car market, according to Hyundai’s data. That, by the way, has barely changed since 2011’s figure of 2.25 percent. How, then, does Hyundai expect its trio of Ioniq electrified cars to make a splash? Cue the young people.

“Millennials in particular are much more interested in these vehicles than other groups,” says Mike O’Brien, Hyundai’s vice president of corporate and product planning.

Millennial car shoppers – those born since 1978 – say they “definitely would consider” a hybrid, plug-in, electric, or fuel-cell vehicle at higher rates than any other age group. And with the demographic once claimed to hate cars set to buy 40 percent of all new vehicles by 2020, their tastes are a hugely important consideration.

Hyundai will cater to those tastes over the coming months by launching the Ioniq Electric by the end of this year, the Ioniq Hybrid early in 2017, and the Ioniq Plug-in Hybrid by August. The three cars look fairly similar and are all built off the same compact five-door hatchback body, but with variations on their powertrain to suit different types of buyers.

Hyundai believes that alternative-fuel cars are the future of the auto industry, regardless of vehicle segment. It will be the only way to continue to meet increasingly strict fuel-economy targets set by governments both in the U.S. and around the world, O’Brien says. Whereas new cars have typically seen an average efficiency improvement of about one percent per year, he says, tightening laws will force an improvement of more like 4.7 percent annually.

“We have to go roughly at five times the pace of the historical industry average, and the only way to do that is electrification,” he says. “We have no choice, as an industry and as a society.”

For Hyundai, that means a huge number of new vehicles to build on top of the Ioniq family. By 2020, the automaker plans to launch a total of 28 alternative-fuel models: 10 hybrids, 8 plug-in hybrids, 8 full-electrics, and 2 fuel-cell cars.

Hyundai expects that customers will self-stratify among the different powertrain choices depending on their needs. Those with short commutes might be perfectly happy with the Electric and its expected 124-mile driving range. Data shows that shoppers of all ages and demographics are most interested in the Ioniq Hybrid – “That will be the biggest player,” says O’Brien. The plug-in hybrid variant could be the toughest sell of all because some shoppers don’t really understand that they can use gasoline as well as electricity.

“I would argue that plug-in hybrid is the most misunderstood product that we sell… most customers think that the plug-in hybrid won’t go without the plug in the wall,” says O’Brien. “We need to overcome that, do a better job of communicating the merits of plug-in.”

In fact, Hyundai may struggle to communicate the message about its trio of new eco-friendly cars in general. Because the automaker has a relatively small ad budget compared to what, say, Toyota can spend on the Prius Prime, Hyundai will focus its advertising and marketing efforts in ten states, including California and New York, likely to have high plug-in vehicle sales. The Ioniqs will be available for purchase in all 50 states, however.

Electrification, though, isn’t the only other technology Hyundai is considering for saving fuel. Even in the wake of Volkswagen’s widely-publicized scandal, Hyundai isn’t shying away from diesel. The company sells many diesel models overseas but none in the U.S. That said, Hyundai might consider bringing diesel here in the right vehicle; a truck, for instance, seems like a strong possibility.

“We’re looking for the right application where we can have a clear advantage for that powertrain,” says O’Brien. “They’re great for vehicles that have an occasional towing need, vehicles that have had traditionally a very low fuel economy performance.”