Apple AR mapping could turn your windshield into a giant HUD 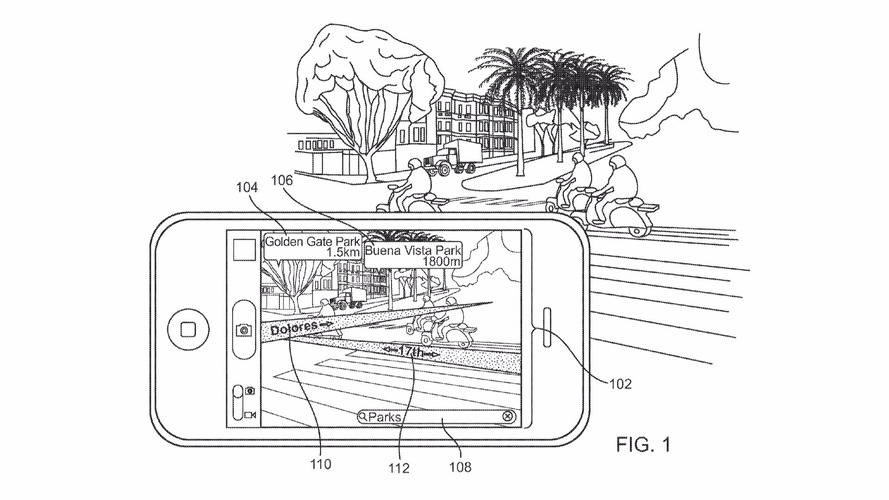 The newly-patented augmented reality tech can superimpose nav and POI info onto an iPhone screen, which could be easily transferred into a car via Apple CarPlay.

Technology giant Apple has been granted a patent for an iPhone-based augmented reality mapping system that could be transferred to cars through Apple CarPlay.

On a mobile device, the system uses the device’s camera to take a live image and superimpose information over the image. At a basic level, street and building names, and points of interest would be highlighted. A more advanced version would use GPS navigation data to display route guidance information complete with direction indicators over a live image of the immediately location.

The system would be easily transferable onto a car’s infotainment system via Apple CarPlay. It could even be used in tandem with a head-up display, potentially turning at least a large section of windshield into an augmented reality screen.

Since 2014, Jaguar Land Rover has been working on a similar technology that it calls “Virtual Windscreen”. It is capable of displaying a whole range of information, depending on the application. It can show basic speed and navigation data, alongside more advanced information like direction indicators on the road surface ahead and pointing out potential hazards. It can even show the racing line and a ghost car when driving on a track, and an image of what is under the car's front end when driving off road.

Apple has arguably lagged behind its competitors in developing augmented and virtual reality technology. Indeed, it has apparently cancelled the ambitious - possibly overambitious - Apple Car project to free up the funds and engineers needed to play catch up.

As CarPlay is already available in plenty of cars, this kind of AR system could give Apple a strong footing in the auto industry at massively less cost than becoming a full-blown automaker. It would also save existing automakers a huge chunk of cash developing their own AR systems.