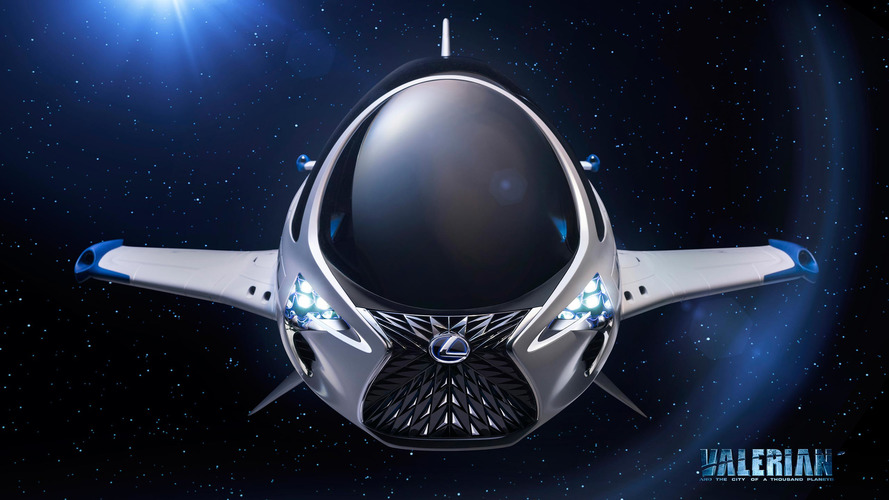 Luc Besson directs the film, which is based on a French comic book. The movie stars Dane DeHaan and Cara Delevingne.

Given the massive changes to the automobile in just the past 50 years, the car could be completely irrelevant by the 28th century. However, Lexus still wants to be on the forefront of transportation design 700 years from now, and the company imagines what that could look like with the Skyjet for the upcoming sci-fi film Valerian and the City of a Thousand Planets.

The Skyjet is a single-seat pursuit spaceship with stubby wings and a bubble-like canopy. The designers incorporate the brand’s spindle grille into the nose of the craft, which doesn’t make too much sense for something flying through space. It also has triangular LED headlights that evoke the upcoming LC500 coupe. Other than the front end, the shape doesn’t really fit with the brand’s current, very angular look.

Directed by Luc Besson (The Professional, The Fifth Element, Lucy), Valerian and the City of a Thousand Planets is an adaptation of the French comic series Valérian. Dane DeHaan and Cara Delevingne play a pair of agents that go to the intergalactic city Alpha on an adventure. The cast also includes Clive Owen, Ethan Hawke, and Rihanna. It’s the highest-budget European motion picture ever produced and arrives in theaters in July 2017.

You can check out the trailer below. There’s a brief glimpse of the Lexus Skyjet at 1:16 just before Rihanna’s appearance in the clip.

We have to wait 700 years to find out if Lexus really builds a spaceship, but the brand has new products on the way in the nearer future. The LC500 arrives early in 2017 as the company’s flagship coupe. The company is also working on a replacement for the LS. Spy shots don’t reveal much about the design yet, but the shape may have cues from last year’s LF-FC concept. The official debut could come in January at the North American International Auto Show in Detroit, and sales would potentially begin by the third quarter.

Gallery: Lexus spaceship Valerian and the City of a Thousand Planets

EuropaCorp and Lexus Unveil 28th Century Spacecraft 'SKYJET in Upcoming Sci-Fi Epic: Valerian and the City of a Thousand Planets

November 10, 2016―Today, Lexus announced the formation of a creative partnership with film studio EuropaCorp. One of the early highlights of this collaboration will be the highly anticipated 2017 science fiction film, Valerian and the City of a Thousand Planets, starring Cara Delevingne and Dane DeHaan. Lexus collaborated with the Valerian creative team, as they imagined and brought to life the vision for the SKYJET, a single-seat pursuit craft featured in the film.

An epic teaser trailer unveiled online today (http://valerianmovie.com) gives fans a long-awaited first look at footage from the film. Viewers will also get a first glimpse of the SKYJET maneuvering through the intergalactic citadel of Alpha.

The Valerian team created the SKYJET with the ambition of featuring a vehicle grounded in reality but befitting of the Valerian world, set 700 years in the future. The creative team met with Lexus' Chief Engineer, Takeaki Kato and the Lexus design team, to discuss incorporating believable, imaginative technologies and contemporary design cues into the final iteration of the SKYJET.

The SKYJET design also incorporates an adapted interpretation of Lexus' signature "spindle" grille, and a similar headlight design to that of the hotly anticipated 2018 Lexus LC coupe, defined by an athletic and aerodynamic shape.

Valerian and the City of a Thousand Planets features an all-star cast including Clive Owen, Ethan Hawke, Rihanna, and Kris Wu. The project marks Luc Besson's most ambitious film to date and the largest-budget European motion picture ever produced. The feature film is an adaptation of the French comic series 'Valérian,' written by Pierre Christin and illustrated by Jean-Claude Mézières. The film is produced by Virginie Besson-Silla.

Commenting on the partnership, director Luc Besson said, "For this partnership we were looking for a brand that's pioneering in innovation and technology, who is focused on the future more than the past."

The brand is set to provide unique fan experiences over the next nine months, designed to bring enthusiasts from around the world closer to the action leading up to the film's release in July 2017.

Commenting on the development of the SKYJET, David Nordstrom, Global Branding Department General Manager at Lexus, added: "As fans of films and Luc's previous work, Lexus is privileged to help bring Luc's dream to life. We enjoyed the challenge of bringing Lexus' design philosophy and technology innovations to this project. We look forward to developing our partnership with EuropaCorp as we strive to give audiences the most amazing experiences imaginable in the coming years."

Valerian (Dane DeHaan) and Laureline (Cara Delevingne) are special operatives for the government of the human territories charged with maintaining order throughout the universe. Under directive from their Commander (Clive Owen), Valerian and Laureline embark on a mission to the breathtaking intergalactic city of Alpha, an ever-expanding metropolis comprised of thousands of different species from all four corners of the universe. Alpha's seventeen million inhabitants have converged over time- uniting their talents, technology and resources for the betterment of all. Unfortunately, not everyone on Alpha shares in these same objectives; in fact, unseen forces are at work, placing our race in great danger.

ABOUT LEXUS
Since its U.S. market debut in 1989, Lexus has earned a worldwide reputation for high-quality products and exemplary customer service. Renowned for the superior reliability of its vehicles, Lexus is the luxury hybrid leader, offering hybrids that combine innovative technology and premier luxury. To date, Lexus has grown into 90+ markets worldwide. The evolution of Lexus is not only reflected in the progressive designs of its latest vehicles, but also in the brand's mission to captivate the next generation of luxury consumers with consciousness, products, and services that are visionary, original and exciting. http://www.lexus-int.com