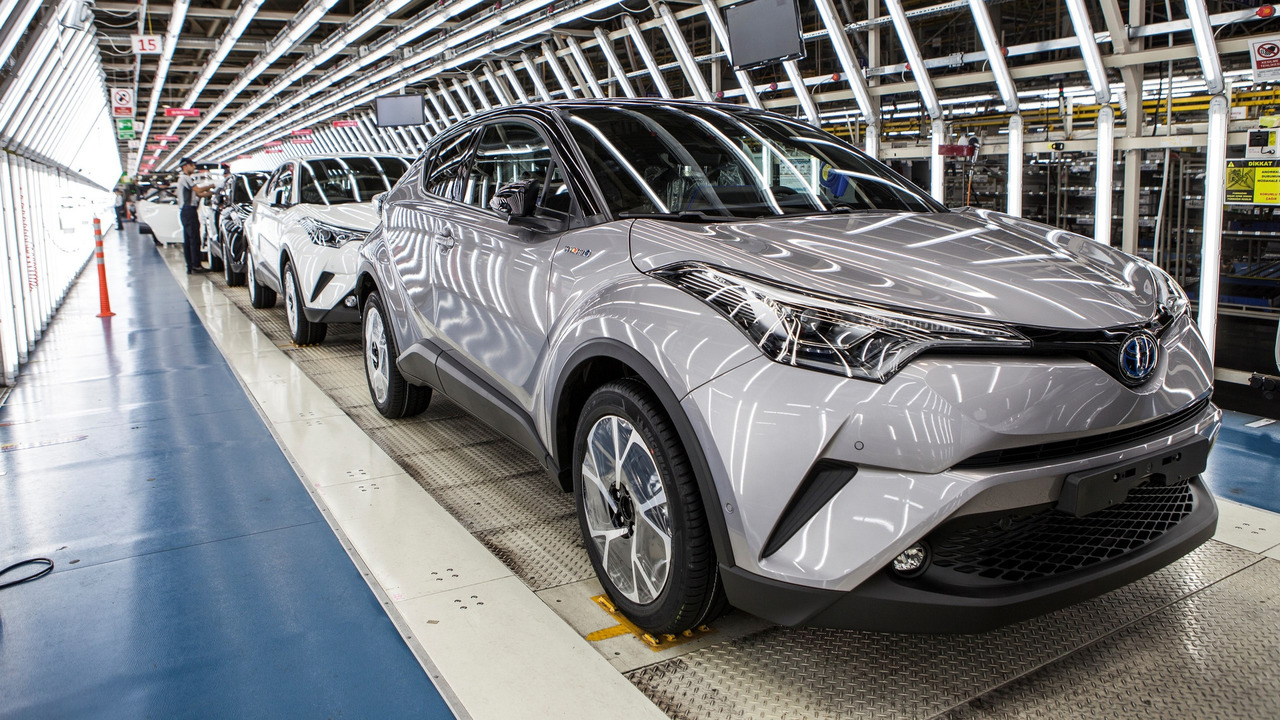 U.S.-spec version to debut later this month at the Los Angeles Auto Show.

If you’re in the market for a subcompact crossover with funky styling but you’re finding the Nissan Juke’s appearance a bit too much, then the new Toyota C-HR might be the solution. Now in production at the Sakarya factory in Turkey where the Verso and Corolla are also being assembled, the new C-HR brings a flamboyant design to the segment and is one of those cars that will certainly stand out on the road.

In order to accommodate the new model’s arrival at Toyota Motor Manufacturing Turkey, the world’s biggest car manufacturer last year has invested approximately €350 million (about $382M) and has hired 2,000 people to get everything ready. By adding a third vehicle to the assembly lines, Toyota is boosting annual production at the Sakarya plant to 280,000 units.

Besides the polarizing exterior design, the C-HR is also the first subcompact crossover to be available with a full hybrid powertrain. The eco-friendly version will be built alongside the conventionally-powered models and will have the hybrid hardware imported from Toyota’s Deeside factory in U.K. We’re talking about a hybridized 1.8-liter gasoline engine with 120 horsepower (90 kilowatts) and 104 pound-feet (142 Newton-meters) of torque channeled to the front wheels through a continuously variable transmission.

Alternatively, the C-HR can be had with a turbocharged 1.2-liter engine borrowed from the Auris with 114 hp (85 kW) and 136 lb-ft (185 Nm). It can work with a six-speed manual sending power to the front axle or with a CVT that can be optionally hooked up to an all-wheel-drive system. In some markets, a naturally-aspirated 2.0-liter gasoline engine with 142 hp (107 kW) and a CVT is going to be available.

Production at the factory in Turkey will cater not only the European markets, but also United States, Canada, South Africa, Taiwan, and Mauritius. The U.S.-spec model will be revealed next week at the Los Angeles Auto Show and will go on sale next spring.

Toyota has officially launched production of the new C-HR, a model that promises a radical injection of style, handling and driving pleasure into the medium-size crossover market.

C-HR also signals a further strengthening of Toyota’s European and British manufacturing operations, being built in Turkey with hybrid engines supplied by the company’s Deeside engine plant in North Wales and transmissions from Poland. Toyota has invested an additional £7.1 million in Toyota Manufacturing UK’s operations to bring the hybrid engine into production.

C-HR’s dynamic quality is rooted in its use of a Toyota New Global Architecture-based platform, securing fundamental advantages such as a low centre of gravity and a highly rigid body construction. The model is the first outside Japan to be manufactured using TNGA, which is a central element in Toyota’s commitment to build ever-better cars

Speaking at the line-off ceremony today at Toyota Motor Manufacturing Turkey’s Sakarya factory, Dr Johan van Zyl, President and CEO Toyota Motor Europe, said: “The Toyota C-HR is a hugely important product for the whole of Toyota. The crossover segment is growing fast and this is our very strong entry into the segment.”

C-HR is unique in its part of the market by offering customers the choice of a smooth and efficient hybrid powertrain and it joins the British-built Auris and the French manufactured Yaris as Toyota’s third European-manufactured hybrid vehicle. The importance of this was emphasised by Moritaka Yoshida, President of Toyota Motor Corporation’s mid-size vehicle company: “Hybrid defines Toyota. Since the first Prius in 1997 we have steadily convinced more and more customers around the world that hybrid vehicles are one of the best solutions to today’s environmental issues. We have now sold more than 9.5 million hybrids globally,” he said.

The introduction of C-HR will increase annual production capacity at Toyota Motor Manufacturing Turkey to 280,000 vehicles, including the established Corolla and Verso models built there. Toyota has invested around €350 million (approx. £312.5 million) in the plant for the new model, taking total investment in TMMT to €1.7 billion (approx. £1.5 billion) since the start of operations in 1994. The workforce has been increased by an additional 2,000 people to accommodate C-HR.

C-HR is available to order in the UK now, with first deliveries to customers from January.

He said: “It is a great privilege for us to export to North America, because it’s Toyota’s biggest market and our customers there expect a lot from Toyota in terms of quality, customer satisfaction and connection to the brand. TMMT has been one of our best plants globally when it comes to build quality and I am very confident our members there will exceed our North American customers’ expectations.”

The Toyota C-HR is the fruit of collaboration between several European Toyota production sites and supplier businesses.

In addition to 1.8-litre hybrid engines from TMUK in Deeside (see above), C-HR is using manual transmissions from Toyota Motor Manufacturing Poland, featured in the 1.2T turbocharged petrol version. TMMP will also start production of a hybrid transaxle for C-HR from 2018; currently this component is manufactured in Japan.

European suppliers account for most of the individual parts sourced to make C-HR: of the 135 total, 134 of these businesses are based in Europe. With the addition of C-HR to its line-up of vehicles produced in Europe, the ratio of locally produced Toyotas sold in Europe will surpass 75 per cent on a full production year basis.