2017 Opel Insignia has twice as many LEDs as the Astra 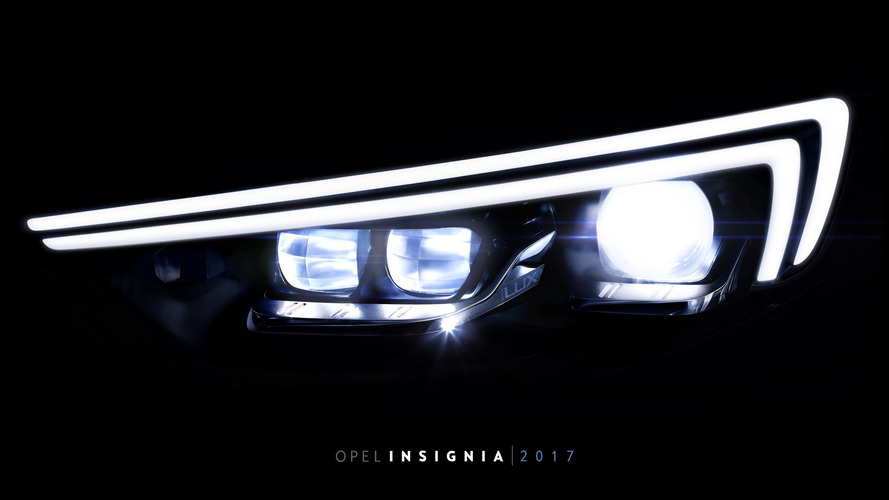 Opel’s IntelliLux LED headlights made their debut in a production car last year on the Astra K with eight diodes on each side. That number will be doubled in 2017 when the second-generation Insignia will come out with optional matrix LED headlights featuring a total of 32 diodes. As it’s the case with the Astra, the LED elements will automatically adapt the distribution and range of the light beam depending on traffic conditions without dazzling the other traffic participants.

Originally introduced more than three years ago in the stunning Monza concept, the adaptive headlights in this latest iteration have a more powerful high beam illuminating the road up ahead for up to 400 meters (1,312 feet). The matrix headlights are also cleverer than before when the high beam is on, with the light intensity at the inner segment rising based on the steering angle as a way to boost visibility while cornering.

As a refresher, the all-new Insignia Grand Sport will be sold depending on region with four different badges: Opel, Vauxhall, Buick (Regal), and Holden (Commodore). It will debut as an Opel/Vauxhall in March 2017 at the Geneva Motor Show, but an online reveal is expected to occur before the year’s end.

A considerable weight loss of up to 175 kilograms (385 pounds) has been achieved as a result of switching to new underpinnings, even though the Insignia Grand Sport is going to be 55 mm (2.1 inches) longer than the outgoing model.

The Euro version will get a new turbocharged 1.5-liter unit with 163 horsepower (121 kilowatts) and 184 pound-feet (249 Newton-meters) of torque delivered to the front wheels via a six-speed manual gearbox. A beefier turbo 2.0-liter with 247 hp (184 kW) is also on the agenda with AWD and an eight-speed automatic transmission. The bread and butter of the range will obviously be the diesels, and there are rumors of a beefier unit with two turbos.

Following the Insignia Grand Sport’s market launch in 2017, Opel will introduce several months later the more practical wagon version, which is expected to hit stateside as well. A range-topping OPC will join the lineup probably at some point in 2019.

Rüsselsheim.  Opel will launch the next-generation of IntelliLux LED® lighting with the all-new Insignia in 2017. In addition to the numerous benefits of the award-winning matrix technology introduced for the first time last year on the Astra, the even more refined and sophisticated IntelliLux LED® headlights of the new Insignia feature additional functions that further improve nighttime visibility.

When Opel revealed the visionary Monza Concept at the 2013 IAA and CEO Dr. Karl-Thomas Neumann announced it showed what could be expected of Opel cars in the future, the company’s exterior lighting experts were not only enthusiastic.

They were just putting the finishes touches to the (in the meantime award-winning) adaptive IntelliLux LED®matrix headlights of the new Opel Astra, which consist of 16 LED segments – eight on each side of the vehicle – that automatically and constantly adapt the range and distribution of the light beam to every traffic situation.

As they admired the show-stopping Monza Concept, Opel’s lighting experts also wondered just how they were going to fit their innovative matrix lighting technology for the next generation Insignia into such ultra-slim headlamps.

Tailwind for Opel’s lighting experts and to the advantage of future customers of the new Insignia: LED development proceeds as fast-as-light. During the Astra’s development, LEDs had become even more compact and powerful, and Opel’s engineers used the significantly higher performance to accommodate twice as many LED segments (32) in the new Insignia’s Monza Concept-inspired headlights as in the Astra.

As a result of the smoother transitions between the higher number of LED segments, the light patterns can be more precisely adapted. The adaptive IntelliLux LED® matrix headlights of the new Insignia therefore produce a larger amount of even brighter light.

“From the Astra we know how much customers appreciate the benefits of IntelliLux LED® matrix headlights” says Ingolf Schneider, Engineering Group Manager Exterior Lighting. “Now we are bringing the even more advanced second generation of this innovative technology onto the market in the all-new Insignia, with additional new functions that further improve visibility at night.”

To improve visibility still further while driving through curves on full high beam, the engineers added a new function to the new Insignia’s IntelliLux LED® matrix headlights. The light intensity at the inner matrix segments rises according to steering angle in order to increase the illumination of the curve.

Despite the futuristic DNA from the visionary Monza Concept, the adaptive IntelliLux LED® matrix headlights of the new Opel Insignia could not be simpler to operate: As soon as the car exits urban areas, the IntelliLux LED®headlights switch themselves on automatically and then constantly adapt the range and distribution of the light beam to every traffic situation, whether driving in town, on country roads, on the motorway, making a turn or taking a curve. Literally turning night into day for the new Opel Insignia – but without dazzling other road users.