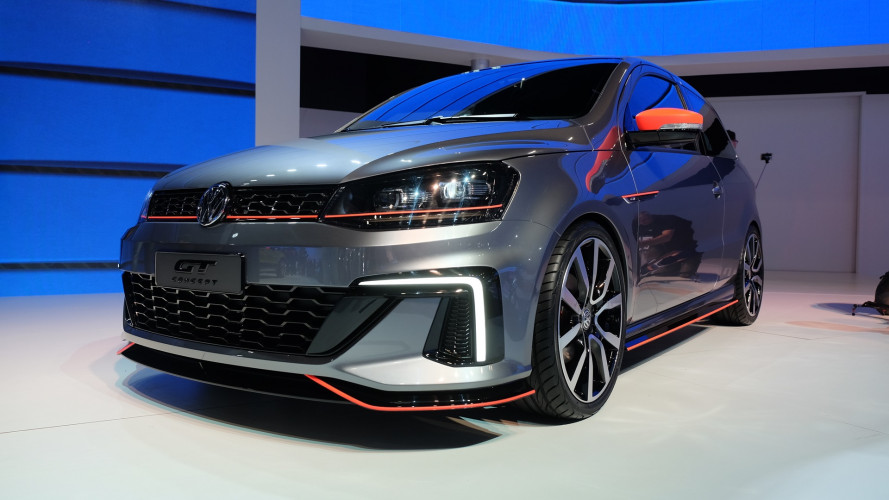 Based on the facelifted third-generation Gol, the GT concept proposes a beefy body kit with enlarged air vents and a set of big 18-inch alloy wheels lending the three-door hatchback an aggressive exterior appearance. The feisty subcompact model has received a Gray Volcano finish contrasted by red accents in the same vein as VW’s crop of GTI-badged models.

Being only a show car, VW Brazil was given the freedom to make the Gol GT stand out and that’s why it has received a pair of full-LED headlights, a faux rear diffuser, dual exhaust tips, and a prominent roof-mounted spoiler. Overall, it looks like a conceptual version of a Polo GTI with some “GT” stickers on the sides and on the rear glass as a nod to the original Gol GT launched in 1984.

The sporty touches continue on the inside where the predominantly black cabin has received a series of red accents also noticeable on the new body-hugging seats. There’s a flat-bottomed steering wheel adorned with the “GT” logo, while the horizontal trim on the air vents harkens back to the first Gol GT.

VW Brazil has not released any technical details, but we do notice the concept is fitted with a five-speed manual gearbox. If a production version is on the agenda, a viable candidate to power the Gol GT would have to be the turbocharged 1.0-liter three-cylinder gasoline engine, which in the entry-level Golf has 115 horsepower (85 kilowatts) and 147 pound-feet (200 Newton-meters) of torque for a sprint to 62 mph (100 kph) in 9.7 seconds onto a top speed of 127 mph (204 kph).

With the Gol being considerably smaller and lighter, the 1.0 TSI should do just fine in a potential GT version, one that would turn out to be a no-frills sporty-ish hatch at an accessible price.