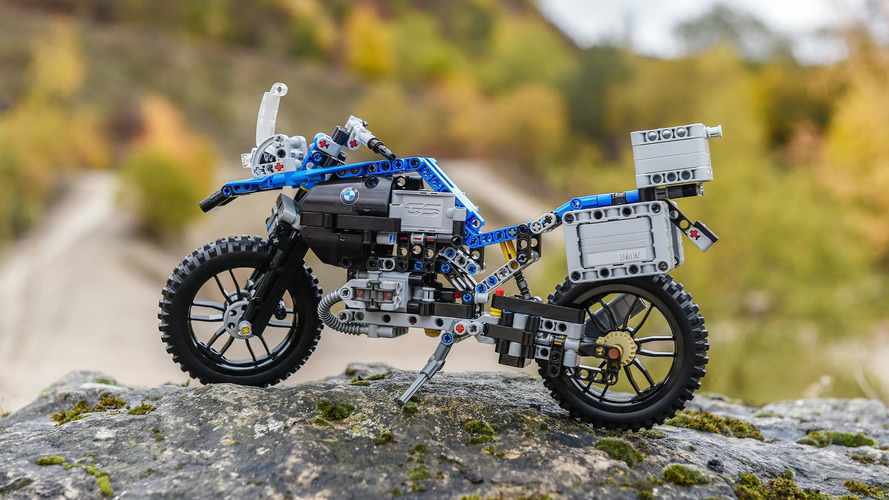 The bike features a slew of working parts, including the off-road-oriented suspension.

Lego already offers several impressive automotive kits of vehicles like the Porsche 911 GT3 RS, Volkswagen Beetle, and Caterham 620R, but the toy brick specialists are now moving to the two-wheeled world with a great-looking new kit of the BMW R 1200 GS Adventure. The set marks the first time that the company’s Technic line is partnering with a motorcycle maker.

The Technic kits have a more skeletal look than Lego’s traditionally blocky shapes, and the more exposed style lets people get a good view of the R 1200 GS Adventure’s mechanical parts. The finished model features a working suspension, shaft drive, and an adjustable windscreen. BMW’s two-cylinder boxer engine even moves. The completed bike appears ready for a trek through the rough terrain in your backyard.

At 603 parts, the R 1200 GS Adventure is fairly simple in comparison to Lego’s automotive kits. For example, the 911 GT3 RS has a massive 2,704 pieces and even the recent Caterham has 770 bricks to assemble. The BMW is decently sized when complete, though. It measures 7.1 inches tall (18 centimeters), 13 inches long (33 cm), and 3.9 inches wide (10 cm). If you need extra help putting it together, Lego’s app offers 3D assembly instructions.

Unfortunately, the BMW R 1200 GS Adventure Lego Technic kit will just miss a launch in time for the holidays and will go on sale January 1, 2017. At least you’ll be able to ring in the New Year by building an impressive model. Lego hasn’t announced pricing for the set yet, but Motor1 reached out to the company for more information.

After the success of the licensed automotive kits, it’s fascinating to see Lego branch out to motorcycles. There are many more bikes that would make great models, too. We can imagine the latest MotoGP machines could look fantastic as Technic sets. Or the company could stick with the BMW partnership and release some of the German firm’s classic cycles.

Munich. A detailed model of the BMW R 1200 GS Adventure developed by
BMW Motorrad and LEGO Technic goes on sale from 01 January 2017. The
BMW Motorrad best-seller will now find its way into the homes of motorcycling
enthusiasts of all ages. The model set – consisting of 603 parts – is the product
of close collaboration between the LEGO Technic and BMW Motorrad design
teams. Combining innovative design with the art of engineering, it is the first ever
LEGO Technic model to be produced in cooperation with a motorcycle
manufacturer.

“BMW Motorrad is very pleased to be able to share the enthusiasm for this bike
with the LEGO Technic community. Two companies came together, both of
them with a longstanding tradition to make emotional products for their
customers”, says Heiner Faust, Head of Sales and Marketing of BMW Motorrad.
Authentic reproduction featuring numerous of details

The LEGO Technic BMW R 1200 GS Adventure is designed to be as faithful as
possible. The characteristic lines of the motorcycle – the so-called flyline –
moving handlebars and even an adjustable windshield recreate the original in
miniature along with numerous technical details. Enthusiasts will recognise the
authentic BMW Telelever front wheel suspension and the shaft drive as well as
the moving BMW Motorrad 2-cylinder boxer engine, which are set in motion as
soon as the motorcycle is moved. Even the black spoke wheels with studded
tyres resemble those of the model's real counterpart. Thanks to the many
details, the set is not only realistic but also fun and challenging to build.
“The proportions of the R 1200 GS Adventure have been recreated
outstandingly well in the LEGO Technic model. We are excited to see how
LEGO Design has reproduced so many visual and technical details of the R
1200 GS Adventure. The close and creative cooperation between the two
design teams was particularly impressive – it went beyond a conventional
licensing agreement”, says Alexander Buckan, Head of BMW Motorrad Vehicle
Design.

The model is 18 cm high, 33 cm long and 10 cm wide, and an interactive LEGO
app is available for the set that features 3D assembly instructions. The LEGO
Technic BMW R 1200 GS Adventure also has a surprise in store for collectors:
the LEGO Group celebrates 40 years of LEGO Technic next year and to mark
the occasion, the kit will contain a specially designed LEGO Technic piece.

The BMW Group
With its three brands BMW, MINI and Rolls-Royce, the BMW Group is the world’s leading premium
manufacturer of automobiles and motorcycles and also provides premium financial and mobility
services. As a global company, the BMW Group operates 31 production and assembly facilities in
14 countries and has a global sales network in more than 140 countries.
In 2015, the BMW Group sold approximately 2.247 million cars and 137,000 motorcycles
worldwide. The profit before tax for the financial year was approximately € 9.22 billion on revenues
amounting to € 92.18 billion. As of 31 December 2015, the BMW Group had a workforce of
122,244 employees.
The success of the BMW Group has always been based on long-term thinking and responsible
action. The company has therefore established ecological and social sustainability throughout the
value chain, comprehensive product responsibility and a clear commitment to conserving
resources as an integral part of its strategy.