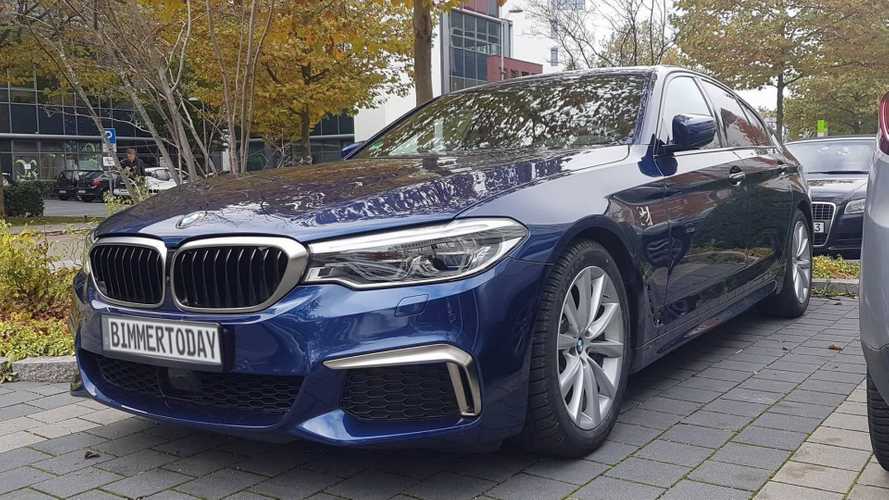 The temporary top dog in the 5 Series G30 family has been caught in Munich as a pre-production vehicle.

If you can’t patiently wait for the mighty M5, then the next best thing is this: the new M550i xDrive. Spotted in a parking lot in Germany’s third largest city, the sporty sedan was exhibiting its evolutionary design that might prompt some people to say it’s a facelift for the F10 rather than a next-gen model.

While looks are subjective, there’s no denying in the fact the new all-paw M550i is an absolute rocket even though it doesn’t have the full-blown M treatment. It sprints to 62 mph (100 kph) in four seconds flat, so it’s actually quicker than the standard RWD-only M5 that needs an extra four tenths of a second. The only M5s capable of outrunning it in the sprint are the 30 Jahre and Competition Edition models that can complete the task in 3.9 seconds.

But as you would imagine, performance and luxury come at a steep price, €82,700 in this case. That’s how much BMW is asking at home in Germany for its temporary 5 Series range topper. Not like it matters a lot for people in the market for a high-performance sedan, but the M550i xDrive with its meaty biturbo 4.4-liter V8 engine will consume only 8.9 liters / 100 km, albeit that figure is based on the very optimistic New European Driving Cycle (NEDC).

Should you care more about efficiency than performance, the plug-in hybrid 530e or the thrifty diesel-powered 520d SE Efficient Dynamics Edition will be a better choice. The latter is also a lot cheaper, carrying a starting price in its domestic market of €47,750.

If you would rather wait for the crown jewel of the range, the new automatic-only M5 should be out by the end of next year with more than 600 horsepower and a first-ever optional xDrive setup.

Additional live images are available at the source link below.