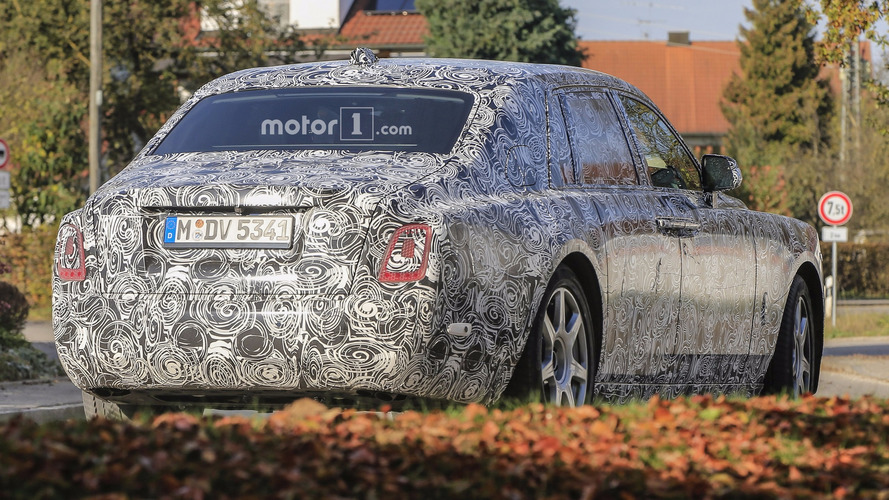 The slightly sloped roofline gives the new Phantom VIII a more dynamic appearance while retaining the supreme elegance of its predecessors.

Caught on camera for a second time in a matter of days, the all-new Phantom had problems hiding its stately body even though the prototype was dipped in a psychedelic wrap in a failed attempt to obscure the sedan’s opulence. The first impression is Rolls-Royce’s designers are only making very subtle changes, but look closer and you’ll notice the grille is even more prominent than before and the LED headlights have been reshaped and appear to be a tad larger.

The side profile has also been subjected to a few changes, with a redesigned C-pillar lending the Phantom VIII a more sloped roofline. In addition, the mirrors have been mounted closer to the A-pillar, and we are also expecting a stretched wheelbase. The test vehicle spotted roaming on the streets of Germany was the standard model, but obviously there’s also going to be a LWB model with rear legroom second to none.

Moving at the back, the taillights remain partially covered underneath the disguise, but even so we can observe the clusters are now sitting more upright. The inner section of the taillight appears to be painted in the same color as the body, much like in the facelifted Fiat 500, but the red central area and the dots above and below it suggest otherwise.

While the changes on the outside are not significant, it’s an entirely different story on the inside where the 2018 Phantom will get a more modern look courtesy of a redesigned dashboard hosting two massive digital screens. Prototype spotted so far had an unfinished cabin, with only the S-Class-like dual screen layout visible, but we expect the production-ready version to have a multitude of other changes to make the new generation even more luxurious than the outgoing Phantom VII.

And while the discreet modifications on the outside might tempt you to believe it will be nothing more than a facelift of the current model, in reality it’s actually going to be an all-new car. Rolls-Royce is working on a lightweight aluminum platform set to underpin not just the next Phantom, but also the Cullinan SUV and all of the other future models.

In the case of the Phantom, it will enable a massive weight loss and there also might be a hybrid later on to further boost the car’s efficiency. The Phantom-based 102EX prototype unveiled at the 2011 Geneva Motor Show was a sign of an electrified future for the Phantom, and while the new model won’t likely spawn a pure EV version, it should receive a plug-in hybrid derivative.

Expect the Phantom VIII to be introduced in the second half of 2017 and go on sale before the year’s end or early 2018. With the Wraith and Dawn now part of RR’s lineup, the Phantom Coupe and Drophead Coupe will not get a new generation.