A trailer carrying three lightly camouflaged prototypes of the new Mercedes E-Class Coupe has been caught on camera.

Sources close to Mercedes-Benz cited by Autocar have revealed the all-new E-Class Coupe will bow in January at the 2017 North American International Auto Show in Detroit. The report seems to be valid judging by the light camouflage applied on these prototypes, suggesting an official reveal is right around the corner. It’s our best look so far at the next-generation midsize coupe, one that will eschew the hardware derived from a previous-gen stretched C-Class in order to make the switch to new underpinnings shared with the E-Class Sedan and Estate.

As far as the design is concerned, these latest spy images perfectly illustrate the matryoshka doll theme going on at Mercedes right now, with the 2017 E-Class Coupe looking pretty much like a larger C-Class Coupe or a smaller S-Class Coupe. It’s still going to be a gorgeous midsize coupe with an elegant body, but the very familiar styling might disappoint some people that would have wanted more variety among the three models. 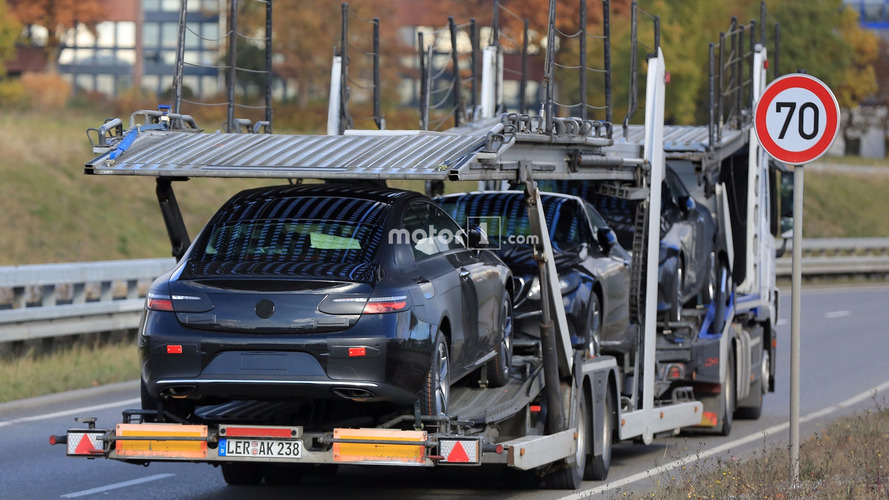 The engines are going to be sourced from the other two members of the E-Class family, including a biturbo 3.0-liter V6 with 396 horsepower and 384 pound-feet of torque in the warm E43. The cream of the crop will obviously be the Mercedes-AMG E63 Coupe with a meaty biturbo 4.0-liter V8 pushing out as much as 603 hp and 627 lb-ft in the range-topping S version.

In regards to the return of inline-six engines, the company with the three-pointed star logo has finally confirmed the spicy rumors, but these are going to debut next year on the facelifted S-Class. It means lesser models will have to wait to receive the new family of silky smooth engines. The decision makes sense taking into account the S is after all the flagship in Mercedes' extensive range.

Following its introduction in a little over two months at NAIAS, the new Mercedes E-Class Coupe will go on sale shortly thereafter. It will be followed several months later by the convertible, which will also spawn more powerful E43 and E63 versions. Until then, the high-powered E63 Sedan will be shown to the public for the first time later this month in Los Angeles.