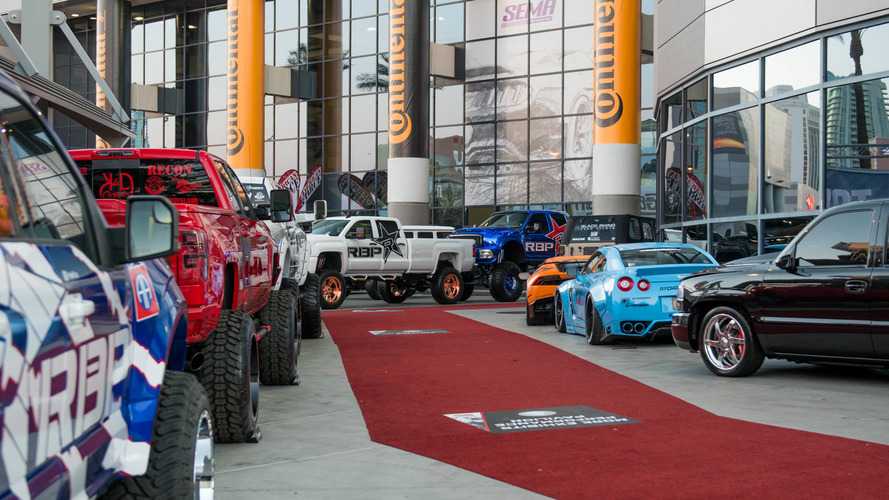 If the court finds that these companies really produce counterfeit parts, then SEMA would ban them from attending again.

UPDATE: Omix-ADA has released a statement about the U.S. Marshals search and seizure of allegedly patent-infringing parts at the SEMA and AAPEX shows. It also thanks the events' organizers for their assistance. The full announcement is in the Press Release section below.

The SEMA Show is a celebration of the best that the automotive aftermarket offers, but several parts companies from China probably aren’t partying after a visit from the U.S. Marshals for allegedly selling knock-off parts. A Nevada judge placed an injunction against Changzhou Jiulong Auto Lamps Factory, Guangzhou Vcan Electronic Technology, Maxgrand Ltd, Sanmak Lighting, Shenzen Unisun Technology, and Unity 4wd Accessories for alleged copyright infringement. The authorities shut down their booths at SEMA and at the Automotive Aftermarket Products Expoin Las Vegas. Law enforcement also seized components from them.

Jeep aftermarket specialists Omix-ADA brought the complaint after finding four of the companies had allegedly copied its design for an auxiliary light mount assembly, and three other firms purportedly took the design for a replacement grille. One business also allegedly duplicated Omix-ADA’s patented hood latch. In addition, there was a dispute over the use of the term Rugged Ridge, for which Omix-ADA holds the trademark.

Henk Van Dongen, Omix-ADA’s Director of Marketing, told the Jeep-focused store and blog Quadratec that the aftermarket company worked with SEMA about the best way to pursue the claim. “SEMA has always said that if something like this happens, then the companies found to be on the wrong side – so to speak – are no longer allowed to come back to the SEMA show,” he said.

The court will now copy all of the evidence and will then give it back to the Chinese firms. According to Automotive News, there will be a preliminary court hearing about the matter on November 10. Omix-ADA will continue taking legal action against the companies. “We’re going to be vigilant going forward,” Van Dongen told Quadratec.

The auto industry has been working to fight against counterfeit parts, but it has remained a serious issue. For example, authorities busted a group in Moscow earlier this year for producing motor oil and putting it in containers from companies like Ford, Mazda, and Toyota. There was also a case in 2014 where Aston Martin recalled nearly 17,600 vehicles because a Chinese sub-supplier was using counterfeit plastic for multiple components.

On Tuesday, November 2, the US Marshal’s office conducted a search and seizure of a variety of automotive aftermarket products as part of US District Court, Civil Complaint number 2:16-cv-02527-APG-CWH, due to claimed infringements of Omix-ADA®‘s patents and trademarks on products sold under the Rugged Ridge® brand. Based upon showing that it was likely to succeed on the merits of its claims for patent and trademark infringement, the district court granted Omix-ADA a restraining order against the certain parts suppliers that led to the search and seizure.

The seizures took place at the Specialty Equipment Market Association (SEMA) show and Automotive Aftermarket Products Expo(AAPEX), taking place this week in Las Vegas. Omix-ADA worked hand-in-hand with show management teams to follow clear guidelines designed to help combat infringing product at the show, which was enhanced with the court order. Counterfeit product and copyright infringement is in direct violation of SEMA and AAPEX policies and the managing parties have taken appropriate action to remove violating exhibitors from the premises.

As a dedicated exhibitor, Omix-ADA would like to thank SEMA and AAPEX management for their help and cooperation in working with the company to help protect its patent and trademark rights, as well as the aftermarket customers. Omix-ADA is also pursuing litigation with several companies selling infringing product at various online retailers.