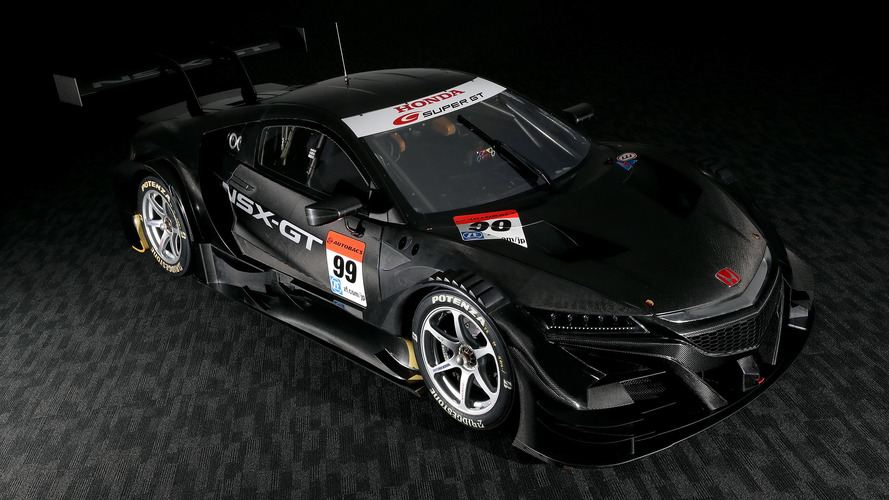 The aggressive race car takes on Lexus' new LC500 in the series and Nissan's updated GT-R.

Acura will have two variants of the NSX on circuits around the world next year. Most spectators will see the NSX GT3 in series like the IMSA Weathertech SportsCar Championship and Pirelli World Challenge, but a wilder looking version will also take part in Japan’s Super GT Series. We won’t know until the competition’s start whether the coupe will be a race winner, but it will certainly be one of the more attractive vehicles on the track.

The NSX-GT has an ultra-exaggerated version of the standard coupe’s sleek design. The GT3 version already looks pretty mean, but the competition example for Japan turns things up a few more notches. A massive front splitter sticks out in front, and it flows to wider front fenders with louvers over the wheels. Big side sills attach to bigger hips in the back, and diffuser dominates most of the rear end.

This NSX gets a huge powerplant change because of Super GT rules. Rather than a mid-mounted biturbo hybrid V6, it uses a 2.0-liter turbocharged four-cylinder with direct injection. In race trim, the mill is good for at least 590 horsepower (440 kilowatts). The car weighs 2,313 pounds (1,049 kilograms) with the driver but without fuel.

In comparison, the NSX GT3 sticks with a production-based version of the standard coupe’s 3.5-liter biturbo V6, including the same crankshaft, block, pistons, heads, valve train, and dry-sump lubrication. However, the race car does not have hybrid assistance. A six-speed sequential gearbox sends power to the rear wheels.

The race-prepped LC 500 GT500 is another new addition to next season’s Super GT paddock next season as a replacement for the RC F GT 500. The sharp-edged coupe also looks great in competition trim with similar upgrades as the NSX like a huge wing and massive diffuser. Nissan is sticking with the GT-R for 2017 but has mildly updated styling.