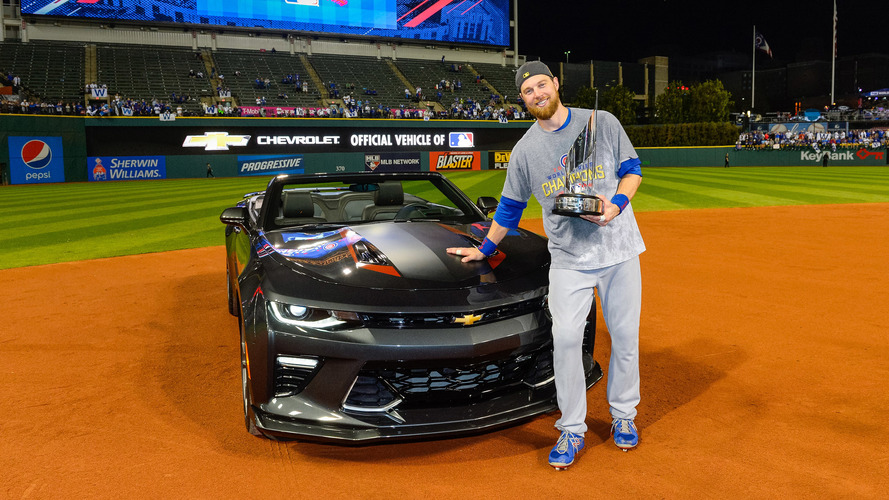 All the players for the Chicago Cubs can expect outpourings of love when they return to the Windy City after winning the team’s first Major League Baseball World Series since 1908. Ben Zobrist, the series’ most valuable player, can look forward to even more perks, including Chevrolet giving him a 2017 Camaro SS 50th Anniversary Edition.

Zobrist earned the MVP title in part by scoring the run that put the Cubs into the lead in the final game of the World Series against the Cleveland Indians. According to Yahoo Sports, he performed well in all seven games with a .357 batting average. He also had two doubles and a triple. Zobrist was part of the World-Series-winning Kansas City Royals last year, too. This was his first season with the Cubs.

While the Cubs celebrates its curse-breaking World Series victory, Chevrolet is also commemorating the Camaro’s 50th anniversary with a special version of the sixth-generation pony car. The package is available on 2LT and 2SS trim coupes and convertibles. They come in a Nightfall Gray Metallic exterior with dual orange stripes, which feature black accents, on the hood and trunk. A satin chrome grille adds a further flourish to the dark front end. The handsome upgrades also include 20-inch wheels that have orange brake calipers behind them. Inside, the upholstery features a combo of black leather and suede. Orange stitching and special badges provide a visual contrast for the cabin.

CLEVELAND ― The 2016 World Series Most Valuable Player Ben Zobrist was presented with a 2017 Chevrolet Camaro SS 50th Anniversary Edition, recognizing his strong performance on the field as the Chicago Cubs won their first World Series since 1908.

A media panel and first-ever online fan vote on MLB.com, the club sites and the MLB.com At Bat app helped determine the MVP Award winner.

“In this historic matchup, Zobrist’s performance on the field truly embodies the same ‘Never Give Up’ spirit that drives the Chevrolet team to innovate every day and that has made us the Most Awarded Automotive Brand two years in a row,” said Paul Edwards, U.S. vice president of Chevrolet Marketing. “We are proud to recognize the tremendous efforts of Zobrist with the MVP award and the 2017 Chevrolet Camaro 50thAnniversary Edition convertible.”

Chevrolet has been the Official Vehicle of Major League Baseball® since 2005 and through its Chevrolet Youth Baseball program has helped raise more than $28 million to aid hometown teams over the last 10 years. Nearly 5.2 million young people in communities across the country have benefitted from the program, and more than 1,500 Chevrolet dealers are involved.