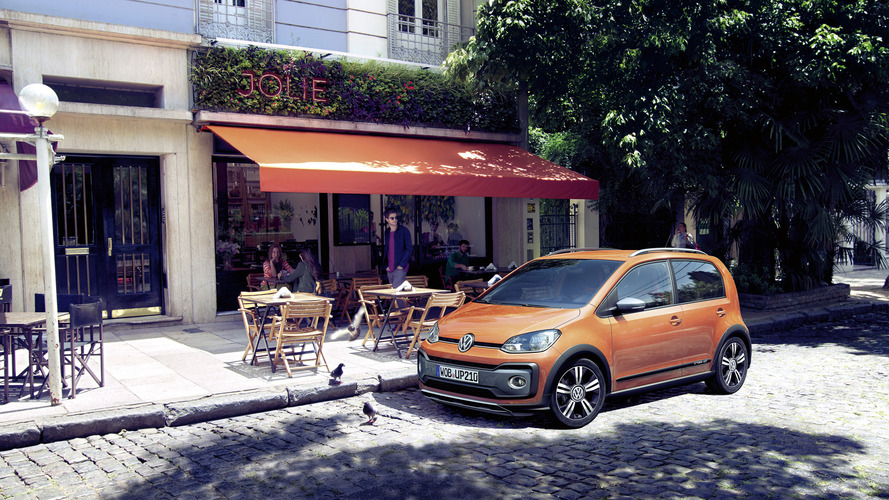 The German company has prepared mainly minor visual tweaks for the city crossover.

Volkswagen has started accepting preliminary orders for the refreshed version of its smallest crossover, the Cross Up!, on the European market. Prices start at €14,250 (may vary for different countries), €325 more than before, for the base model with 1.0-liter, three-cylinder, naturally aspirated engine with 75 horsepower (55 kilowatts).

Revealed for the first time during the 2013 Geneva Motor Show, the Cross Up! is now getting a facelift, which brings only minor revisions. These include a redesigned front fascia with slightly reshaped radiator grille, restyled fog lamps and new graphics for the headlights. The side repeaters have been transferred from the front fenders to the side mirrors, while there’s also a set of new 16-inch, two-tone alloy wheels.

Other than that, the model is virtually unchanged and features the same plastic body cladding, Cross Up! badges, and silver anodized roof rails. It’s not a real crossover, but still it comes with 15 mm higher ground clearance and rugged overall appearance.

As for the interior, it offers a standard leather package, color-coordinated dashpad, seat covers in “cross” design, and orange ambient lighting. Most likely, customers will be offered with the two infotainment options that were introduced with the refreshed version of the standard model earlier this year.

In addition to the naturally aspirated engine, Volkswagen will offer a beefier turbocharged version of the same motor. It adds 15 hp (11 kW) for a total of 90 hp (66 kW), channeled to the front wheels through a five-speed manual transmission.

The German company has also extended the range of colors and customization options for the standard Up! (pictured above). Three new exterior colors are available to order now - savanna gold metallic, blueberry metallic, and coral red uni. In addition, several new packages can also be ordered, including the so-called roof pack which brings a roof painted in grey and tinted rear side and rear windows

Small and adventurous: The new Volkswagen cross up! is now available to order

The new four-door cross up! is perfectly equipped for all weathers. It comes with off-road suspension and a 15 mm higher ground clearance, chrome-trimmed fog lights and cornering lights as standard. The four-door also features 16-inch "kalamata" alloy wheels, "cross" design front and rear bumpers, colour contrasting side mirrors and black side guard trims with the "cross up!" badge. A silver anodised roof rail and high-gloss chrome-plated strips on front and rear make for a sporty overall impression.

Volkswagen has also extended the already wide range of colours and customisation options for the up!. Three new exterior colours are available to order now: savanna gold metallic, blueberry metallic and coral red uni. In addition, new packages can also be ordered: in particular the "roof pack". This includes a roof painted in grey and tinted rear side and rear windows.