When a husband and wife are both professional stunt drivers, there can only be great results when they get behind the wheel of a custom Lamborghini Huracan.

Unleash a husband and wife duo of accomplished stunt drivers in a Lamborghini Huracán at the Italian supercar brand’s Newport Beach, CA, dealer, and the result is a fantastic drifting video. Sam and Stina Hübinette are both masters of car control, and one tiny mistake here could result in a very expensive accident because the Swedish couple slides around a whole fleet of Lambos.

The V10-powered Huracán has no problem spinning its wheels in stock form, but Hübinette’s example has a few upgrades that make the coupe easier to drift, according to Driving Line. A custom-fabricated hydraulic handbrake controls an extra set of brake calipers at the rear wheels. One pull is all it takes to loosen up the back end for a slide. The couple’s car also looks meaner than normal thanks to Vorsteiner’s Novara Edizone body kit, including a restyled front bumper, vented front fenders, a redesigned diffuser, and aggressive wing. A set of 20-inch Vorsteiner wheels completes the tasteful upgrades. 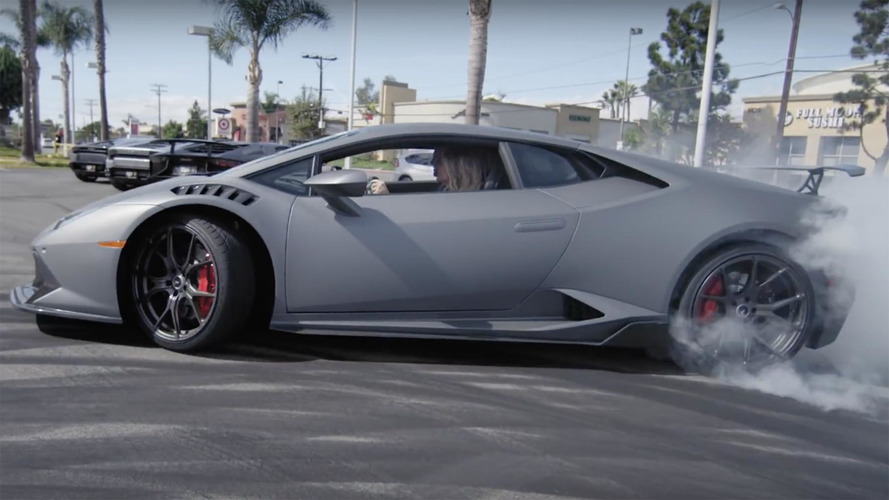 Sam takes control at first and deftly drifts the Huracán around the dealer. He then heads out back for an ultra-quick car wash. After a shot of espresso for the couple and some fresh rubber on the Lambo, Stina then gets behind the wheel for a little more drifting, and she makes some smoky donuts.

The Hübinettes are a dream couple when it comes to doing automotive stunts. Sam is a two-time Formula Drift champion and X-Games silver medal winner. He has also done some work behind the wheel on the big screen, including stunts in the third, fourth, and fifth installments of the Fast and Furious franchise.

Stina is quite a talented stuntwoman, too. She has been the stunt driver in many commercials in the United States, including for Fiat Chrysler Automobiles, General Motors, and Ford. Stina has also been an instructor for performance driving schools.