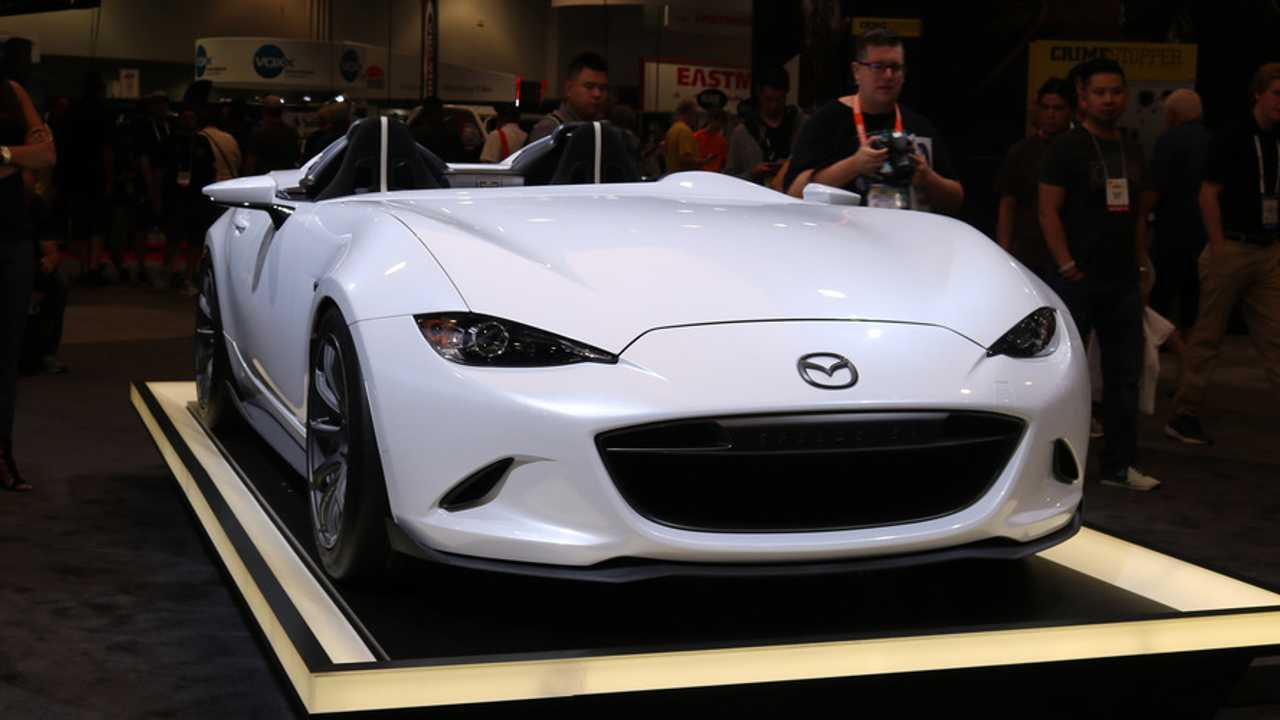 An updated version of last year’s SEMA concept, and a fresh take on the new Miata RF.

No one has ever accused the Miata of being overweight, but Mazda engineers are clearly very focused on putting the car on a strict diet. At last year’s SEMA show, Mazda showed off the Miata Speedster concept that, thanks in part to the lack of a roof or windshield, shed 150 pounds compared to the standard car. This year, the Speedster Evolution concept gets even skinnier, shedding another 100 pounds to bring weight down to a claimed 1,980 lb.

As before, it’s got a classic speedster look on the outside and a race-ready inside. Look for carbon door panels with fabric loop handles, a racing steering wheel and a fully digital race instrument cluster, plus bucket seats and a new tan-leather center-console treatment. Big weight-loss strategies this year included switching to a Braille battery, which saved about 20 pounds compared to the stock battery, as well as switching to the smaller, lighter brake calipers from the entry-level MX-5 Miata Sport.

Mazda also took the opportunity to work over the new Miata RF – the model with a power-folding, targa-like hardtop. Called the Kuro concept, it looks menacing in Satin Black matte paint, lowered on MX-5 Cup suspension and wearing 17-inch Rays wheels. Brembo dual-piston from the race car also help slow things down. But for serious go to match the show, Mazda also fitted a center-exit exhaust from OpenFlash. Not only is it a pound lighter than the stock exhaust, but it’s said to add 6-7 horsepower to the 2.0-liter engine’s 155 hp, bringing output to a healthy 161-162.

Of course, both these vehicles are just concepts, but Mazda is keen to point out that any dedicated racer could buy most of the part necessary to recreate these concepts (aside from the chopped roof, perhaps) from the aftermarket and the MazdaMotorsports.com catalog. In other words, if your budget allows, there’s no reason you couldn’t build these cars yourself.

Mazda North American Operations (MNAO) is no stranger to the Specialty Equipment Marketing Association (SEMA) Show in Las Vegas, Nevada, providing its designers the opportunity to let their imaginations run wild to create some truly stunning dream cars. This year proves no different with its two concepts: the lighter, more ruthlessly efficient MX-5 Miata Speedster Evolution and the stealth-like MX-5 RF Kuro, based on the 2017 MX-5 RF retractable fastback that will be going on sale early next year in the U.S.

MX-5 Speedster debuted at the 2015 SEMA Show as an ode to the lightweight, frills-free, pure driving experience of 1950s sports cars. Weighing just 2,080 lbs., MX-5 Speedster’s 150-lb. weight loss—an 11-percent reduction versus a stock MX-5 soft top—propelled its performance and elevated the open-air experience for which the roadster is known.

Following last year’s SEMA Show, MX-5 Speedster spent the summer at the Goodwood Festival of Speed in the U.K., where it ran the 1.16-mile hill climb. MX-5 Speedster then returned to Mazda Design Americas, where the Irvine, California-based team that created it experimented to see just how much lighter they could make their project. Led by Design Manager Ken Saward, the team extracted what remained underneath its dashboard and replaced its gauges with a digital display. They swapped its Brembo front brakes with the lighter rotors and calipers from the MX-5 Sport and Grand Touring models to further the weight reduction. Its 25.1-lbs. stock battery was replaced with a Braille GreenLite G20 Lithium battery that weighs just 4.5 lbs.

Ultimately, the design team shaved an additional 100 lbs. from the MX-5 Speedster—a total of 350 lbs., or 15 percent from the original MX-5 soft top’s starting weight. Now, it weighs a scant 1,980 lbs.

“With MX-5 Speedster Evolution, our goal was to further deliver the essence of what MX-5 has represented for the past 27 years—lightweight engineering and pure driving joy,” said Saward, who also owns and races a Spec Miata. “In the future, we might see if there is anywhere else we could take out weight.

Joining MX-5 Speedster Evolution on the Mazda stand is a new concept based on the 2017 MX-5 RF that will be going on sale early next year. Called MX-5 RF Kuro, it is a car that also adopts much of the MX-5 Global Cup technology but in a much more street-focused package. MX-5 RF Kuro also shares its adjustable suspension with the MX-5 Global Cup racecar as well as its Brembo dual-piston front brake calipers. It is painted Satin Black Metallic, a semi-matte black metallic color.

“We wanted to give MX-5 RF Kuro a stealth look to complement its sleek profile, providing subtlety and purpose,” said Saward. “As we move our brand in a direction we call ‘Mazda Premium,’ we want to embrace our longstanding motorsports heritage and reach forward with breathtaking designs like the MX-5 RF.”

Both vehicles were built using parts that Mazda autocross and racecar drivers can purchase via MazdaMotorsports.com for their MX-5s.