Behold the glory and awfulness of Toyota’s SEMA customs 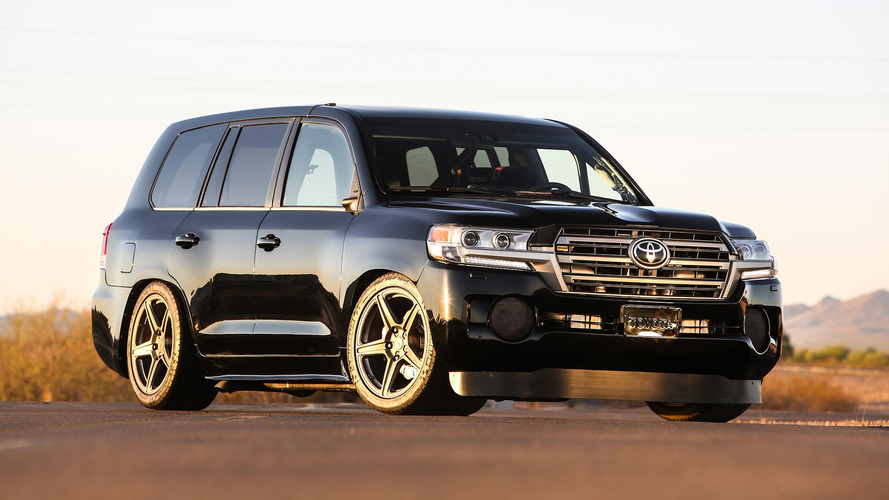 When it comes to big automakers like Toyota, SEMA can often be a smorgasbord of weird and wonderful stuff. This year, for example, Toyota is displaying 30 vehicles, some of which honor the past, while others point to the future or just show how crazy the tuners can get.

Six “extreme builds” are featured this year, and four are entered into SEMA’s Battle Of The Builders competition. Let’s take a look at each, below. Make sure you click the images to launch individual galleries of each car, and scroll all the way down for videos of the SEMA creations, too.

First of all, the thought of driving a 200-mile-per-hour Land Cruiser is terrifying. That thing can barely handle 80 mph, let alone 200-plus. Nevertheless, a pair of Garrett turbos are slapped onto the 5.7-liter V8 for a huge bump in power, and “every single thing inside this build has been touched,” according to Toyota. It’d have to be – to get the Land Crusher up to speed-record spec, it takes a lot of aero and stability improvements. Super scary, but hell, I’d give it a whirl on the Bonneville salt flats.

Not extreme, Xtreme. Toyota took its milquetoast four-door Corolla and turned it into... this. First, it’s a coupe, though those front doors don’t look super functional. It’s also two-tone, with a red-and-gray contrast, not to mention red wheels. Toyota also says this Corolla has a turbo engine and six-speed manual transmission, which sounds pretty neat, but we don’t have any more details on that front. Xtreme!

Click here to see the full gallery of the Corolla Xtreme

Not Xtreme, Extreme. The family-friendly Toyota Sienna gets its WRC on here, with its pulling-at-my-Subaru-heart-strings blue-and-gold paint job. The wide exterior, huge TRD brakes, performance wheels, ground effects, revised front fascia, and dual exhaust all look purposeful and mean, but there’s only so much hotness you can add to the minivan shape. Thankfully, the real cool stuff is found inside, with a Learjet interior, iPad controls for the whole vehicle, and an air ride system.

Click here to see the full gallery of the Extreme Sienna

Okay, this one’s super rad, and it’s real. Meet the Toyota Motorsport Germany 86 Cup Series car, the first spec racer built for a one-make overseas motorsport series, making its debut in the U.S. for the first time. Think of as Toyota’s competitor to Mazda’s MX-5 Cup car. I love the red-and-white livery, and the huge wing out back. This is one time where all those aero add-ons aren’t just for show.

Now, back to your typical SEMA ridiculousness. The Prius is one of Toyota’s most popular vehicles – and one of its best-known nameplates – so of course, even the hybrid hatch gets some love here in Las Vegas. I’ve always really liked the idea of a performance package in the shape of a Prius, and this car’s got some track validity to it. According to Toyota, this Prius G actually pulled 0.99 Gs on the skid pad at Willow Springs International Raceway, which is Corvette territory. That’s pretty cool.

Click here to see the full gallery of the Prius G

Another race car... er, truck! This one’s the Tacoma, based on the very cool TRD Pro model that I recently got to drive in Hawaii. This truck will race in the MINT 400 – also known as “The Great American Off-Road Race.” Toyota says this rugged Taco largely uses stock Tacoma parts, though the truck is obviously modified for desert racing.

Toyota Goes to the Extreme with SEMA 2016 Builds

Toyota Unveils Custom Builds and Celebrates the Past and Present

TORRANCE, Calif., (November 1, 2016)—Today Toyota revealed an unprecedented suite of 30 vehicles on display at the 2016 Specialty Equipment Market Association (SEMA) Show. Toyota selected each vehicle to either honor the past, explore the present or reveal the extreme—and in some extreme cases, all three of these elements come into play. There is even a special display honoring Corolla’s 50 years.

“The Toyota call to action is ‘Let’s Go Places,’ ” said Steve Appelbaum, Toyota Motor Sales National Engagement Marketing Manager. “This phrase encompasses what we are, what we do and what we create. It’s our guiding principle and at the core of our promise to customers. Our SEMA display demonstrates the breadth of that promise, across all generations of Toyota vehicles.”

The six Toyota extreme builds, four of which are entered into the Battle of the Builders® competition, embody the SEMA spirit of imagination and innovation—taking stock builds and transforming them into something inspired.

Appelbaum commented, “We have a lot to celebrate. This historical collection demonstrates the unique and constant innovation of Toyota. There’s never been an exhibit quite like this one at SEMA.”

Here is a recap of what is on display through Nov 4th.

Land Speed Cruiser—It’s pretty and sleek on the outside but it’s what’s on the inside that counts here. Twin Garrett turbos under the hood make for astounding news. They’re breathing in to a fully built 5.7-liter Toyota V8 getting power to the earth via a custom ATI transmission. This is the “World’s Fastest SUV,” capable of a blazing 220 miles per hour. Every single thing inside this build has been touched.

XTREME Corolla—Toyota took the main street Corolla and drove it into the SEMA fast lane with this build. This was a four-door and now it’s a sexy coupe. The wheels, the two-color paint, clean lines, custom interior, turbo engine, a six-speed manual, Sparco seats and a JBL sound system all come together to put this Corolla in a class of its own.

Extreme Sienna—This is the most over-the-top Swagger Wagon ever. The exterior is super wide with big TRD brakes, performance wheels and tires, a splitter, rear diffuser, spoiler and dual exhaust. High-end sport luxury is how it strikes you. Its lap-of-luxury Learjet interior is something to behold. The whole vehicle is controlled by an iPad™, including the air ride system. This is NOT just a show car, but one that you can drive on the street with zero issues.

Prius G—Building on the natural handling prowess of the stock Prius comes the Prius G, which grips the road better than hot bubblegum on asphalt. The Prius is not just an eco-car anymore. This Prius pulled .99 g on the skid pad at Willow Springs International Raceway, putting it in the ballpark of cars like the Corvette and Viper.

Toyota Motorsport GmbH GT86 CS-Cup Imported to US for SEMA

Toyota Motorsport GmbH GT86 CS-Cup —This Toyota Motorsport Germany 86 Cup Series is the first cup spec built off of a stock 2017 86. Toyota is pleased to show the car for the first time in the U.S. at SEMA. It’s designed for a one-make overseas series, and was brought here to inspire, to innovate and to excite. It’s built solely for the track. Its livery pays homage to Toyota’s racing heritage with a cool retro red and white design. The aero package looks awesome, but it also helps the car stick with functional downforce.

Tacoma TRD Pro Race Truck —The all-new Tacoma TRD Pro Race Truck lets you go places most other trucks would ordinarily see only on a map. Toyota plans to showcase this special truck as an entry in “The Great American Off-Road Race”— the MINT 400. However, the driver names are not yet released. Though modified for desert racing, this vehicle is still mostly a stock Tacoma.

Corolla 50th Anniversary Display—Just outside the Toyota booth, in the Patio Annex of the Las Vegas Convention Center, visitors are invited to see a display Celebrating 50 Years of Corolla with representative models from each of the 11 generations.

Other key specimens of Toyota’s heritage can be seen, such as the 2000GT, also known as the “Japan’s first super car.” The Great Race Corolla will also be positioned in the booth.

The Wholesale Parts section of the exhibit is hosting live interviews with a bevy of celebrities.

The entire collection of project vehicles can be seen in the Toyota display booth (#24800) in Central Hall and ln the adjoining Patio Annex at the Las Vegas Convention Center, November 1-4, 2016.