This rare 1966 Ford Mustang Shelby GT350H is hitting the Mecum Auction block next month with horsepower and history to match.

The Shelby GT350H was first introduced in 1966. It was a sort of unusual collaboration between Ford and Hertz in which customers of the rental agency were allowed to drive this one-of-a-kind “rent-a-racer" off the lot and onto the road for as little as $17 per day and 17 cents per mile.

Just 1,003 initial examples were produced to meet FIA regulations for the Group 2 Sedan category, and even less featured a manual transmission; just 80. Now, one of these rare examples is heading to auction — oh, and did I mention it was owned by Carroll Shelby himself? 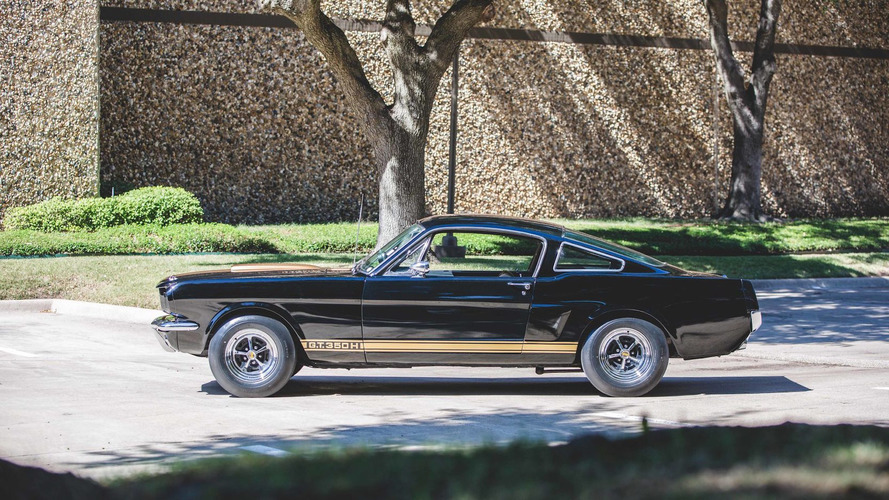 Decorated with the production number 1822, it was initially registered and owned by Carroll Shelby before it was delivered to Hertz in Chicago, Illinois. It features the original V8 engine good for 306 horsepower (228 kilowatts) and 329 pound-feet (446 newton-meter) of torque, a three-speed automatic transmission, dual exhaust, and a 0-60 mph (0-96 kmh) time of about 7.0 seconds when new. It was race ready out of the box, per any good Shelby product.

Inside, the black leather interior and wood-grain steering wheel remains, as do most of the original gauges and instrument cluster. On the outside, the original black paint and gold striping has been refreshed, and a set of period-correct Magnum 500 wheels wrapped in Firestone Polyglas tires have been fitted. The entire package having been given a full restoration, inside and out, features nearly everything you’d expect to find new on the pony car in 1966.

It’s headed to the auction block later this week at the Mecum Dallas sale. No early estimates have been given, but the market has these rare Mustangs currently valued at around $135,000 in pristine condition. With ties to Carroll Shelby and it being an auction setting, it’s bound to go for even more.

Previously owned by Carroll Shelby, this GT350H, Shelby number 1822, is documented with the title bearing his name. Originally delivered new to Hertz Rental Cars in Chicago, the car is equipped with the specially designed, high-performance, C6 3-speed automatic transmission and standard-issue Shelby 289/306 HP V-8 engine with 4-barrel carburetor and dual exhaust. Hertz wanted to offer customers the chance to ‘Rent a Racer,’ and it worked well as a marketing product bringing would-be racers into the agency to check out, or actually rent, a full-blown Shelby Mustang. In most markets, they rented for $17 per day and 17 cents per mile. Hertz ordered 999 cars, most with the automatic, but a few with manual 4-speeds. To rent a manually equipped GT350H, customers had to join the Hertz Sports Car Club, a nifty group which required prospective members to demonstrate their ability to operate a manual transmission. An HSCC membership card was issued upon successful demonstration. The GT350H was denoted by the black paint with gold stripe work and the “H” behind the GT350 moniker, but was otherwise a standard Shelby GT350. Interestingly, the original order number from Hertz was 1,000 cars, thus, the “H” could have just as easily denoted homologation, since FIA rules dictate that 1,000 cars need to be produced to participate in the Group 2 Sedan Category. Nicely, the 1966 GT350 featured numerous improvements over the 1965 cars, including lengthened exhausts that ended past the rear axle, revised suspension damping, a stamped steel hood instead of the fiberglass unit, plexiglas quarter windows instead of Mustang vents and more. Front disc and rear drum brakes do a great job slowing and stopping the H while the live rear axle with semi-elliptical leaf springs and independent front suspension with coil springs provide athletic handling and race-car firm ride. The black interior of this GT350H features the correct camera-case-finish glovebox door and gauge surround, standard Mustang upholstery and a wood-grain steering wheel. A tachometer mounted atop the center of the dash lends a racy edge. Rolling on correct Magnum 500 wheels wrapped with Firestone Polyglas tires, this GT350H is a rare bird with a unique history—if only cars could talk.