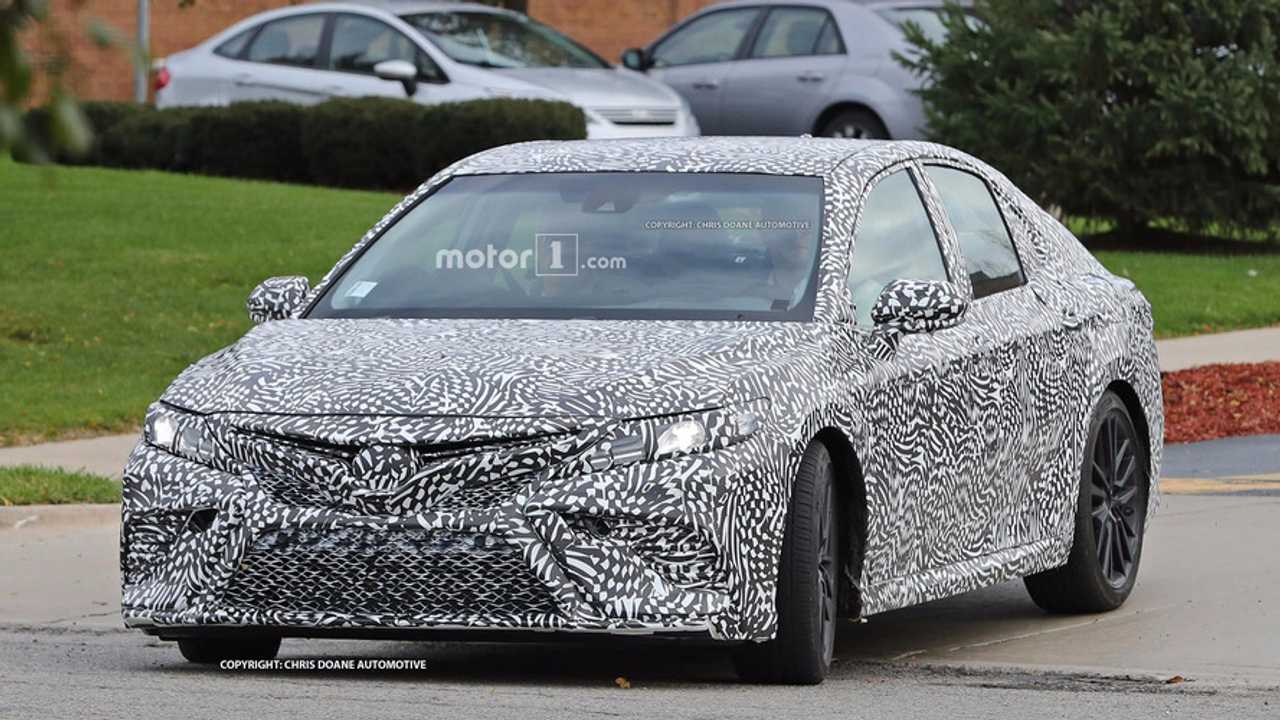 This is the best look at the next-Camry yet. The model appears to have a major aesthetic upgrade. It actually looks really good.

Toyota is doing a good job of keeping the next-generation 2018 Camry under wraps, but a new batch of spy photos catches the future iteration of the popular sedan testing on the road. The new model appears to shake off its reputation of being the automotive equivalent of the color beige because the sharper styling looks a lot meaner. This example has a few parts that make it even more aggressive.

Whereas the last Camry we saw under development wore a ton of cladding, this one swapped over to camouflage. It doesn’t hide the vehicle’s lines nearly as well. In front, there’s the wide grille and sharp headlights similar to the leaked picture of the next NASCAR racing version. The intakes are a little smaller here, but there’s a strong family resemblance.

This Camry looks great in profile, too. The nose tapers downward to a point, and there’s a prominent crease along the shoulder line. The roof is slightly curvaceous and appears to split the difference between the stylish appearance of a four-door coupe and the extra headroom in the back of a traditional sedan. The black wheels and low ride height on this example give it a performance-oriented stance, especially by Camry standards.

Narrow taillights wrap around the rear, and the designers mold a small spoiler into the trunk. This one also has dual-exit exhausts that come out from each corner. While not as aggressive as a full diffuser, the extended rear fascia looks sporty in the way that it surrounds them.

We don’t suspect basic trims of the next-gen Camry would look this aggressive, and this one is probably is likely a sporty trim for the lineup. Even without the performance-oriented parts, this model is still a lot more visually interesting than the current model on the road.

Rumors indicate that a 2.5-liter four-cylinder would be the Camry’s base engine, but it would run on the Atkinson cycle for greater fuel economy. The new model should weigh less thanks to a switch to the modular TGNA platform, which is also under the latest Prius. In addition, a 2.0-liter turbocharged four-cylinder reportedly joins the lineup, and the engine might make sense for this sporty variant. Expect hybrid eventually, too. It’s not currently clear whether a V6 would also remain part of the lineup.

To have the next-gen Camry on sale for the 2018 model year, expect a debut sometime in 2017. We anticipate the premiere at an event in the first half of the year, maybe even at the North American International Auto Show this January in Detroit.