Let's check in with the gorgeous Speedback GT 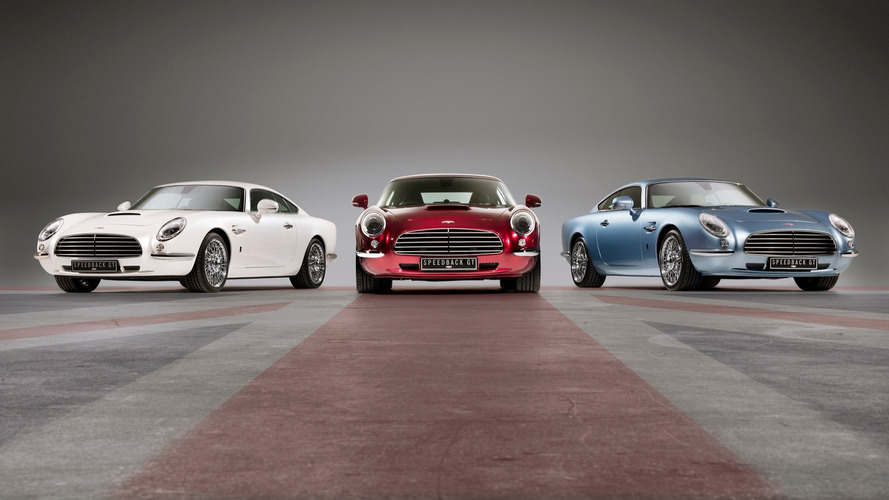 Do we need a reason to talk about this retro beauty?

David Brown Automotive is showing off the three most recent examples of its gorgeous Speedback GT, which happen to be finished in the same colors as Great Britain’s flag, the Union Jack. The Coventry-based company is trying to revive the dying art of coachbuilding contemporary cars. The Speedback GT actually starts life as a Jaguar XKR that is crafted into a something that vaguely resembles the iconic Aston Martin DB5, James Bond’s company car.

That car was the high point of gearbox magnate David Brown’s tenure as Aston’s owner. The fact DBA also bears his name is purely a happy coincidence, as the company’s founder is also called David Brown.

The XKR base car is stripped down until only its frame and running gear remain. DBA’s craftsmen then build it back up with 142 aluminum panels, hand-made using traditional coachbuilding techniques.

Only the windshield frame remains untouched. Even the roof is heavily altered to accommodate a top-hinged tailgate where a standard XKR has a conventional truck lid. The bottom half the tailgate folds down to create a seat.

Each car is painted a bespoke color chosen by the owner. The cars here are painted Ruby Tuesday, Blue Moon, and White Knight. The paintwork alone takes eight painstaking weeks to apply, so you can imagine how long the rest of it takes to put together.

Likewise, the interior is fitted out with the owner’s choice of upholstery and trim. The front half of the cabin is lifted wholesale from the XKR, but the rear is open to interpretation.

The cars pictured here are the third, fourth, and fifth of five examples built so far. They were brought together for a suitably patriotic photoshoot - this many Speedback’s will probably never be seen together again. This is what happened behind the scenes.

According to DBA, more are in build and on the books. Next year, it intends to move to a new facility with capacity to build to up to ten cars a year, plus a new model.