Tesla wants to turn your home into a power station 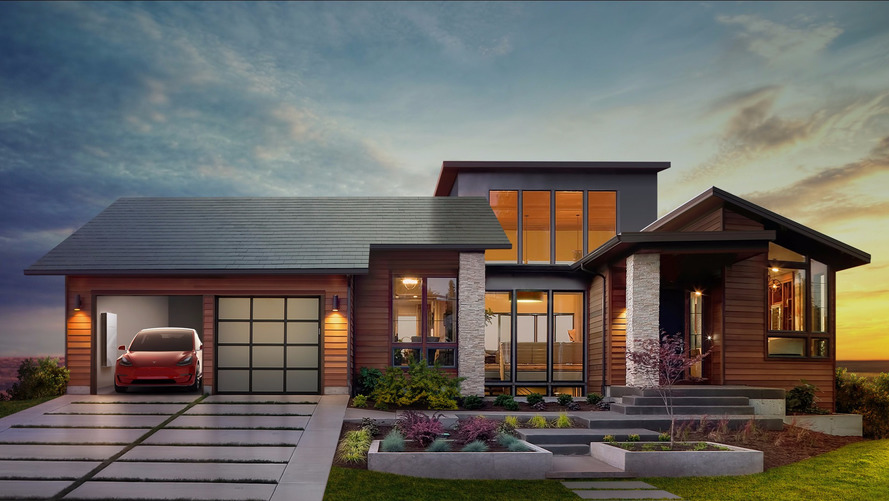 Tesla has unveiled its new solar panels which look exactly like a conventional roofing tile and are claimed to cost less.

Tesla has unveiled its new solar panel roof tiles and Powerwall 2 in an event at Universal Studios.

CEO Elon Musk took to the stage to talk about the panels, which were mounted on a house on the Desperate Housewives set, pictured below.

The tiles look for all the world like a conventional roofing tile, but they contain embedded photovoltaic cells. The surface of the tile itself is actually made from textured, colored glass. As fitted at the unveiling, they resembled conventional slate tiles; presumably a whole range of styles would be possible.

The event also acted as an explainer as to why Tesla should be allowed to take over SolarCity, which produces photovoltaic cells. Tesla and Panasonic recently announced their intention to collaborate in producing the cells at SolarCity’s in-build New York State Gigafactory.

Musk was cagey about how much the tiles would cost, either per tile or per square foot. But he did claim that the “installed cost is less than a normal roof and the cost of electricity.”

Tesla’s website also points out that a solar panel could increase the value of your home.

It was confirmed, however, that the Powerwall 2 will cost $5,500. The pack contains a pair of 14 kilowatt hour lithium-ion batteries, more than twice the capacity of the original Powerwall. According to Tesla, it holds enough electricity to power a four bedroom home with lights, refrigerator, and other appliances for an entire day.

The pack also features a built inverter - the previous version required a separate inverter - that is specifically designed to work with the solar panels.

Musk reckons the panels will be highly durable. “We expect this to have two or three times the longevity of asphalt. It’s really never going to wear out. It’s got a quasi-infinite lifetime. It’s made of quartz.”

The Powerpack 2 storage box, intended for business use, was also revealed, having been upgraded along similar lines to the Powerwall.

It is hoped the panels will be ready for installation during summer 2017.