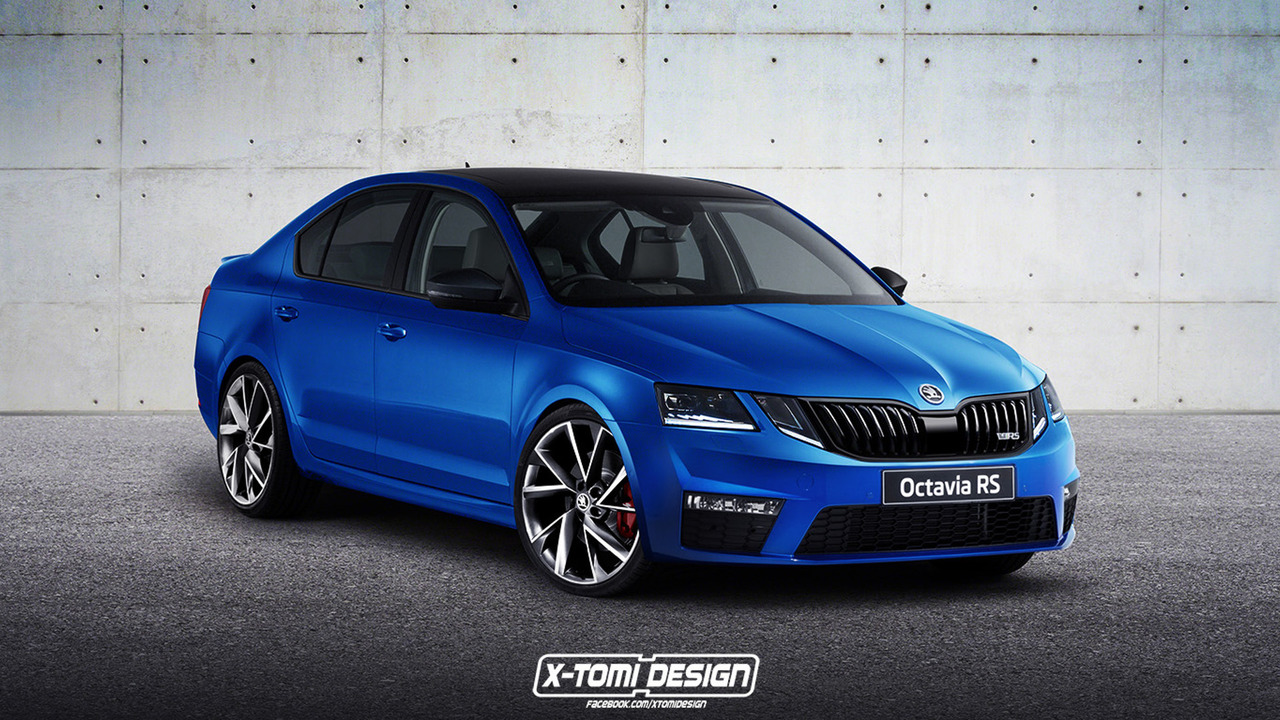 Hot on the heels of this week’s reveal, the Skoda Octavia facelift is back in a speculative render showing off a potential look for the go-faster RS version.

Skoda took the wraps off the facelifted Octavia earlier this week, but without showing the rugged all-wheel-drive Scout and the sporty RS trims. That’s probably because the two models along with the diesel RS are rumored to enter production in the second half of April, whereas the Active, Ambition, Style, and L&K versions will go on sale before the year’s end and will start reaching customers from early 2017.

Seen here is a very possible look for the Octavia RS facelift with a blacked-out front grille complemented by the side mirror caps and roof also painted in black. Dressed in a metallic Race Blue shade, the car rides on a 19-inch set of alloy wheels borrowed from the Superb Sportline. The real deal will look slightly different taking into account the front bumper has been pretty much sourced from the outgoing version, but even so the render does manage to paint an accurate picture of what to expect. Overall, it’s an improvement when compared to the lesser versions, but we are still having problems getting used to the new split headlamp design.

Besides the new and heavily criticized face, the Skoda Octavia RS will also get optional full-LED headlights, slightly modified taillights, and quite possibly a mildly updated rear bumper. On the inside, all of the infotainment systems are going to feature a fancier capacitive display and touch-sensitive buttons replacing the physical controls. The top-spec Columbus will receive a larger 9.2-inch touchscreen, while a heated steering wheel and LED ambient lighting are likely on the agenda as well.

The existing RS 220 and RS 230 versions are going to be joined later on by a beefier RS 245 scheduled to enter production from late May. As the name implies, it’s going to have the 2.0 TSI dialed to extract an additional 15 horsepower for a grand total of 245 horsepower. It might receive a minor bump in torque over the other two, which are both rated at 258 pound feet (350 Newton meters). The standard electronically-controlled differential front axle lock of the RS 230 will likely be carried over. The same goes for the diesel-powered Octavia RS with its 2.0 TDI producing 184 hp (135 kW) and 280 lb-ft (380 Nm) delivered to the front wheels or to both axles.

The future of the RS models seems to be in jeopardy at this point, with Skoda’s boss Bernhard Maier announcing the Czech brand will analyze whether these cars represent a viable business case. That being said, the Octavia RS has been a success for Skoda and it seems highly unlikely the model is in any real danger of getting the axe.

Attached below is a gallery depicting the regular Octavia facelift in the luxed-up Laurin & Klement trim and the more affordable Style guise.