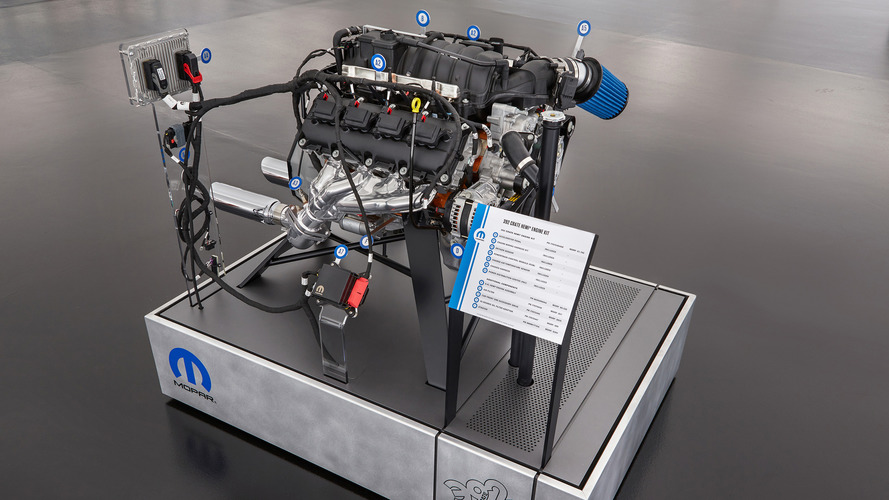 New electronics kit makes putting a modern motor in your classic car easier than ever.

Factory-backed crate engines are nothing new, but Mopar wants to make it even easier to put a modern Hemi V8 engine into your classic car. The automaker is rolling out a pair of Hemi crate engine kits that provide all the electronics and accessories necessary to put a new Dodge V8 into any 1975 or earlier car.

Mopar is offering kits to go along with its 5.7- and 6.4-liter Hemi V8 engines. The kit includes an engine management computer, drive-by-wire gas pedal, a wiring distribution system, and a full wiring harness. It won’t quite be plug-and-play, but it should make it easier than ever to get all the complicated electronics of today’s engines working in yesterday’s hot rods. The default engine tune for the 5.7-liter mill provides 383 horsepower and 425 pound-feet of torque, while the 6.4-liter V8 will crank out 485 hp and 472 lb-ft. Mopar will even offer bolt-on accessories for air conditioning and power steering pumps.

Gallery: Mopar crate engine kits make it easier to put a Hemi in your hot rod

The Mopar brand announced today during a press event at the Specialty Equipment Market Association (SEMA) Show in Las Vegas new Mopar Crate HEMI® Engine Kits that provide enthusiasts a factory-backed, efficient option for plugging Gen III HEMI engines into iconic Mopar vehicles from the 1970s and earlier. The new Mopar 345 Crate HEMI Engine Kit for the 5.7-liter engine and Mopar 392 Crate HEMI Engine Kit for the 6.4-liter HEMI can be paired with model year 1975 and earlier vehicles, enabling owners to inject modern HEMI power into muscle-car era machines such as the Dodge Charger, Dodge Challenger, Plymouth ‘Cuda and many other makes and models.

“Our new Mopar Crate HEMI Engine Kits answer enthusiast demand for a relatively simple solution for plugging modern-day HEMI engine power into their classic Mopar rides,” said Pietro Gorlier, Head of Parts and Service (Mopar), FCA – Global. “The engine kits include the hardware to plant a 5.7-liter or 6.4-liter HEMI engine under the hood with the factory-backed confidence that comes when using Mopar parts. They also offer optional front-end accessory kits like power steering or even exhaust manifolds to make installation easier. Starting today, our fans can order the kit online and start working on their favorite project with the peace of mind that comes when using a Mopar product.”

The Mopar 345 Crate HEMI and 392 Crate HEMI Engine Kits, both available for purchase now through FCA US LLC dealers either in-store or online at www.Mopar.com/CrateHEMI, include a power distribution center, a powertrain control module (PCM), engine and chassis wiring harnesses, an accelerator pedal, O2 sensors, ground jumper, charge air temperature sensor and in-depth information sheets on installation. The kits, compatible with respective 5.7-liter or 6.4-liter engines built in 2014 or newer, are shipped in distinctive packaging featuring either the 345 or 392 logo.