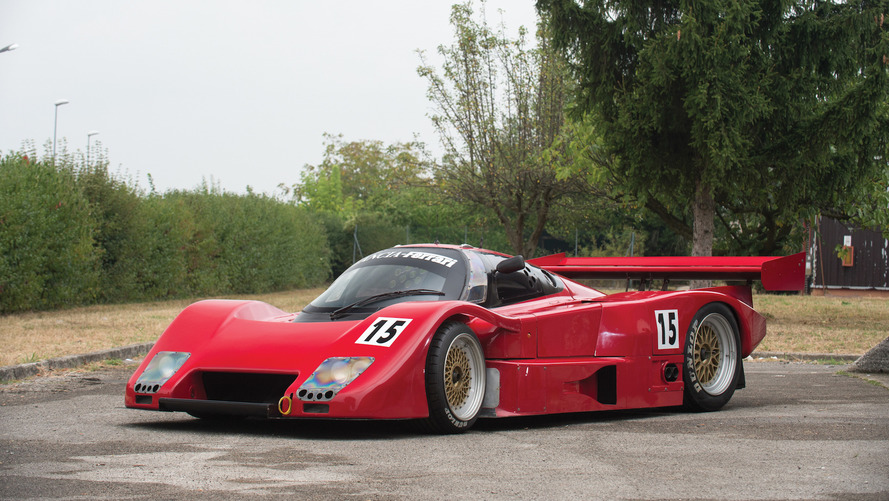 This rare Lancia-Ferrari Group C racer is in need of a new home.

You probably didn’t know that in the early 1990s Lancia and Ferrari partnered to develop a Group C racer that would compete with the likes of the Porsche 956, Jaguar XJR-9, Mazda 787, and others. It was dubbed the LC2, and though it never found storied successes in Group C, it will find its way to the auction block next month.

One of many impressive vehicles crossing the block at the RM Sotheby’s Demise Ruote sale in Milan, Italy, this one-of-a-kind Lancia-Ferrari LC2 racer wears chassis number 0009. In its short career, it took to tracks like Le Mans, the Nurburgring, and Magny-Cours in France, just to name a few.

Developed by Cesare Florio, former head of Martini Racing, he had a vision to create a Group C racer that would beat the likes of the then new Porsche 956. Pinging Lancia for development, Ferrari for an engine, and Abarth and Dallara for a chassis, it would then be fielded by Martini in hopes of success.

Unfortunately, that culmination of talent didn’t make for a truly competitive vehicle. While the Ferrari 2.6-liter biturbo V8 under the hood made it more powerful than the Porsche 956, a number of reliability issues kept the LC2 limited to just three wins and 13 poles in 51 races under the Lancia-Martini racing umbrella, before the program shuttered completely in the late '80s, only to live on incrementally in the early '90s by a few privateers.

Still, the LC2 seen here is a legendary vehicle and would make the perfect addition to any collection. It’s one of the last examples to ever see the track, and wears a handsome red exterior finish with most of the original components you’d find on the car new in 1991 still affixed, including harness seat belts and Dunlop racing tires.

Considerably awed by Porsche’s brand-new 956 Group C car, and forced to change cars due to new FIA regulations, Cesare Florio and the head of Martini Racing immediately began work on a car that could be competitive against it—what would become the LC2. The solution was a Lancia-built, Ferrari-engined sports car. The LC2 was equipped with Ferrari’s naturally aspirated V-8, reduced in capacity to 2.6-litres, and topped with twin-turbochargers—producing a maximum output of 650 horsepower. The body was an aluminium monocoque with Kevlar and carbon fibre bodywork, designed to feed air through the nose along the sides, cooling the turbochargers. Despite gaining pole position against the fearsome 956 multiple times, the LC2 won three victories in its career. On offer here is LC2 chassis number 009, which has raced at Le Mans, Nürburgring, and Magny-Cours, among other tracks. Presented in red and fitted with harness seatbelts and Dunlop tyres, it is offered with an assortment of spare parts and would make an exceptional historic racing machine.