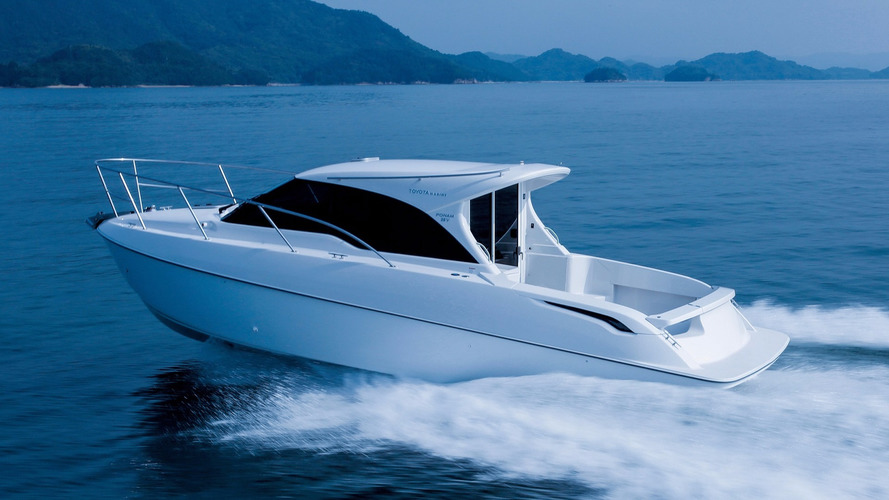 The new Ponam-28V sports cruiser may well have a plodding SUV motor, but it's a speedy thing.

Toyota has unveiled the latest edition to its Ponam boat range, the 28V sports cruiser, which is powered by a Land Cruiser engine.

The 3.0-liter, four-cylinder turbo diesel motor is usually found in the Land Cruiser Prado SUV and Hilux pickup truck. In the Ponam-28V, it has been tuned specifically for marine use and serves up 256 horsepower (191 kilowatts). Toyota doesn’t quote a top speed, but as it only weighs 8,025 pounds (3,640 kilograms), it should slice through the water at a pretty high rate of knots.

That low weight is the result of Toyota’s Hybrid Hull construction. The V-form hull is made from a combination of fiber-reinforced plastic, aluminum, and carbon fibers. According to Toyota, the result is a hull that is seven times stronger than if it were only made from FRP, and 10 percent lighter than a similarly-sized aluminum hull.

Measuring just under 30 feet (9.14 meters) long and just over 10 ft (3.1 m) wide, the 28V can accommodate 12 people. The saloon features two small sofas either side of a table and a single large chair, and a double bed ahead of the helm station. The aft deck is comparatively large for a boat of this size and features fold-out furniture.

The control system is based on in-car systems, making the boat easy to pilot in the calm waters and coastal areas it is designed for. It comes equipped with a virtual anchor that holds the boat over a fixed point, too.

Like its siblings in the Ponam series, the 28V is built by contractor Yanmar. It is only on sale in Japan, but anyone keen enough would no doubt be able to get one delivered elsewhere in the world. Prices start at 19.2 million yen ($183,000). Toyota hopes to move 24 units via its network of 50 dealers.

Toyota said it will "continue to promote its marine business be developing attractive products that are designed to provide rewarding leisure time activities and to support a fulfilling lifestyle."