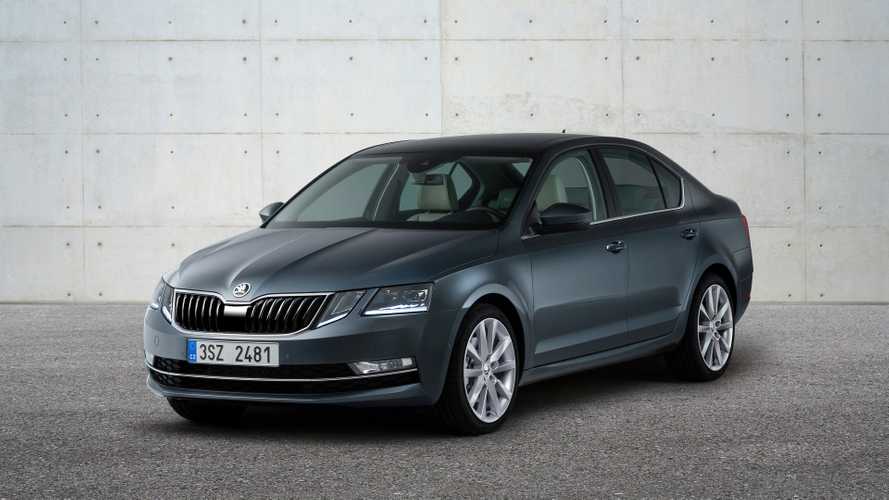 Skoda's best-selling model gets a new face for its mid-cycle refresh, along with more safety kit borrowed from the Superb.

Following months of speculations about a split headlight design, the facelifted Octavia has arrived to confirm the rumors. The new look certainly makes the car stand out from the current crop of affordable compact models, but we are not so sure the Mercedes E-Class W212-like dual headlight setup is going to be appreciated by all people. Along with the new headlights comes full LED technology to replace the previous bi-xenon + LED daytime running lights of the pre-facelift Octavia.

Not much else has changed on the outside, although the front bumper looks a tad different and hosts redesigned fog lights. The side profile has been virtually carried over, while at the back we are able to notice refreshed graphics for the LED taillights. New alloy wheel designs in sizes from 16 to 18 inches round off the exterior tweaks.

Stepping inside the roomy cabin, the top-spec Columbus infotainment system is now rocking a larger 9.2-inch touchscreen display as seen in the Kodiaq. Gone are the physical controls flanking the screen as these have been replaced by capacitive-touch buttons to provide the center console a sleeker appearance. All four infotainment systems now come with capacitive displays with a glass design to make the Octavia feel more modern on the inside. The attached video is also the option of ambient lighting, much like in the recently facelifted Seat Leon sister model.

Speaking of staying up to date, Skoda is introducing a wider array of assistance systems taken from the flagship Superb. At an additional cost, buyers will be able to opt for predictive pedestrian protection working together with the Front Assist system, while the parking assistant has been upgraded. Other novelties brought by the Octavia facelift include Rear Traffic Alert and Blind Spot Detection, as well as a trailer assistant that will come in handy when towing a vehicle.

Also sourced from the Superb is the removable torch inside the Octavia Combi’s trunk, as part of a broader “Simply Clever” collection of handy features now also including a customizable key to allow multiple users save their own car settings. An optional heated steering wheel is making its debut on Skoda’s most popular car, as are the foldable tables mounted on the back of the front seats.

Underneath the hood, customers will get to pick from five gasoline and four diesel engines ranging in displacement from 1.0 to 2.0 and varying in output from 84 horsepower (63 kilowatts) to 184 hp (135 kW). Almost all engines can be had with a six- or seven-speed DSG, while the beefier 1.8 TSI and 2.0 TDI can be linked to an all-wheel drive system for extra grip. The Dynamic Chassis Control (DCC), which made its debut earlier this year, will soldier on with Comfort, Normal and Sport modes.

There aren’t any details concerning the vRS models, but that’s because the sporty editions are bound to arrive later in 2017. Word on the street says there’s going to be a more powerful vRS 245 model, which as the name suggests will dial the 2.0 TSI to 245 horsepower.

Meanwhile, the lesser versions will go on sale before the end of the year, with deliveries scheduled to begin early 2017.

Mladá Boleslav, 27 October 2016 – ŠKODA has made major revisions to the bestseller. The ŠKODA OCTAVIA will be available from the end of the year with a newly designed front and rear section, state-of-the-art driver assistance solutions, infotainment and connectivity, as well as new equipment. The compact model is presented in top form as both a saloon and estate, and once again highlights its unique position in the category.

“The ŠKODA OCTAVIA has always been in a class of its own in the compact segment,” says ŠKODA CEO Bernhard Maier. “As the 'heart of the brand', the Octavia has decisively shaped ŠKODA’s outstanding development from the very start, and has made the company what it is today: an internationally successful automotive manufacturer with a presence in more than 100 markets worldwide. With the now extensively revised ŠKODA OCTAVIA, we are keen to continue this development sustainably.”

The ŠKODA OCTAVIA is the Czech automaker’s best-selling model by far. At the upper end of its segment, ŠKODA’s bestseller has set new standards in terms of space, functionality, safety and comfort technology, design and value for money. In the 20 years since the 1996 reintroduction of the ŠKODA OCTAVIA, five million customers from all over the world have opted for one of the model versions in the OCTAVIA family. With the extensively revised version of the ŠKODA OCTAVIA, the brand plans to continue the success story of its predecessors and to further strengthen ŠKODA’s position in the international markets.

The lines of the new ŠKODA OCTAVIA have been further streamlined, especially at the front. The two adjacent headlights form the dual face with a crystalline look. On request, they shine in full-LED technology. The brand logo has gained even more presence, the front is more powerful, wider, and has more character.

The space available in the revised ŠKODA OCTAVIA remains one of the largest in its class. Both the saloon and estate offer 1782 millimetres of interior space and 73 millimetres of legroom in the rear. Their luggage compartments measure 590 and 610 litres, respectively; with folded rear seat backrests up to 1580 and 1740 litres respectively. There is an optional electric tailgate available for OCTAVIA COMBI.

The revision has brought new infotainment systems to the ŠKODA OCTAVIA. All four – Swing and Bolero as well as the navigation systems Amundsen and Columbus – now have capacitive displays in glass design that respond to light touch. The Columbus now features a full 9.2-inch display; the top system has a WLAN hotspot and, if desired, a SIM card module with an LTE speed for an ultra-fast connection to the Internet.

The revised ŠKODA OCTAVIA is also moving ahead with assistance systems – with technologies that have so far only been used in the mid-class. If the OCTAVIA is used as a towing vehicle, the trailer assistant will take over the steering when the vehicle is slowly reversing. . Predictive pedestrian protection complements Front Assist. In addition, the parking assistant has been further optimized. Thanks to the rear radar, Blind Spot Detection and Rear Traffic Alert ensure safe lane changes and also help while reversing out of a parking space. The rear-view camera displays the car’s immediate surroundings on the on-board monitor.

New features have been added to the ŠKODA OCTAVIA’s numerous ‘Simply Clever’ solutions: a customizable key, allowing multiple users to save their own vehicle settings, as well as a heated steering wheel, folding tables on the back of the front seats, bottle holders which facilitate the opening of PET bottles, and the estate version features a removable torch in the boot.

The five TSI and four TDI that make up the engine programme combine strong performance with low fuel consumption. Their displacements range from 1.0 to 2.0 litres, the output range begins at 63 kW (84 hp) and ends at 135 kW (184 hp). For almost all engines in the revised ŠKODA OCTAVIA, a DSG transmission with six or seven gears is available in addition to manual transmission. ŠKODA supplies all-wheel drive 4×4 for the 1.8 l TSI and the 2.0 l TDI. A highlight in the chassis is the optional Dynamic Chassis Control (DCC), which enables the driver to regulate the steering and damping characteristics in the Comfort, Normal and Sport modes. The light alloy wheels range from 16 to 18 inches and come in numerous new designs.

The revised ŠKODA OCTAVIA saloon and estate version will be available in the first markets from the end of the year. Deliveries will begin in early 2017.