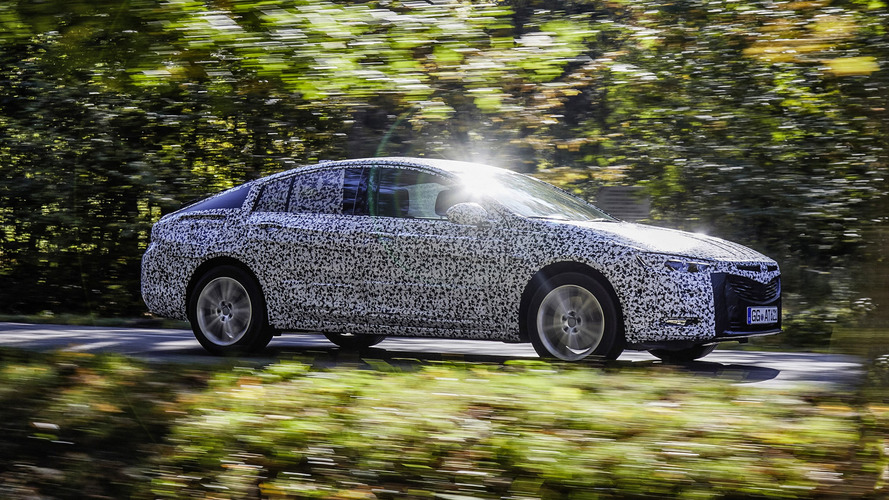 The next-generation Opel Insignia with a Holden badge is heading to Australia where it will have a beefy V6 version serving as the range topper.

[update] Opel has announced the new model will be called "Insignia Grand Sport" (like a Bugatti) and it will make its public debut in March 2017 at the Geneva Motor Show. It's going to be up to 175 kg (385 lbs) lighter than the outgoing car, despite growing in size by 55 mm (2.1 inches).

Basically the Aussie version of the next-gen Opel/Vauxhall Insignia, the all-new Holden Commodore will arrive in the Land Down Under at the beginning of 2018. It will be available from day one in a strong flagship version rocking a naturally-aspirated 3.6-liter V6 engine pushing out 308 horsepower (230 kilowatts) and 273 pound-feet (370 Newton-meters) of torque channeled to an AWD setup with torque vectoring. Output will be delivered to the road with help from a nine-speed automatic transmission, representing a first for Holden.

By making the switch to the 2017 Insignia’s underpinnings, the new Commodore will shave off a whopping 200 - 300 kilograms (440 - 661 pounds) of weight, but as most of you know by now, the new platform will also mean a shift to a standard front-wheel drive layout. Lesser versions of the Commodore are going to be offered with turbocharged 2.0-liter gasoline and diesel engines sending their power to the front axle.

Holden has plans to sell the next Commodore both as a liftback and as a wagon, with optional goodies such as an adaptive suspension, matrix LED headlights, and a head-up display. There’s also going to be a latest-gen infotainment system with an eight-inch touchscreen and support for Apple CarPlay and Android Auto integration.

As far as the Insignia version for Europe is concerned, Autocar has learned that despite the drastic diet, the new midsize model will substantially grow in size. It's going to be 55 mm (2.1 inches) longer than its predecessor and its wheelbase will be stretched by a considerable 92 mm (3.6 inches). This will translate into more legroom for passengers sitting in the back and a larger trunk for all body styles.

The Euro-spec model with the Opel and Vauxhall badges will be available with a 1.5-liter turbocharged gasoline unit, which is an evolution of the existing 1.4-liter, rated at 163 hp (121 kW) and 184 lb-ft (249 Nm) linked to a six-speed manual. This hardware will grant the midsize model from Rüsselsheim with a sprint to 62 mph (100 kph) in an estimated 8.5 seconds and onto a top speed of 130 mph (209 kph), also estimated. To get an idea about the car's weight, the prototype Autocar had the chance to test drive tipped the scales at around 1,400 kg (3,086 lbs).

There’s also going to be a turbocharged 2.0-liter unit with 247 hp (184 kW) mated as standard to an all-wheel drive setup and an eight-speed auto ‘box. Details regarding diesels are scarce at this point, but we do know these will have from 110 hp upwards, and let’s not forget there’s that spicy rumor about a new beefy biturbodiesel unit.

Opel will take the online wraps off the all-new Insignia in December and will have it on sale across the old continent from early 2017.

Holden has today revealed first details of the all-new, next-generation Commodore ahead of its Australian launch in early 2018.

Australia’s first look under the bonnet of the cutting-edge new Commodore reveals a car that will set new benchmarks in its segment for technology, style, practicality and driving dynamics.

Headlined by the V6 flagship model, the first ever imported Commodore will honour the legendary nameplate by being the most technologically-advanced Holden ever. With a cutting-edge all-wheel-drive system channeling 230 kilowatts and 370 Newton metres to the road, combined with adaptive suspension technology, a company-first nine-speed automatic transmission and torque-vectoring all-wheel drive, the next-generation Commodore is set to cement the iconic nameplate’s reputation for class-leading driving dynamics and on-road refinement.

Based on General Motor’s new ‘E2’ global architecture, engineered in Germany and shared with the Opel Insignia, the new Commodore has also been co-developed under the expert and watchful eye of Holden’s Australian engineers to ensure the all-new Commodore continues a four-decade tradition of setting new benchmarks.

“Holden has been engaged in this program from the outset to ensure the next-generation Commodore lives up to its legendary nameplate,” said Jeremy Tassone, Holden’s Engineering Group Manager for Vehicle Development.

“Although we are remain in the early stages of the Holden development process, this is an absolutely world-class car. We’ve taken a precision-engineered German car and endowed it with Holden DNA. It drives like a Commodore should.

“We’ve had our Holden engineers engaged in this global program from the outset and we’re continuing to do extensive tuning and development, racking up thousands of kilometers, at our Lang Lang proving ground in Victoria to ensure it’s got that Holden magic.

“Of course, it helps that the underlying platform is absolutely world class! This global vehicle program, led by Opel in Germany, has produced a phenomenal base for us to work from. The genuinely cutting-edge all-wheel-drive system using active torque vectoring provides incredible traction and handling finesse. The key is what is dubbed the ‘Twinster’ rear drive module. Essentially, the traditional rear differential has been replaced with two individual clutches that not only save weight and improve packaging but provides virtually instantaneous active distribution of torque to the required wheel.

The V6 engine with the all-wheel-drive system is a combination that the Holden team drove into the global vehicle program because we know our customers and this performance option is important to them. While it may not be built here, we’ll deliver a Commodore that our customers will love in 2018,” said Mr Tassone.

Commodore’s evolution reflects the transformation of the Holden brand and company as it moves to full-line importer of vehicles. But just like Commodore, Holden will remain a powerhouse of the industry and of the local motoring landscape.

“The next-generation Commodore will reset benchmarks in its class, as has every Commodore since 1978,” said Holden’s Executive Director of Sales, Peter Keley.

“This next-generation vehicle is changing and bringing incredible technology and refinement with it but will continue to offer customers that quintessential Commodore experience they have loved for nearly four decades.

“With the first-ever imported Commodore, we’re delivering our customers an absolutely world-beating vehicle, with the space, practicality, technology and driving pleasure that Commodore has always provided. This is a different kind of Commodore to what has come before but lives up to the nameplate in every respect and will carry our heritage with pride.”