The RF also gets a unique charcoal gray paint job.

[UPDATE] 13 photos added to gallery below

Mazda Design will show off the styling MX-5 Miata’s versatility at November’s SEMA Show with a pair of tuned examples with very different styles. The MX-5 RF Kuro focuses on style, and the Speedster Evolution is all about performance.

The Speedster Evolution is the bigger attention grabber of the pair and is an even more hardcore take on last year’s Speedster. Mazda engineers manage to take the stripped down roadster’s weight down by over 100 pounds from last year’s 2,078-pound vehicle. With the weight somewhere below the 2,000-pound mark sports car would probably be quite a canyon carver. Mazda enhances the minimalist aesthetic by painting the tuned Miata White Ether and using black accents. 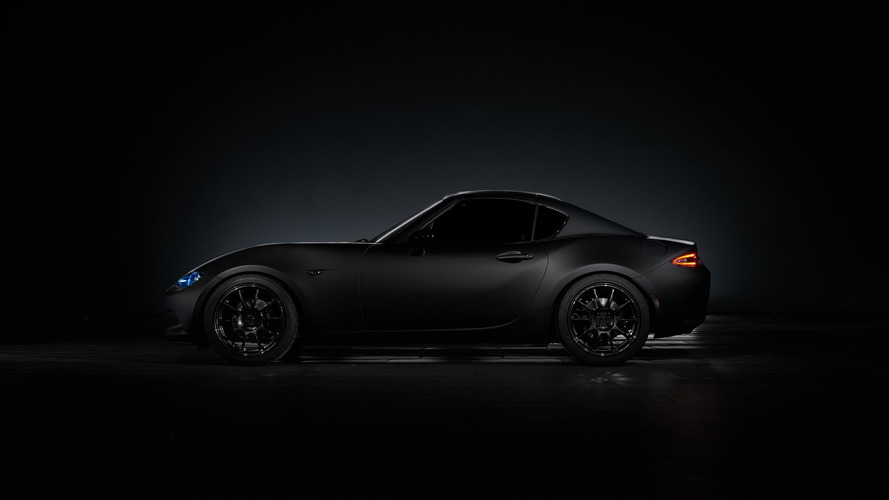 Rather the stripping down for maximum speed, the MX-5 RF Kuro is the more fashionable member of this pair. Kuro means “charcoal” in Japanese, and it wears a concept paint color that’s dark gray with a semi-matte metallic finish. The result is a roadster that would look great during a drive at dusk. In addition to the unique shade, Mazda also fits a set of 17-inch Rays wheels in a matching tone. The sole performance upgrade is an adjustable suspension that comes from the Global MX-5 Cup cars.

While it’s conceivably possible a shade like the one on the Kuro could arrive in showrooms, don’t expect to windshield-less Miata, unless you want to saw it off yourself.

If you have $51,775 in addition to the price of buying an MX-5, then Flyin' Miata in the United States can install General Motors LS3 6.2-liter V8 with a more-than-adequate 525 horsepower (391 kilowatts). The kit also adds a Tremec six-speed manual gearbox to handle the massive increase in power. The setup only adds 264 lbs (119 kg), so acceleration would likely be extremely brisk.

Mazda first introduced the MX-5 Speedster to the world at the 2015 SEMA show, taking the base car's lightweight ethos to a new level.  For this year's show, Mazda's design team took a big step forward, creating the Evolution, painted White Ether, taking the concept a step further with more than 100 lbs. removed from last year. Now just under 2,000 lbs., MX-5 Speedster Evolution is approximately 350 lbs. lighter than a stock MX-5 soft top.

Mazda also is displaying the MX-5 RF Kuro concept, based on the 2017 MX-5 Retractable Fastback that will be on sale early next year. MX-5 RF Kuro is painted in a semi-matte metallic concept color developed in-house called "Kuro," which means "charcoal" in Japanese. It rides on 17x7.5-inch RAYS forged wheels, 215/45R17 BFGoodrich Rival G-Force tires and the adjustable suspension from the Battery Tender Global MX-5 Cup Presented by BFGoodrich.

Both concepts were conceived by Mazda Design Americas to showcase contrasting directions that create a "Mazda Premium" experience while paying homage to Mazda's performance heritage. They were designed and built in-house by Mazda's Design team in Irvine, California.

MX-5 Speedster Evolution and MX-5 RF Kuro concepts will be on display at the SEMA Show on November 1-4 in the Mazda booth, #11647, in the North Hall of the Las Vegas Convention Center.

Mazda North American Operations is headquartered in Irvine, Calif., and oversees the sales, marketing, parts and customer service support of Mazda vehicles in the United States and Mexico through nearly 700 dealers.  Operations in Mexico are managed by Mazda Motor de Mexico in Mexico City.  For more information on Mazda vehicles, including photography and B-roll, please visit the online Mazda media center at www.mazdausamedia.com.