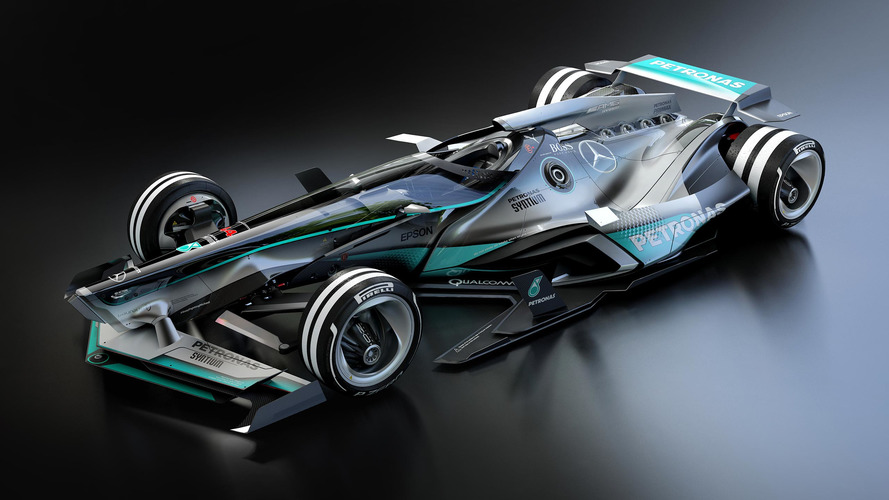 Here's one suggestion for the future direction F1 design could take. And it's wild

Formula 1 is going through a design revolution for the 2017 season. The cars will become wider, the tires bigger, and they will generate significantly more downforce than the current generation of machine. They will look very different, though they should still be recognizable as an F1 car. But what will they become further down the line? These renders, commissioned by sister website Motorsport.com attempt to answer that question.

They show the Mercedes entry for the 2030 season and, though the general architecture is the same, it is radically different to the cars on the 2016 grid. Take the side pods, for instance, which sweep back at an extremely acute angle, are notably low-profile, and are topped by a small winglet.

From beneath, a huge dual-level spar spears out towards the front wheels, presumably doing the same sort of job as the “barge boards” currently used. A vertical element mounted on top appears to direct airflow into the sidepod.

The nose tapers to a knife edge. The front wing hanging below is a relatively simple, shallow-angle V-shape with outer elements curving downwards.

At the back, the power unit is tightly packaged, though the engine cover itself is less complex than we currently see. The area around it plunges down below the level of side pod, to collect and direct air to the rear wing. Like the front wing, it is a relatively simple device, bridging the two rear suspension shrouds.

Even the running gear has been re-imagined, the front wheels apparently attached to the car by just a single suspension element and the steering rod. The wheels themselves are deeply dished, but the hub sprouts out level with the outer edge of the rim.

The most intriguing element of the whole design, though, is the cockpit canopy. It starts rising out of the nose only a few inches back from the tip, and flows up until it’s level with the top of the driver’s head. The peak is roughly level with the steering wheel, and the sides slope down towards the rear of the cockpit, leaving the driver with an unrestricted view to the side.

So what do you think? Is this a realistic concept for the F1 cars of just 14 years into the future, or a pie in the sky fantasy?