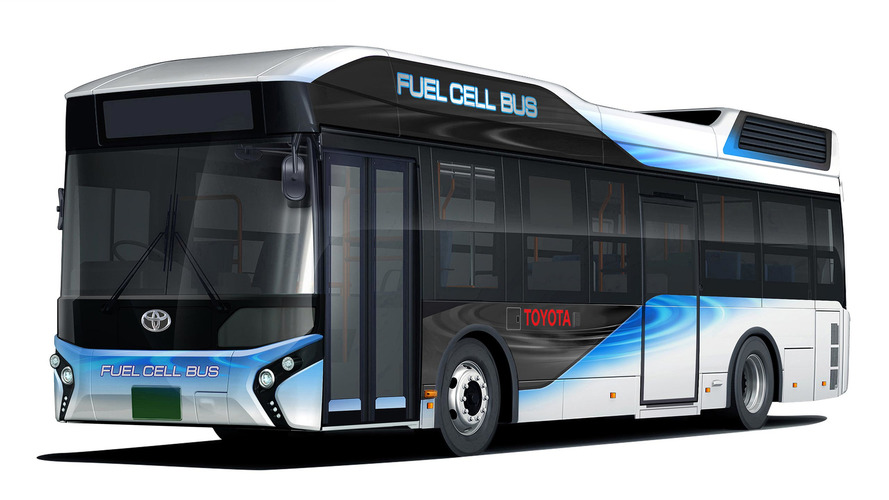 Six hundred liters of hydrogen gives the buses a range over 124 miles.

Toyota's hydrogen fuel cell technology will make the jump from the boldly styled Mirai sedan to the mass transit market in early 2017 because the Japanese brand will begin selling the powertrain in buses. They won't be cheap with prices estimated at around 100 million yen ($961,000 at current exchange rates), according to the Asahi Shimbun. Toyota will keep the green vehicle's sales goals realistic, though. The automaker will aim to sell 100 or more hydrogen-fueled buses before the 2020 Summer Olympics in Tokyo. Two of them will start driving routes in the city next year.

The Toyota Fuel Cell Bus will essentially use a version of the Mirai's powertrain, but it will be on a much larger scale. Ten tanks will carry 600 liters of hydrogen, and that will give the vehicles a range over 124 miles (200 kilometers), the Asahi Shimbun reports. Refueling will only take around 10 minutes. Two on-board fuel cell stack will power a pair of electric motors with a total system output of 306 horsepower (228 kilowatts) and 494 pound-feet (670 Newton-meters).

The system will have an energy capacity of 235 kilowatt-hours. During emergencies like natural disasters, evacuation sites can harness the powertrain for keeping the lights on. For reference, the average household in the United States uses 901 kWh per month. So these buses should be able to keep things running for at least a couple days.

Toyota is putting a huge investment into the future of hydrogen fuel cells, and we should see more of them on the road from the company, soon. Rumors hint that the range-topping version of the next-gen Lexus LS could use the tech. As further evidence towards that offering, the LF-FC concept, which previewed the upcoming luxury sedan, used the H2 drivetrain.

Honda is also joining the segment with its Clarity Fuel Cell sedan. It has a range of over 300 miles, but the model is only currently available in California – like the Mirai. The lack of a hydrogen refueling infrastructure in the U.S still makes nationwide sales practically impossible.

Toyota plans to introduce over 100 FC buses mainly in the Tokyo area, ahead of the Tokyo 2020 Olympic and Paralympic Games. In view of this, the FC buses will be sold for the first time in Japan in early 2017, so as to help increase the level of understanding by the general public of the utilization of FC buses as a form of public transportation.

Moreover, in preparation for the Tokyo 2020 Olympic and Paralympic Games, the number of FC buses being introduced will increase steadily going forward. Together with this, Toyota aims to engage continuously in the diligent development targeted at the expansion of the introduction of the new FC buses from 2018 so as to contribute to the realization of a hydrogen-based society.

The Toyota FC Bus was developed by Toyota, based on the company's experience in developing FC buses together with Hino Motors, Ltd. (Hino). The Toyota Fuel Cell System (TFCS)1, which was developed for the Mirai fuel cell vehicle (FCV), has been adopted to provide better energy efficiency in comparison with internal combustion engines, as well as to deliver superior environmental performance with no CO2 emissions or substances of concern (SOCs) when driving.

The bus also uses a high-capacity external power supply system. With a power supply capable of a 9 kW2 maximum output, and a large capacity of electricity supply at 235 kWh3, the FC bus can be used as a power source in the event of disasters, such as at evacuation sites such as in school gymnasiums4 or, its electricity supply can also be harnessed for home electric appliance use.

The Toyota Group considers the use of hydrogen to be a powerful source of energy for the future. Toyota has released the Mirai FCV, while also engaging in the technological and product development of FC buses, fuel cell forklifts, as well as stationary fuel cells for use in homes. Going forward, the group will accelerate developments in a unified manner, so as to contribute to the realization of a hydrogen-based society.

2 Possible electric power varies depending on the performance of the power supply unit.

4 Requires wiring work at the facilities.