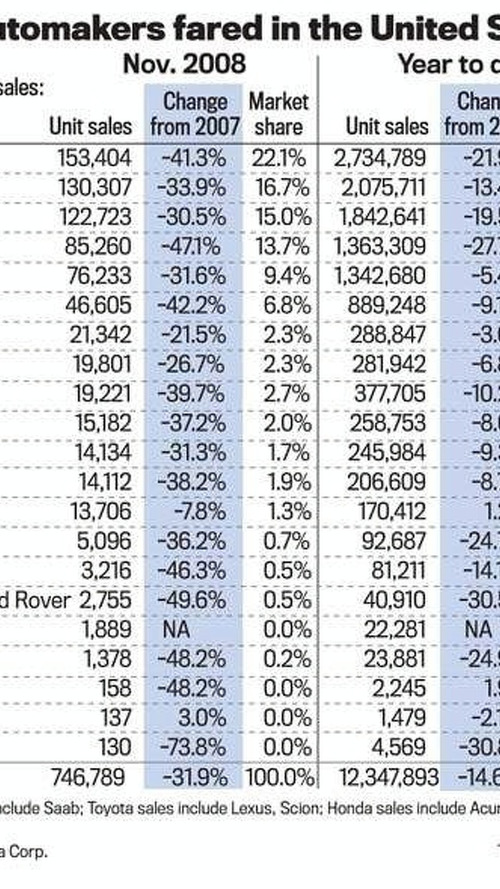 US market sales are down to a 26-year low. GM sales fall 40 percent for November, 47 percent for Chrysler. Sales also collapsing for Japanese car makers. Toyota had a 34 percent drop, Nissan 42, and Honda was at a 31 percent decline.

Could things possibly get worse? Maybe not, but they may stay this bad through 2009 and that may mean a completely different auto industry landscape in the United States a year from now.

November sales figures are in and they're not looking good for anybody, including the formerly fearsome Japanese brands.

For November 2008, compared to the same month last year, GM sales were down more than 40 percent. Chrysler's were down 47 percent. Ford seems to be doing much better, they were down only 30 percent compared to an overall drop of 36 percent for the industry as a whole.

This collapse in sales has also hit Japanese import brands in the US market. Nissan sales were down 42 percent, Toyota almost 34 percent and Honda was at a 31 percent drop.

Adjusted for an annual rate, November sales reflect a US market of 10.8 million vehicle sales per year. This overall market number is important. Sales in the US peaked at around 17 million in the 2000s. Where that sales number now goes could determine whether one or two of the Big 3 survive 2009. Chrysler and GM are in the worst positions in terms of falling sales and a lack of cash. Both automakers are in desperate need of operating capital and are anxiously awaiting news on a government bailout.

Sales are at the lowest they've been in 26 years. Per capita sales are down to lows not seen since the 1950s.